WHAT THE EXPERTS SAY: Journalist and Author Monte Dutton

Sports journalist turned novelist Monte Dutton brings us THE INTANGIBLES, a novel about a Southern town struggling to integrate in the late 1960s. Those of us who experienced the 1960s comprehend the effects -- at least on some level-- from the unsettling series of events of that decade. Dutton wrote his book to describe the problems faced by all sides in the integration efforts. A reviewer claims that THE INTANGIBLES is a “compelling, finely crafted reflection of a mighty turbulent time and place in our history” that “blends perfect balance of warmth, humor, action, terror and depth.”

Dutton, who currently lives in South Carolina, covered Nascar racing as a reporter for 20 years. He has happily turned to writing fiction, because, he says, “The best way to tell the truth is to write fiction.” He also enjoys playing the guitar and writing songs, and loves sports. THE INTANGIBLES is his second novel; his first, THE AUDACITY OF DOPE, was published in 2011.

Don't miss the opportunity to enter a Giveaway at the end of his interview.

Q:  What inspired you to write THE INTANGIBLES? Did you base it on real-life experiences and/or events?

Monte Dutton: I was a child during the period covered by THE INTANGIBLES, but my memories are vivid. Some characters were created with real people in mind, just as many were not. The same is true of the events described therein. It’s fair to say that the novel is loosely based on my recollections of school desegregation and the civil rights movement as it affected my hometown.

Q:  Is THE INTANGIBLES a story about The South and overcoming bigotry? Or is it about football and how it can contribute to the solution of social problems?

Monte Dutton: It’s a story of the former with the experience of a high school football team providing a foundation. My goal was to depict the cultural change that complicated the lives of black and white alike.

Q: How do you engage readers to care about your characters? Did you base them on real people?

Monte Dutton: It’s pretty simple. By creating characters who interested me, I figured I was creating characters who would interest readers. It was all a matter of being able to think the way the characters thought: to imagine myself as them when I was writing. The world changed rapidly. Fear of those changes was the chief instigator of the disorder and violence that occurred.

Q: What is the significance of the title THE INTANGIBLES?

Monte Dutton: It’s a double entendre. The Intangibles were the slogans on the high school’s locker-room walls, and when the schools were integrated in Fairmont, the town folk were plunging into a new way of life whose effects were difficult to anticipate or measure.

Q: Did you write THE INTANGIBLES to deliver a message? To entertain? To educate?

Monte Dutton: All of those. I wanted to depict the hardships of the time. I wanted to remind younger generations that the cataclysmic events of their lives are not unprecedented. I tried to write in an irreverent vein that would create amusement, but I also tried to depict the late 1960s in the South authentically.

Q: What makes a good villain? Does THE INTANGIBLES have a villain? Or is the concept of bigotry the “villain?” Do you need a villain to have a hero?

Monte Dutton: The chief villain is the bitter ex-football coach, Preston Shipley, who has been moved to principal of Fairmont High School. A conspiracy gathers around Shipley’s bitterness, which is more personal than political, and draws other villains into its web. Bigotry plays a role in Shipley’s character that is similar to the role of slavery in the Civil War. It isn’t his only consideration, but, without it, he wouldn’t have succumbed to hate and self-destruction.

Q:  Your book is set in the late 1960s when there were no cell phones, personal computers, or internet.  How much research did you conduct to assure historical accuracy? How important is accuracy to credibility?

Monte Dutton:  The story begins on the day of JFK’s assassination, then jumps four years ahead. The rest occurs in 1967-68. I researched the times in terms of when events occurred: the assassinations of RFK and Dr. Martin Luther King, Jr., the Vietnam War, South Carolina’s Orangeburg Massacre, and other considerations, such as popular television shows and hit songs. I blended historical research with my own memories of the times. If a story is set in the past, it seems to me that it has to ring true if it is to illuminate as well as entertain.

Q: You have been a reporter and have written non-fiction books. What is different about the two approaches? Do you prefer fiction over non-fiction? Were you able to apply one to the other?

Monte Dutton: I have little desire to write non-fiction again, though I write the occasional free-lance story. Journalism isn’t really about telling the truth. It’s about getting as close to the truth as possible by reporting what people say the truth is. It’s not the same thing. My favorite irony: The best way to tell the truth is to write fiction. I really love it. I’m never happier than when sitting at my laptop, describing a world of my own invention and telling a story that fits that world.

Monte Dutton: I’m working on the second draft of Crazy by Natural Causes, a contemporary novel set in rural Kentucky. In a sense, Chance Benford in Crazy -- like Riley Mansfield in my first novel, The Audacity of Dope -- is a person whose life is uprooted because, well, the damndest things happen to him. Chance rolls with this flow better than Riley, but both novels are about the absurdity of life. Audacity is more of a suspense thriller. Crazy has its share of suspense, but Riley and Chance don’t have much in common. Riley has a quiet determination and stubborn streak that Chance lacks. Chance learns to drift along where the rivers of his life happen to flow.

Q:  Tell us about Monte Dutton? What do you like to do when you’re not working or writing?

Monte Dutton: I love playing guitar and writing songs. I love sports, most notably the football programs of Clinton High School and Furman University. I’ve had a lifelong passion for the Boston Red Sox. I still watch NASCAR races on TV, though I don’t have much interest in going to the track again. Writing daily blogs on my website (montedutton.com) has been good therapy and a handy way to get ready to write fiction. The daily blog is like singing scales in a choir or chorus; it’s a warm-up exercise as well as a promotional device for raising interest in my novels.

He spent 20 years (1993-2012) writing about NASCAR for several publications. He was named Writer of the Year by the Eastern Motorsports Press Association (Frank Blunk Award) in 2003 and Writer of the Year by the National Motorsports Press Association (George Cunningham Award) in 2008. His NASCAR writing was syndicated by King Feature Syndicate in the form of a weekly page, "NASCAR This Week" for 17 years.

The Audacity of Dope, 2011 (Neverland Publishing) was his first novel, and Neverland recently published his second, THE INTANGIBLES. Another, Crazy by Natural Causes, is in the works. 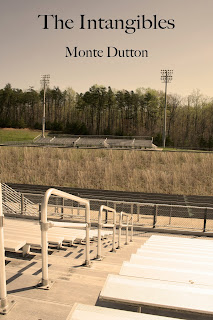 It’s 1968. The winds of change are descending on Fairmont and engulfing the small South Carolina town in a tornadic frenzy. The public schools are finally being completely integrated. Mossy Springs High School is closing and its black students are now attending formerly all-white Fairmont High; the town is rife with racial tension. Several black youths have been arrested for tossing firebombs at a handful of stores. White citizens form a private academy for the purpose of keeping their kids out of the integrated school system. The Ku Klux Klan is growing.

Reese Knighton arrives on the scene at precisely the right time. The principal of Fairmont High School, Claude Lowell, becomes superintendent of the school district. Lowell chooses Preston Shipley, currently the football coach, to replace him as principal and hires Knighton to coach the team, thus forcing Knighton to find common ground with Willie Spurgeon, the successful Mossy Springs coach who has been passed over for a job he richly deserves.

At The Intangibles’ center is the Hoskins family, their relationships to those living within the town of Fairmont giving rise to a memorable cast of characters. Tommy Hoskins is a local businessman and farmer who is a supporter of the team, on which his older son, Frankie, plays. Frankie’s best friend is Raymond Simpson, who lives in a shanty on the Hoskins’ farm. Another of Frankie’s friends, Ned Whitesides, is a spoiled bigot. Clarence “Click” Clowney is the talented, rebellious quarterback from Mossy Springs. Al Martin is the staunch black tackle who becomes the glue that keeps the integrated team together. Twins James and Joey Leverette are the sons of professors at local Oconee College. Curly Mayhew coaches rival Lexington Central. Laura Hedison is a white cheerleader. Jorge Heredia is a tennis player at the college who sells drugs on the side. Aubrey Roper is a college girl who exerts a corruptive influence on Frankie Hoskins. The county sheriff, a turncoat within the team, Ned Whitesides’ father, the loyal assistants, militants both black and white, a doctor, a lawyer, local businessmen, and others all add fuel to the fires of prejudice and fear of the unknown that are raging in the town of Fairmont.

This is a story of a high school football team that puts aside its differences, never realizing that, outside its bounds, the world is unraveling. It’s a story about the cultural changes, good and bad, that take place when two societies shift and finally come together.

Ultimately, THE INTANGIBLES is a story of triumph achieved at considerable cost.

ENTER THE GIVEAWAY
US entrants only, please
a Rafflecopter giveaway