Fantasy and paranormal romance author Rae Z. Ryans writes about dragons, witches, and fairies in her book CHIVALRY AND MALEVOLENCE. She is a fan of history and a fantasy aficionado, and blends the two in her writings.  Ryans was born in Alaska, raised in New Jersey, and currently lives in Alabama with her four cats, three dogs, three children, and her husband.

In the following article Ryans explains about the world of dragons. Don't miss the giveaway opportunity at the end of the article.

Fantasy creatures come in all shapes and sizes, but perhaps one of the most elusive is the dragon. Throughout mythology, we see these strange beasts and learn of heroic tales, but when writing fiction it becomes harder to paint the picture. When we hear dragon, we all hold our own mental image. Maybe you see the large leviathans breathing fire or a massive swimming sea serpent. Perhaps you visualize something else.

When writing CHIVALRY AND MALEVOLENCE I wanted dragons on Alfheim. There were some dragons in Norse mythology, but not much in the way of prose. Still, I’d always held a fascination with the creatures of lore. This is why I chose dragons.

Constructing the dragon took a lot of imagination, at least on the inside. Information on dragons comes solely from mythology, but I’m not one to follow the rules. These are my dragons after all. However, I’d always loved the dragons from World of Warcraft and Richard Knaak’s novels.

Those dragons talked, transformed, and held ancient magic. The idea just fit perfectly into my strange and unfamiliar world for Thomas to investigate. Later in the series, more light sheds upon the beasts he recalls from fairytales. Mine weren’t all that different if you look on the outside. Inside they weren’t kind, gentle creatures, but they held the potential of feeling such emotions. That notion stemmed from my belief that good and evil rest in all of us.

They held consorts, not untypical as they lay eggs and hatch clutched, but the young Prince Drust of Durkheim discovered love. The idea of a dragon loving one was difficult to establish when the leviathans of popular myth lacked the ability. I’ll admit that I’ve received the most criticism on this fact, but I have faith in my dragons, my world, and my writing. In turn, it’s also applied to my characters.

Hold faith and love for what you’ve created, because if you make it, it’s yours to do with as you please.

Writers shouldn’t fear stepping outside of a mold when creating fantasy creatures. In less than thirty years, look at the transformation of the vampire and werewolf. Both creatures were once fearsome foes, but now they grace love stories or have become the heroes. We rewrite histories and create universes, so why not create a dragon to torment, love, or save the day?

She claims to own a pink elephant that buy shoes and books. While there is plenty of proof that Rae loves both, no one can prove the existence of Punky the elephant. She would point out that we can’t disprove it either.

All kidding aside, Rae is an alternate ego who enjoys writing urban and historical fantasy/paranormal in her spare time. With a deep love for mythology and history, she blends the two together, and creates new worlds, heroic obstacles, and weaves dark tales. These works are often loosely inspired by Norse Mythology, but with plenty of unique twists.

She is currently working on a secret (shh) new steampunk series and continuing to write the Nine Realms series: Alfheim and Midgard. http://www.raezryans.com  http://www.facebook.com/raezryans

About  CHIVALRY AND MALEVOLENCE (new version) 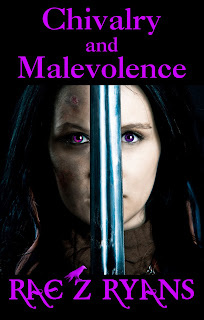 Blanked in white snow, Alfheim is off-limits to mankind. The elves and fae of the Unseelie court ruled over their lands, inciting chaos for the sake of power. The young Princess Morgana, forced to wear protective layers over her face, disagreed with the ways of her people. She craved love, but love is not the Unseelie way.
The Knight and his horse traveled toward home after two years on the battlefield. Within moments, the world transformed before his eyes as green gave way to white. He blinked as Achilles stirred. Strange creatures wielding swords and axes surrounded and captured him. They tossed him into a dank prison where he awaited his death.
With no hope of survival or escape, he prayed for the shrouded woman, who showed him kindness and healed his wounds.
Social Links
Facebook
Twitter: http://www.twitter.com/authorraezryans
GoodReads
Amazon Author
Google+
Pinterest
LinkedIn
Where to Purchase
Amazon
Smashwords
B&N
Kobo
iTunes
Diesel Books
Sony
CreateSpace
Giveaway
First Prize: $20 Amazon Gift Card
Second Prize:  Rae Z. Ryans’ Bookmark
Link to Rafflecopter 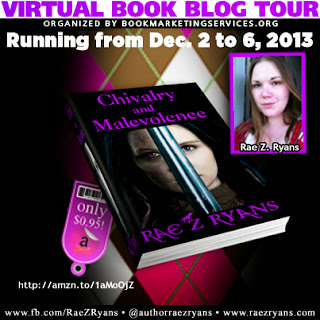