WHAT THE EXPERTS SAY: Author and Journalist Catherine Feeny

Author and journalist Catherine Feeny imagined what it might be like to fall for a movie star and move with him to Hollywood.  In “Into-the-Woods” style, her new book FLOWER GIRL takes readers to the next step of the fairy tale, which, according to reviewers, includes many twists and turns.

FLOWER GIRL is Feeny’s fifth novel. She also is a freelance journalist and writes short stories and drama for BBC Radio 4. She currently lives in London – where she loves to cook, especially to bake bread. She also lived in the U.S. for four years and spent time in France and Spain.

Q: Would you characterize FLOWER GIRL as a romance or mystery or…?

Catherine Feeny: FLOWER GIRL is a romance, but it has elements of mystery and intrigue too.

I had always wondered what would happen if you got to live the dream: to meet a movie star and have him whisk you off to Hollywood. The answer I came up with was that, however handsome and charismatic his image might be, you would still wake up with a real man. That idea intrigued me and it was what I went on to explore in the novel.

Q: How do you make FLOWER GIRL “an emotional roller coaster, well worth the ride!” – as described by a reviewer? How do you engage your readers to care about the “flower girl”?

Catherine Feeny: Let me answer the second question first. I think readers care about Violet, whose work as a freelance florist gives the novel its title, because she is a compelling and believable character, who has to find a way of dealing with a remarkable sequence of events.

Once you care about Violet, the twists and turns of the plot are an emotional roller coaster because you experience them with and through her.

Q: Would you describe Violet Lake, your protagonist, as a modern, independent woman? How important is her type of character to the development of your story?

Catherine Feeny: Yes, she is modern and independent. She also has her feet on the ground and doesn’t stand in awe of anybody. That is why she is able to navigate a course through the craziness that is showbiz Hollywood.

The story is mostly described through Violet’s eyes, so she is immensely important to its development. Initially she is completely out of her depth in the world into which she has tumbled, but she is not naive and she is certainly no fool. She makes sense of her situation by means of a level-headed gaze and a good pinch of sardonic wit. Her journey is also the reader’s.

Q: Were you able to use your journalist skills to write a fictional novel? Or is the difference between reporting news and creating a story difficult to cross?

Catherine Feeny: I very much used what I learnt as a journalist when writing FLOWER GIRL. In particular my time in the Shetland Isles, where I lived until recently. The Shetland Isles are Britain’s most northerly archipelago, situated fifteen hours by ferry from the Scottish mainland. They have their own distinct identity, and an oral storytelling tradition still thrives there.

As a journalist I met up with lots Shetland folk, and heard the wonderful tales they had to tell. In the process I fell in love with the twists and turns of spellbinding narrative, and that is reflected in the intricate plot of FLOWER GIRL.

Journalistic writing must be punchy, immediate, and full of arresting turns of phrase. I also incorporated those characteristics into the language of FLOWER GIRL.

Q: How would you define a “villain”? Does FLOWER GIRL have “villains”?

Catherine Feeny: A villain is an antagonist; the person who endeavours to prevent a happy ending. Oh yes, FLOWER GIRL has several, my favourite being the malevolent Harold Acker, of whom I will say no more. People will just have to read the novel!

Q: Did you write FLOWER GIRL primarily to entertain? Did you also write it to educate or deliver a message?

Catherine Feeny: I did write FLOWER GIRL primarily to entertain, which goes back to my delight in telling a cracking good story. I certainly didn’t intend to educate, but any novel is bound to indicate its writer’s approach to life, and give a sense of their priorities.

Q: In addition to writing your novels, you are also a journalist. When did you first realize that you are a writer? What has inspired you to continue to write?

Catherine Feeny: I have written ever since I was a child. I continue because I can’t imagine not doing so. There would be a void in my life that nothing else could fill.

Q: How is FLOWER GIRL different from your four previous novels?

Catherine Feeny: My four previous novels were written before I lived in Shetland, and their aim was to make a political point. Although they did have romantic elements, FLOWER GIRL represents a move into a different genre.

My four previous novels were published by Hodder & Stoughton. FLOWER GIRL is published on Amazon Kindle. That was another big departure for me, but I am convinced that ebooks are the future. I like the speed with which they can come onto the market, and the way in which, as a writer, you have control over every aspect of the publishing process, from choosing a cover to marketing. They also put authors into a new and much closer relationship with their public. These are exciting times for writers and readers alike. It is no exaggeration to say that we are in the throes of a literary revolution.

Catherine Feeny: I’m currently gestating an idea for another novel, but I’ll leave it at that. I’m a bit superstitious about a work in progress!

Q: Tell us about Catherine Feeny. What do you like to do when you’re not writing or working?

Catherine Feeny: I love to cook. In particular I am a passionate breadmaker. The alchemy that happens when you bring so few ingredients together never ceases to thrill me. And the smell of fresh bread is just magical!

Catherine Feeny is the author of four previous novels, published by Hodder & Stoughton. She also teaches Creative Writing, works as a freelance journalist, and writes short stories and drama for BBC Radio 4. She currently lives in Lincoln UK, but has spent time in France and Spain, and lived in the United States for four years. Her travels around America by Greyhound bus at the age of sixteen were among the inspirations for FLOWERGIRL. 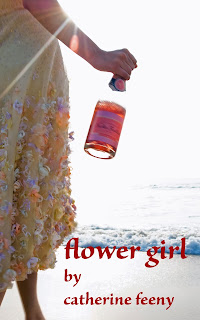 FLOWER GIRL tells the story of how a night of passion leads London florist Violet Lake to leave her former life behind, and fly off with her movie star lover to live with him in his Hollywood mansion. Once there, however, Violet’s fantasy starts to unravel, and she finds herself catapulted into an adventure which carries her across the entire American continent, and leaves her future happiness hanging in the balance.

Where to Purchase
Amazon US
Amazon UK