Russ Colchamiro strives to write books that his readers “can’t wait to finish.” Readers of his science fiction novel, CROSSLINE, say the book is “a good old fashioned yarn with just the right touch of action, humor and a few nice twists thrown in.” Colchamiro is drawn to science fiction because of the scope and breadth it gives to his imagination. He approaches his characters in depth to understand their motivations. Although he focuses on giving the reader a “fun ride”, he also offers thin layers of his own beliefs.

Colchamiro has also written the Finders Keepers sci-fi comedy series, including, FINDERS KEEPERS, GENIUS DE MILO, and ASTROPALOOZA. He is a contributing editor to a new science-fiction anthology, LOVE, MURDER AND MAYHEM, which he plans to release in July. He currently lives in New Jersey with his family, including his twin children (girl and boy.)

Q: What draws you to write science fiction?

Russ Colchamiro: Regardless of the genre, my goal is to write a great, compelling story that readers can’t wait to finish, so the fundamentals always need to be there—plot, characters, pacing, etc. Given that, science fiction allows me to dream as big as I want, or take the characters—and thus the readers—on a journey that wouldn’t be possible otherwise. Within these wild pulp adventures, I like to juxtapose the big, epic questions (What does it all mean? Is life itself random? Is there a grand design? Where do I fit in?) with the ‘smaller’ struggles of everyday life.

So even though the characters may be on some kind of intergalactic quest, or in a ‘foreign’ land (that happens to exist in another quadrant of time and space), the struggles they face are all too human. Love, guilt, fear, joy, passion, loyalty, family, sex, desire, and so on. And if they happen to be facing off against a galactic threat, all the better. When you sit down to read, I want the edges of each page to melt away.
Q: Reviewers say that in CROSSLINE your “Characters felt like people I knew from my own life.” When writing science fiction, how do your approach your characters? Are they bigger-than-life resembling super-heroes? Or are they, as reviewers suggest, “people I knew?”

Russ Colchamiro: My process is to climb inside the hearts and minds of every character I write, whether they are the protagonists, antagonists, or supporting players, and do my best to understand their motivations, so that I can deliver intimate character studies within the grand adventure. Whether ‘everyday people’ or more flamboyant personalities (my cast of players include lots of both) I want each one—male, female, young, old—to feel real and grounded within the confines of the narrative … quirks, contradictions, and all, even down to their speech patterns and cadence. Some characters are loosely based on people I know (or knew), others are amalgams, with the rest pure invention, reflecting various elements of my own personality.

Q: Reviewers also say CROSSLINE is a “Solid blending of science fiction and satire” and “Just the right touch of action, humor and a few nice twists thrown in. It never takes itself too seriously while still grabbing you by the shirt.” How useful was humor to tell your story?

Russ Colchamiro: Humor appears in all of my novels. It’s a natural element of my writing style. But there’s a distinction between sprinkling humor within the narrative, and writing an all-out comedy, which I have certainly done with the FINDERS KEEPERS trilogy. CROSSLINE has its humorous moments for sure, but it’s not a comedy, per se. It’s action/adventure/mystery, with my usual time-bending shenanigans and humor woven in.

Q: Did you write CROSSLINE primarily to entertain your readers or did you embed a few messages or themes along the way?

Russ Colchamiro: Both. I approach each book with a sense of fun, wonder, and adventure, with my hope that readers will come away feeling like they were taken on a wild, unforgettable ride. But underneath the surface of the pulpy SciFi tale I embed elements that are important to me and shape my own worldview—philosophy, history, mysticism, mythology, meditation, and transcendentalism. These elements are prevalent in my novels. But nothing too preachy. I want the readers to have a blast!

Q: How did you create credibility for readers as they explored parallel universes, time travel, and an altered Earth?

Russ Colchamiro: As long as you explain the ‘rules’ of each of these worlds, and stay consistent within them, the credibility is there. I try to include enough details and world building so that readers can say, “ah, okay, I get where I am and how this all works. I’m good.” If that happens, the narrative and characters are free to go wherever the story takes them.

Q: Does the concept of “hero versus villain” apply to CROSSLINE? What makes a compelling villain?

Russ Colchamiro: My novels tend to be far less about ‘hero versus villain’ and more about the hero’s journey. In CROSSLINE, our ‘hero’ Marcus Powell is testing experimental warp thrusters, when (for reasons I won’t spoil here) he’s forced through a wormhole and into a parallel Earth, drawn into a battle he may actually have been destined for all along. He desperately wants to get back to his wife and young daughter, but the needs of the characters he meets on the ‘other Earth’ overtly conflict with his desire to get home.

Meanwhile, on our Earth, 90-year-old Harlan “Buddy” Rheams Jr.—the CEO of the private space corporation that launched Powell’s flight—may or may not have Powell’s best interests in mind.

There are some villainous characters in CROSSLINE for sure, and others more heroic, but I’m far more interested in characters that come to question their motivations, navigate the often confusing and ambiguous choices they face, then have to make decisions, and live with the consequences.

Q: How do you use your settings or worlds to propel the story?  Do they help to evolve your characters?

Russ Colchamiro: Both instinctively and by design I write each story like a mystery. Reveal, conceal, reveal again. Investigate, falter, discover, investigate again. The worlds in some cases are additional characters, with the journey to and from those worlds essential to the narrative.

The characters often find themselves unexpectedly thrust into new environments, having to discover and navigate them. Then—on their ‘heroes journey’ so richly described by Joseph Campbell in “The Hero with a Thousand Faces”—by hook or by crook figure out how, when, and why they really need or want to get back home, and if that’s even possible. And even if they do make it back, it’s unlikely they’ll be the same as when they left. That’s certainly the case with CROSSLINE.

Powell’s emersion in the ‘other Earth’ tests him in ways he never even considered. Most of the other characters also get their own arcs. Among others, Powell gets involved with a trigger happy rebel leader who reminds him of his wife, a pot-smoking shaman, a crafty pie-maker, and a weary solider who hates his guts. Some pass those tests. Some fail. Some do both.

Q: What’s next? Will we see more science fiction novels from you?

Russ Colchamiro: Yes! In July I’ll be launching LOVE, MURDER & MAYEHM, a science fiction-themed anthology from Crazy 8 Press, with 15 authors in total. I serve as the editor, and am contributing a story of my own. Each story contains at least one element of love or romance, at least one murder, and lots of mayhem, all in various, unrelated settings.

We have superhero and supervillain stories. We have artificial intelligence, off-world, and space cruiser stories. We also have dream surrogates, private eyes, an aliens vs. monsters showdown, and one DuckBob!

Some tales are wacky, some darker, and others pure fun. Mine is a private eye tale, with the PI—Angelica Hardwicke—written in that classic Sam Spade style, pinstripe suit, fedora, and all. I’m diving pretty deep into the mystery arena these days as both a reader and an author, so this collection was loads of fun to pull together.

Q: Tell us about Russ Colchamiro. What do you like to do when you’re not writing?

Russ Colchamiro: Ha. I’m a New York City transplant now living in northern New Jersey, married with twins—my ninjas, a boy and a girl, nearly seven. So between my family, my crazy dog Simon, my books, and my full-time day job as a real estate media specialist in NYC, it doesn’t leave room for much else! But I’m a lifelong baseball junkie, and gobble up fiction in whatever form I can, whenever I can. I’m actually watching The Flash on Netflix with my kids. They absolutely love it. Oh, yeah. Occasionally I sleep!

Russ Colchamiro is the author of the rollicking space adventure, CROSSLINE, the hilarious sci-fi backpacking comedy series, FINDERS KEEPERS, GENIUS DE MILO, and ASTROPALOOZA, and is editor of the new anthology, Love, Murder & Mayhem, all with Crazy 8 Press.

Russ lives in New Jersey with his wife, two children, and crazy dog, Simon, who may in fact be an alien himself. Russ has also contributed to several other anthologies, including Tales of the Crimson Keep, Pangaea, and Altered States of the Union, and TV Gods 2. He is now at work on a top-secret project, and a Finders Keepers spin-off.

As a matter of full disclosure, readers should not be surprised if Russ spontaneously teleports in a blast of white light followed by screaming fluorescent color and the feeling of being sucked through a tornado. It’s just how he gets around — windier than the bus, for sure, but much quicker. 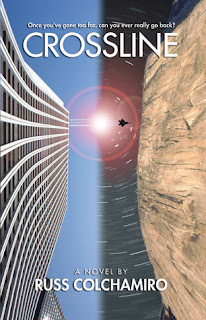 In the spirit of Firefly, Flash Gordon, Stargate, and Escape from New York...

Hotdog pilot Marcus Powell has been selected to test Taurus Enterprises' Crossline prototype craft and its newly developed warp thrusters, which, if successful, will revolutionize space travel as we know it.

But during his jaunt across the stars, Powell is forced into a parallel universe -- including a parallel Earth -- where he finds himself at the center of an epic battle he may have been destined for all along.

Meanwhile, back home, reclusive oil tycoon and Taurus CEO Buddy Rheams Jr. -- who sent Powell on that very mission -- has a mysterious past and a secret agenda, one that could prevent Powell from ever making it back to his wife and little girl.

From author Russ Colchamiro, CROSSLINE is a psychedelic, action-packed romp across time, space, and dimension that asks the question: once you cross the line, can you ever really go back?

Other Books by Russ Colchamiro

Posted by Joyce Strand at 5:33 PM No comments: