Fantasy author Jennifer Kibble categorizes her new book, PHOENIX ELEMENT: NORMALITY TWISTED, as “a fantasy adventure series with a somewhat comic book feel to it." Reviewers say “You can't stuff this book into one category,” and that it is “Fast paced with believable and up to date dialogue.” Kibble penned her book mostly for young adults but both she and reviewers claim adults will enjoy it as well.

Kibble is already writing the second book in the PHOENIX ELEMENT series. She believes that a series enables an author to expand character development and also she loves 'cliffhangers.' When she isn’t writing or reading, she likes playing video games, which she gives credit for stirring creativity for her stories.

Q: Reviewers claim that PHOENIX ELEMENT: NORMALITY TWISTED spans multiple genres including “Action/Adventure, Sci-Fi, Fantasy, and comic book action.”  How would you categorize it? Is it mostly for young adults?

Jennifer Kibble:  I see PHOENIX ELEMENT: NORMALITY TWISTED as a fantasy adventure series with a somewhat comic book feel to it. Even though it does take place on different planets, the feel is more fantasy. The series is geared toward young adults, fifth graders on up but I feel it is also a series that adults can get into as well. It is always nice to tap into our younger selves.

Q: Given that your book is fantasy, how do you make your story credible? How important is believability to your readers?

Jennifer Kibble:  I was always told to “write what you know” while I was in school. I take what I know and learned throughout my life and then expand on that. I try to embellish what I know and pull on my imagination as much as I can until I hit that wall that has a note on it telling me that if I can’t believe it then chances are, my readers won’t. The main things that I focus on are the characters. If the characters do not feel real, if their emotions are not believable then everything falls apart. Yes, magic isn’t real but if the character is believable that says something about those elements, items, species that are not.

Q: One of your reviewers praises your protagonist as a female who “feels real?” Why do readers care about your characters? Do you think readers prefer male to female protagonists?

Jennifer Kibble:  The majority of heroes in comics, video games, movies and books are mostly male. This isn’t anything new. Some of those in the media even argue that a lead male protagonist sells better than a female lead. However if a character, be it male, female, or otherwise creates a connection with the reader and feels real, then the readers feel more at ease and it won’t matter the sex of the main protagonist. I believe it isn’t the sex of the character but their actions, thoughts, their core that matter most.

Q: Do you write to entertain? Or to educate? Or to deliver a message?

Jennifer Kibble:  Before I wanted to get my book series out to the masses, I wrote for myself. It got me to write and took some of that pressure and stress away. When I decided to write to become a published author, I knew I had to write for my readers and that I want to entertain them. If a message is learned from what I write I would be happy and honored but that is not why I write. I just want to share a story and be grateful to those who go along for the ride.

Q: What is the significance of the title PHOENIX ELEMENT: NORMALITY TWISTED?

Jennifer Kibble:  I can’t dive into what the significance of PHOENIX ELEMENT is but once I find out what or who it is, my readers will know as well. NORMALITY TWISTED was originally the title of the first chapter back when I named each chapter. I got rid of that all together and used the title of the first chapter as the title for the first book in the series. It represents what the main character, JB, goes through as she becomes Anya, and her life and what she knows is drastically changed.

Q: Why did you decide to write a series rather than a standalone book?

Jennifer Kibble:  This is more of a subconscious decision. Growing up I read a lot of book series as opposed to standalone books. Writing a series, in my opinion, allows for more of the story and characters to expand. And it is always fun to end on a cliffhanger.

Q: What are the characteristics of a villain? A hero? Are they relevant to PHOENIX ELEMENT? Do you need a villain to have a hero?

Jennifer Kibble: “Every fairytale needs a good old-fashioned villain. You need me, or you’re nothing” as said by the character Moriarty in the TV series, Sherlock. No matter how you say it, every hero needs a villain. The villain doesn’t have to be a living being. A villain can be within oneself, an obstacle or a challenge that the hero must deal with and every story has one in some form or another. A hero and villain can be defined by their morals and actions. A hero can perform a villainous act and the same goes for the villain performing a heroic deed. The hero and villain scale is a tricky one and one minor slip can mean a shift in their alignment. Heroes-and-villains is a relevant concept throughout the entire series of PHOENIX ELEMENT and at times it will not be so black and white.

Q: Do your characters push you around and make you write what they want? Or are you in control?

Jennifer Kibble:  I would be lying if I said I was in control. I’ve yelled at my computer at times because my characters wanted to go left when I told them right and I love that. For me, it allows me to write the characters as they want to be written and not the other way around.

Jennifer Kibble: I am currently working on the second book of the PHOENIX ELEMENT series, MAGES OF VANE. I'm about 67% done with it. I'm happy with it so far, and I can't wait to share it with my readers. Eric White, who worked on the cover for NORMALITY TWISTED has been working on the cover for the second book (see sketch to right.)
Q:  Tell us about Jennifer Kibble. What do you like to do when you’re not reading or writing?

Jennifer Kibble:  I try to read when I can, which is sadly, less than what I used to. Currently I am deep into DRAGONLANCE CHRONICLES and LEGENDS, which is a fantasy series by Margaret Weis and Tracy Hickman. When I’m not reading or writing I like to relax by playing video games, something that I’ve been doing since I was roughly six years old. Playing since a young age has helped with my imagination and in turn given me the ideas to write.

Jennifer Kibble was born and raised in a South Florida trailer park rife with drugs and gangs. Finding an escape through both video games and writing, Jen began to write stories at an early age, finding encouragement in both teachers and her love of video games.

Her writings took a larger scope after visiting a NASA Tweet-Up Event for the final shuttle launch of Discovery. While touring the Saturn V Center, Jen found inspiration and motivation to write the Phoenix Element series. The characters and story have always been there. Jen just needed that extra push to bring dream to reality. 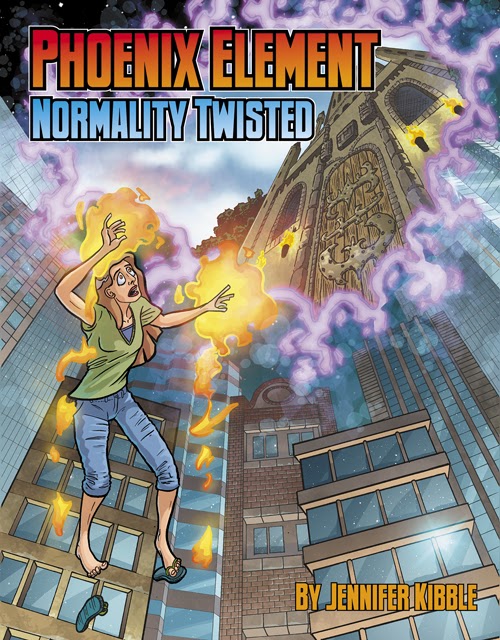 NORMALITY TWISTED takes a regular middle school student on an adventure of a lifetime and dives into her past life as well. Not only must Jennibelle tackle babysitting and her homework, but she discovers that she has magical powers as she learns who she once was—Anya, a princess from another planet. The surprises do not stop there. Anya discovers that a dark entity, a Rayasha, has attached itself to Anya's soul and is waiting for the right moment to surface. Anya is not alone as others with magic powers start to surface and friends from her past stand at her side in this young adult fantasy series.

I then hear leaves breaking under fast pacing footsteps. I duck as a broadsword swings over my head which is held by Kyle. No one has taught me how to fight with weapons before.
Kyle takes another swing at me and as I duck again, I point towards Celestria and a straight line of fire heads towards her. I then stand and I back up a few feet away from Kyle and I await his attack. Before he or I get a chance to attack each other, I am hit on my left side by in invisible force. The push is so great that I get knocked into several trees before finally coming to a stop.
Arrows shoot from above as I stand up and dodge them. I can see Kyle flying above me as I race towards Tom who is still in the clearing. The arrows follow me as I run towards Tom who is about to use sound against me for the second time. Kyle is now flying towards me from my rear and right before Tom attacks I teleport, forcing Tom to use his power against Kyle. Kyle falls down to the ground. I reappear in the trees on a branch above Celestria. I drop down and swing on the branch with my legs, upside down and facing Celestria’s back. I press my finger against her back. I didn't want to teleport but in this situation, I didn't have much of a choice. It just came to me, like instinct.
I sense someone behind me so I teleport and I shoot off a fire spell upwards as I fall towards the ground. The fire spell makes its way up towards Kyle who fires back with an electricity spell. Both spells collide and meet in the middle. I teleport again, this time with my feet on the ground, palms now pointing upwards but I notice Tom getting closer so I pull one arm away from Kyle and point it towards Tom. He uses his power to try to push my attack back towards me. Celestria then jumps down from the trees and points her arrow towards me.
“You hesitated,” she says.
“I wasn’t going to shoot you from behind,” I answer.
“The enemy will take advantage of that.”
“You’re not the enemy," I mock.
“You’re also holding back.” Kyle says from above. He pulls off his attack and files out of the way before my fire can hit him. He files down and stands next to Celestria. “Hey Tom, you can stop now.”
“Tell that to Anya,” he calls back.
“I’m not going to get hit by you again,” I call back.
“How about at the same time,” Celestria sighs.
We both pull back and I can feel my muscles as they are bruised and worn from the workout.
“Ready for round two?” Kyle asks, gripping his sword.
I arch my eyebrow, "Always."

The Art of Eric White