Mystery author Jill Edmondson knows what she likes, and her latest book FRISKY BUSINESS involves her hard-boiled detective Sasha Jackson in another Toronto-based case. Edmondson believes in building credibility through leaving loose ends and making mistakes – in addition to factual accuracy.  And a hero will always be a hero – but needs a catalyst to be so.

Edmondson loves to travel and – like, yours truly – goes to Broadway plays (oh I wish I, too, could have seen nine in the past year!). She also enjoys her two toothless Maltese dogs.

Q: How do you convince readers that Sasha Jackson is a credible hard-boiled private detective? What makes her “hard-boiled?” Why do readers care what happens to her?

Jill Edmondson: I am so happy to be able to say that readers tell me again and again that they can relate to her, that they’d like to hang out with her.  She’s fun, and likes to have a good time, but there’s more to her than that.

Like the archetypal hard-boiled PI, Sasha has an inner moral compass that guides her.  Making things right is her goal, and if a few stupid rules get broken in the process… Sasha can be counted on to do the right thing, but will probably do it the wrong way.  That’s fine though, the results are what matters, even if she does end up setting her hair on fire, or getting shot in the boobs, or totaling an expensive car…

Q: Why did you decide to write a series featuring Sasha Jackson?

Jill Edmondson: Sasha was clearly formed in my mind before I ever started writing, before I even came up with an idea for a plot!  This was a result of a few things…
·      For several years, I ran a mystery book club (and for a while I actually ran two mystery book clubs).
·      In 2005, I was a judge for the Arthur Ellis Awards (and read about 60 mysteries in about 4 months)
·      When I was doing my MA, I did a few research papers on Women in Crime Fiction.
·      I was a non-author member of Crime Writers of Canada and of Sisters in Crime.
All of those things combined to give birth to Sasha.  I knew the mystery genre really well.  I had a solid idea of what I liked and didn’t like in a mystery novel or character.  I had a good idea of what was under-represented in the genre.  And I’d learned from various discussions what fellow readers DIDN’T like or what they wished there was more of in the genre.  When I decided to try my hand at writing, I knew right away who my sleuth would be.
Q:  How relevant is Toronto as a setting for telling the story? Does it add to the mystery? Are you able to exploit its unique aspects?

Jill Edmondson:  Very, yes, and yes!  The city is almost another character, and many reviewers have commented (favorably) on the setting.  Toronto is diverse, and it really is a city of neighbourhoods.  Each area of the city, to some extent, can be characterized by culture, mood, commerce, language, income, and so on.  These locales add to the plots of each Sasha book.  The series wouldn’t be the same if it were set in, let’s say, Vancouver or Boston.

A while ago, I managed to get the Sasha books into the hands of David Mayor, the former Mayor of Toronto, and he Tweeted:

Gorgeous day to kick back with a big mug of coffee and the latest Jill Edmondson mystery - in which Toronto plays itself.
And:
- the books are terrific and Sasha suitably feisty. And I love Toronto playing itself!

That was pretty high praise!

Q: Did you write FRISKY BUSINESS solely to entertain? Or also to educate or deliver a message?

Jill Edmondson:  Entertainment must come first, but if there’s a message subtly delivered as well, then great!

Q:  Are you a believer in heroes and villains? What makes an engaging villain? Does a hero depend on the villain’s actions to become a hero?

Jill Edmondson:  A hero will always be a hero, that innate sense of morals or justice will always BE there, but it takes some kind of a catalyst, some precipitating event to SHOW the hero’s character.  Superman never leaped tall buildings in a single bound just because he was bored.

As for villains… that’s tricky.  If a writer goes too far in making a villain loathsome, then the reader may be turned off.  I think a workable villain needs to have a shred of decency, some indication of humanity… buried way deep down.

Q:  How do you make your story “credible?” Does credibility enhance the mystery and/or suspense?

Jill Edmondson: There are many things a mystery author can do to add credibility, making it factual, researching bullet wounds and blood spatter patterns, and so on.  But to me, one of the best ways to make a story credible is to have mistakes, to have loose ends.  Real life does not unfold logically or perfectly, with everything wrapped up in a nice little package.  As long as order is restored in the end, the journey to that destination can and should contain a SNAFU or two.

Q:  How important is humor in telling your story or creating your characters?

Jill Edmondson: I think a dose of humor is necessary.  I want readers to have a giggle now and then.  For me, this is easiest to do in dialogue.  Often, when I write, I’m laughing my head off.  I can get away with saying or doing things in fiction that I’d never say or do in real life.

Q:  What’s next? Will you be writing more Sasha Jackson stories?

Jill Edmondson:  Number five, Odd Lang Syne, is already underway.  It’s about Gina Gervais, a former teen idol.  Gina is at the peak of her comeback, back on the top of the charts.  Everything should be golden, but it’s not.  She’s going through a nasty divorce, she’s got a stalker, and, oh sh*t, someone’s just released a sex tape of her.  If that’s not bad enough, her estranged husband is murdered, and guess who the number one suspect is?

Q:  Tell us about Jill Edmondson. What do you like to do when you’re not writing?

Jill Edmondson:  Can I borrow your credit card before I answer that question?  I love to travel.  Put me on a plane to anywhere!  I never really plan my trips, I just bumble along when I get there.

My other favourite money vacuum, I mean pastime, is going to concerts, musicals and live theatre.  I’ve seen 9 Broadway shows in the last ~year!

Jill Edmondson is the author of the Sasha Jackson mystery series.  There’s a thin line between Jill and her sleuth Sasha, although Jill has never worked at a phone sex hotline, and Sasha isn’t a language geek. Jill enjoys bumming around any country where they speak a Latin-based language.  She also loves head-banging rock concerts, ice cream, palm trees, and absolutely adores her two toothless Maltese dogs. 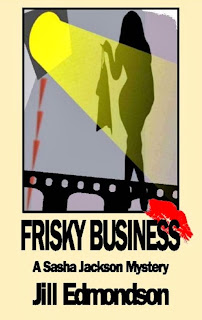 The drug addicted girl was a worthless nobody, so the cops aren't putting much effort into finding out who killed her.  Sasha takes on the case, and learns that the dirty picture business is way dirtier than it seems. She discovers surprising motives and even more surprising secrets, and just when she thinks she's solved the case, another dead body turns up.

Meanwhile, Sasha's private life is a shambles.  Her brother is pissing her off, Sasha's love-life is on the rocks, and her BFF has her nose out of joint over Sasha's latest revelations.   And then there's the driving instructor, the locksmith and the glazier.  Let's just say it's a good thing that Sasha has a credit card.

Why can't everyone just chill out long enough for Sasha to get in a good jam session, or have a good night's sleep?

Oh, for crying out loud, pass the Scotch...

About BLOOD AND GROOM – the first Sasha Jackson Mystery 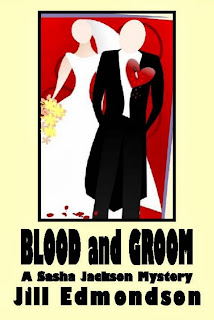 When not talking dirty at her part-time phone sex job, fledgling gumshoe Sasha Jackson is spending her days learning how “till death do us part” applies to her jilted client.

Then another former fiancé is killed and it appears Cupid’s bow is no match for the Grim Reaper’s scythe.  As Sasha continues her investigation, she uncovers a pattern of guys who skipped “I do” and now never will.

For more info on Jill, check out her: