Welcome back to Cate Beauman and her newest Bodyguards of LA County book, DECEIVING BELLA. The Bodyguard romantic suspense novels feature a new heroine and bodyguard in each standalone book and also some repeat characters.  DECEIVING BELLA, the eleventh of the Bodyguard books, involves a heroine who is a top skincare specialist, a long-lost father, and a “hottie” next door neighbor, formerly an NYPD detective.

Beauman uses music to inspire her writing and develops a playlist for each of her stories. You can see the list for DECEIVING BELLA following the interview. She is already working on the twelfth Bodyguard book and enjoys time in between writing at her home in North Carolina with her husband, two boys, and their St. Bernards, Bear and Jack.

Don't miss the opportunity to enter the Amazon Echo giveaway at the end of the interview; and check out the excerpt and song list.

Q: Can you remind us how you got started writing the Bodyguard series? What prompted you to create a series that gives you the flexibility to create new main characters but offers familiar structure with the bodyguard concept?

Cate Beauman: When I started my writing career I had no idea that my first book would be the beginning of a series. I began Morgan’s Hunter with the goal of telling a standalone story about a no-bull bodyguard and his feisty principal. I introduced Ethan and Sarah to the storyline and knew I had to share their adventure too. It wasn’t long after that the Bodyguards Of L.A. County was born.

I love that my readers get to check-in with previous characters all while meeting new heroes and heroines. It’s fun to come back to Los Angeles or wherever Ethan Cooke Security and his team of Close Protection Agents are going to take us. Although it’s a given that each novel will include a bodyguard, every storyline is entirely different.

Q: I am always curious how you select the careers for your heroines. In DECEIVING BELLA you chose ‘top skincare specialist’ for Isabella. Does her career help to engage readers? Or, define her character? Or tell the story?

Cate Beauman: I truly love Isabella Colby. She was such a fun character to write. She and Reed McKinley make an amazing team. Bella’s career is perfect for her. She’s a bit of a girly-girl. She’s into fashion and always looks amazing. Basically, she’s the exact opposite of her hottie next-door neighbor, Reed. Luckily, their differences seem to work for them. I can’t wait for everyone to meet this couple. They’re great!

Q: Do you find that humor helps to create characters and/or romance?

Cate Beauman: I can’t imagine telling a story without humor involved. What’s more engaging than characters that are having fun/making each other laugh/making the reader laugh? Everyday life can be pretty depressing. My goal is to create great adventures that take readers away from their troubles and drop them into a different world. If they’re bored, I haven’t done my job.

Q: Did setting DECEIVING BELLA in Los Angeles help to support the suspense and/or romance? It’s a great town for a mystery!

Cate Beauman: DECEIVING BELLA actually takes place in Los Angeles and New York City. It’s the best of both worlds. In this case, the setting helps support both the romance and suspense. Reed and Bella live in the Palisades. They often walk the beach together and eat ice cream. Their relationship mostly starts after a walk along the water. Reed is from the Big Apple. Unfortunately, trouble follows him to his new home in Los Angeles.

Q: Have you included any of your life experiences, even friends, in the plot?

Cate Beauman: Writers are constant observers. I’m always watching the way people interact or respond in everyday life situations. I never set out to base my characters on anyone I know personally. I want my heroes and heroines to be unique individuals who grow as the story unfolds. I think it’s vital to make my characters as real as possible with their faults and virtues just like any other typical human being. That’s what makes characters so beloved. They must come alive in a reader’s mind.

I think a writer’s personal experiences find their way into the pages of the book whether we want them to or not. After all, the story world is a reflection of how an author sees the world. The building blocks of any story start with the writer’s perceptions.

International bestselling author Cate Beauman is known for her full-length, action-packed romantic suspense series, The Bodyguards of L.A. County. Her novels have been nominated for the National Excellence in Romance Fiction Award, National Indie Excellence Award, Golden Quill Award, Writers Touch Award, and have been named Readers Favorite Five Star books. In 2015, JUSTICE FOR ABBY was selected as the Readers' Favorite International Book Award Gold Medalist, while SAVING SOPHIE took the Silver Medal. SAVING SOPHIE was also selected as the 2015 Readers Crown Award winner for Romantic Suspense and FALLING FOR SARAH received the silver medal for the 2014 Readers' Favorite Awards.

Cate makes her home in North Carolina with her husband, two boys, and their St. Bernards, Bear and Jack. Currently Cate is working on her twelfth full length romantic suspense novel. 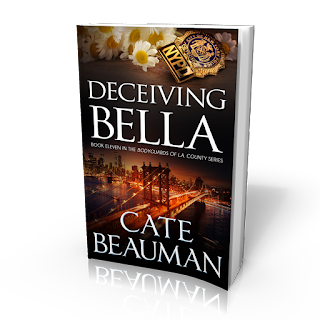 Isabella Colby has always yearned for normalcy. Now that she’s settled in LA, she finally has it. Good friends, a pretty home, and her thriving career as the Palisades’ top skincare specialist are a dream come true. Bella is content until she meets her hunky new neighbor, but her attraction to the blue-eyed cutie is the least of her worries when contacting her long-lost father threatens to destroy her happy life.

Reed McKinley is more than ready to forget the past. His seven-year stint as an NYPD detective nearly got him killed. His wounds have healed and he’s starting over as Ethan Cooke Security’s latest recruit. With sixty-hour workweeks and little time to himself, the last thing on his mind is a relationship. Then he bumps into the gorgeous woman next door.

Reed and Bella become fast friends. Before long, Reed discovers that Bella is keeping dangerous secrets. Bella may have the answers to decades-old questions he’s been searching for. Reed will risk it all to uncover the truth, but he soon realizes that the deeper he digs, the direr the consequences.

Should we get started?” Bella gestured to the kitchen.
“After you.”
She walked in front of Reed, hurrying to the table to pull out a chair. “Does this work?”
“Yeah, it’s fine.” He sat down.
She immediately draped him with the black cover, wanting to get to his hair while it was still wet. “So, what are we doing here, exactly?”
“Just a cleanup, especially on my neck.”
“Sure.” She grabbed the sheers and took her place by his side, sliding her fingers though his short hair and stopped. “Oops.”
His shoulders tensed. “What?”
“Just kidding. A little haircutting humor.”
He tilted his head up, meeting her eyes. “A comedian.”
She laughed as he smiled. “I haven’t even started cutting yet.” She gave him a bump. “Try to relax. I promise you’re in good hands.”
“Chop away.”
“Thanks.” She combed her fingers through his hair once more, using small snips to freshen up his look. Silent seconds ticked by as she breathed in the masculine scent that was Reed. He didn’t seem to wear cologne or use any fancy shampoos, but he smelled good just the same. “So, how was your day?”
“Not too shabby.”
She worked her way around his head, finding his cut a breeze to clean up. He easily could have gone another week without any problems. “What did you do?”
“Worked a little. Boxed.”
“Fascinating.”
“I could make up something about stopping a bank robbery in progress or rescuing a cat from a tree.”
She smiled. “The truth is fine, thanks.”
“What about you?”
“It was pretty much a normal day at the office—a second-session tattoo removal, a microdermabrasion, two stretch mark reductions, the usual stuff.”
“What’s the tattoo of? The one you’re taking off?”
“A woman’s name. Genevieve. The relationship didn’t work out.”
He winced. “Ouch.”
“Triple ouch. Tattoo removal is not a pain-free procedure, nor is it cheap—and he went pretty ornate with Genevieve. Hopefully next time he’ll pick a woman with a shorter name or abstain from getting himself tatted up altogether.”
He laughed.
She grinned, loving that sound. Did he have any idea how gorgeous he was when he smiled like that? She picked up the clippers off the table and let her knees rest against his as she leaned in and gently lifted his chin, evening out his sideburns. She swallowed, feeling his breath on her skin and his eyes studying her face. Licking her lips, she met his gaze. “You better hope I get this part right, or you’ll have to tilt your head for the next four days.”
He sent her another one of his pulse-pounding smiles. “You’ll have to help me decide if I should lean more to the left or right.”
Oh, this cutie had the potential to be trouble. Her eyes darted to his mouth mere inches from hers as his five o’clock shadow tormented her sensitized fingers. She took a step back and a steadying breath. It was a good thing they were just friends—currently the only relationship status she was interested in.

I love music! I can’t imagine a world without catchy tunes playing, especially when I’m writing. Music is inspiration. Melodies, beats, and the mood of each song help me portray emotions and feelings as I tell a story. It’s a rare day when I don’t have my headphones in place, bopping my head, while my fingers race across the keyboard. You can listen to the “soundtrack” for each book on my website

TO ENTER THE GIVEAWAY OF AN AMAZON ECHO, go to:
http://bit.ly/2dyM91F