WHAT THE EXPERTS SAY: Stephen Jared, Author and Actor

Stephen Jared’s newest novel, NEED MORE ROAD, offers what Jared describes as his own “temperament” on a “classic subject”—a bank heist turned into romance. He uses the setting of the 1950s in Barstow, Calif. to support his plot and develop his characters. Reviewers applaud his “insight into human nature” and add that his books are “dramatic, adventuresome, and infused with real emotion.”

In addition to writing novels that include adventure stories set in the 1930s and 1940s, Jared is also an actor and has appeared in movies such as He's Just Not That Into You, and on television series such as iCarly and Criminal Minds. He is currently Associate Producer of a documentary on the illustrator Richard Amsel. And he is busy writing his next adventure story and plans to release it the end of the year.

Q: Would you characterize your newest book, NEED MORE ROAD, as a romance or suspense novel? What drew you to write this story?

Stephen Jared: A million bank heist stories have been told. So, once I had the idea, I began thinking of it like how a painter might approach a still life or landscape. There’s only one reason to paint such a thing, and that’s to express one’s own temperament through a classic subject. As such, it evolved into an eccentric romance. It starts with suspense surrounding a crime but, for me, it’s more interesting to see where the characters go from there. Without a doubt, there’s some genre-bending going on. I saw that as a good thing but some readers have been thrown by it.

Q: I know you’ve written many novels set in the first half of the 20th century. What draws you to this time period? Would NEED MORE ROAD have been a different story if set in present-day rather than in the 1950s?

Stephen Jared: Some writers capture their own era so beautifully. Fitzgerald and Hemingway leap to mind. I’m not that smart. I’m confused by our modern world. I can’t get enough of a handle on it to write about it. When I look back to an earlier era, however, objectivity and generalizations become easier. As example, NEED MORE ROAD is set in the 1950s, and I gave a lot of thought to why the 1950s was a car culture. Obviously, people had more money after the war, but that doesn’t answer why people would drive to a restaurant and have dinner brought to them in their cars. People were cruising and drag racing. Teenagers were getting cars and parking while on dates. People were going to Drive-Ins and watching films in their cars. I wondered if there was a lot of anxiety and restless energy after the war, and maybe cars helped alleviate some of that. You could put things behind you faster behind the wheel of a car. Some of these ideas found their way into NEED MORE ROAD. The distance from iconic elements of an era maybe gives my mind some room to think.

Q: A reviewer says of your protagonist, Eddie, that you’ve created “a poignant character study of a lonely man living in quiet desperation.” Is NEED MORE ROAD more about your characters, particularly Eddie, than about the plot?

Stephen Jared: I think the book’s success or failure pivots on the degree to which readers find Eddie engaging. What appealed to me was this guy who has always lived vicariously through fictional characters, now he’s almost fifty, meets someone, and feels he’s plunged into a different world, and it’s a world he wants to stay in. In order to continue, he takes a massive risk. Reality proves hard, fraught with dangers. Reality lands every punch and it’s brutal. But only in reality can Eddie lose the loneliness that’s plagued him his whole life. The plot ended up driven very much by what I wanted to express through the character.

Q: Do you consider Eddie a hero? Why or why not?

Stephen Jared: He’s dysfunctional. He’s cowardly. He’s an unhappy guy. Constantly questioning everything. When he pulls his head out of the cinema long enough to see himself as he really is he goes so far as to involve himself in a crime with hopes of becoming someone new. Of course, people can’t change overnight, but in going down a different road he finds strength he didn’t have before. He gains some satisfaction. He actually begins living a life not so different from the fictional characters he used to envy on the silver screen. It’s hard to change your life, to leave everything you know behind. Eddie does a heroic thing. But, no, he’s not a hero at all.

Q: Why did you set NEED MORE ROAD in Barstow, Calif.? Does this location support your plot or help develop characters?

Stephen Jared: 1950s Barstow was small. It was a place people passed through without paying much attention to it. It lacked glamor. It lacked significance, and it was surrounded by nothing but desert. I felt it offered a reflection of Eddie Howard, the main character.

Q: Reviewers hint that NEED MORE ROAD is different from your other books, which are more hard-boiled pulp fiction.  Do you agree?  (Please do not divulge the end of your story to respond to this question.)

Stephen Jared: I see it as an extension of what I was doing with the last one, THE BRUTAL ILLUSION, which was something more introspective. I love hard-hitting noirs and adventures, but if you remain really true to the form the stories risk becoming nothing more than homage. I think you have to offer something different. I think uniqueness is found in self-expression; you just have to be careful about becoming overly self-indulgent.

Q: How helpful is humor at developing your characters or plot?

Stephen Jared: Humor is a plus. I think especially so if you’re working with a melancholic character like Eddie. You have to lighten things up here and there.

Q: As an actor, can you apply aspects of script-writing to writing a novel, e.g., scene development, dialogue-based, showing rather than telling?

Stephen Jared: Both require some similar skills. I don’t think one is easier than the other but the function of each demands a very different discipline. A script is more like an architect’s blueprint for a house. The readers of a script are fellow craftsmen. A novel isn’t assigned dozens of interpretive artists to jump on board and move it through a long process before it hits the marketplace. It begins and ends with the written word.

Stephen Jared: I’m currently at work on another Jack Hunter adventure. I hope to get it out in the Fall.

Q: What have you been doing recently in addition to writing?

Stephen Jared:  I’m Associate Producer of a documentary on the illustrator Richard Amsel. It’s a film by Adam McDaniel, and there’s probably no one better suited to be making a film about Amsel. It’s been great to be supporting him however I can. I’m also still acting. I recently did an episode of The Young and The Restless, which aired a couple of weeks ago.

Stephen Jared grew up in a small Ohio town in the late 1970s/early 1980s. He was at the cinema every weekend. When considering what he might do as an adult he only had one idea: he wanted to work in movies. In the summer of 1989 he moved to Los Angeles. He was twenty-one years old. Since then, he’s appeared as an actor in movies such as He's Just Not That Into You, and on television series such as iCarly and Criminal Minds.

In 2010, he wrote JACK AND THE JUNGLE LION, a novel inspired by 1930s Hollywood. Having received much critical praise, Solstice Publishing began releasing his work, starting with TEN-A-WEEK STEALE, hailed as a “fantastic work in the tradition of the old pulp/noir masters.”  THE ELEPHANTS OF SHANGHAI continued on from where JACK AND THE JUNGLE LION left off, and went on to take Second Place at the 2013 Hollywood Book Festival. 2014 saw the release of THE BRUTAL ILLUSION, considered by many to be his best work.

While remaining busy as both author and actor, Stephen is also Associate Producer of an upcoming documentary about movie poster legend Richard Amsel who created classic illustrations for Flash Gordon and Raiders of the Lost Ark, among others, in the late 1970s/early 1980s. 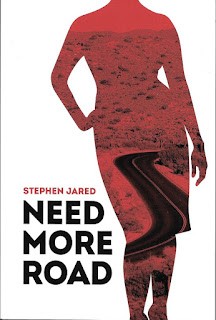 Eddie lives a life of uncommon routine. At nearly fifty-years-old, he’s only ever lived in one house. Bored with his bank job, he spends evenings at the movies where he lives vicariously through Rock Hudson and Robert Mitchum. With one screen in town he often sees the same picture repeatedly. He finds Hollywood fantasies infinitely more enticing than reality. Late one Friday, a woman walks into the bank. Her name is Mary Rose, and she looks like Marilyn Monroe. Her father came into money and the two are looking to settle in a small town. Infatuated, Eddie breaks from routines and spends time with her. While she couldn't be sweeter, her father is different. He has a roughness about him, an edge. This becomes especially clear when he requests Eddie's help with a bank heist. Mary Rose’s interest in Eddie was only to lure him into helping her father. Eddie understands this now. Walking away is the obvious move. He knows it’s the right thing to do. Yet her attention and affection and beauty have made him feel alive for the first time. All he has to do is unlock a door. 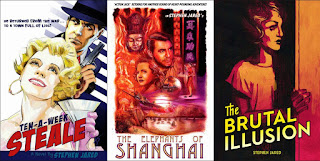 
Posted by Joyce Strand at 6:28 PM No comments: