WHAT THE EXPERTS SAY: Mark A. Flagel, Author

Mark A. Flagel brings us a story he has wanted to write ever since hearing about the East German secret doping of its female athletes in the 1976 Olympics. His story is fiction, much of which occurs twenty years following the Olympic event, but based on historical facts, which one reviewer says is “a story that absolutely needed to be told.” Another reviewer says that PRICE OF GOLD: TWO WOMEN, TWO CHAMPIONS, TWO WORLDS is a “riveting novel that tells the story of two women swimmers, one American the other East German, who competed in the 1976 Montreal Olympics.”

Flagel is a retired lawyer who now gets to do what he’s always want to do: write novels. He is currently working on three other projects and hopes one of them will inspire him the way PRICE OF GOLD did. He likes to walk, think, and play poker, spend time with his grown children who are scattered throughout the U.S., and travel. He is particularly drawn to unusual acts of kindness.

Q: How did you become interested in Olympic swimmers, specifically the background for the women in PRICE OF GOLD: TWO WOMEN, TWO CHAMPIONS, TWO WORLDS? Are you a swimmer? What drove you to tell this story?

Mark A. Flagel: I first heard about the underlying historical facts, and in particular the secret East German doping of its own athletes and its impact on the 1976 Olympics, back in or about the year 2000. I thought it was a fascinating story, and was astonished that I’d not heard anything about it before. During the ensuing years I often told the story to friends, and each person I told invariably responded the way I first responded: What a fascinating story.  Why haven’t I heard anything about this? When I was planning my March 2014 transition from lawyer to writer, it struck me that, since the actual underlying historical events hadn’t gained widespread attention, perhaps I could find a way through fiction to make the story resonate and get the attention I think it deserves.

Q:  Did your career as a lawyer help you tell your story?

Mark A. Flagel: I think it helped, in at least two ways. First, the research skills I learned as a lawyer came in very handy, as I wanted to capture the essence of real, and quite chilling, saddening, and emotional, historical events. Second, my trial experience helped me dramatize the climactic courtroom scene involving the fictional cross examination of a former secret East German STASI agent, who had doubled as a trainer for the East German swimmers and had been an “enforcer” of the secret doping program. (To see what really made the cross-examination so dramatic, your readers are going to have to read the book!)

Q: What makes readers care about your characters, specifically the East German swimmer?

Mark A. Flagel: As Americans, we are naturally, and understandably, upset when cheating athletes essentially steal everything our honest athletes worked for their entire careers and lives. That’s what makes us care so much about Ivy, the American heroine of PRICE OF GOLD. The twist here is that the East German government set out to use its own young girls as guinea pigs, secretly giving them lethal steroids beginning at age eleven, hoping they would create super-athletes to help East Germany enhance its influence in the Soviet sphere, but knowing that, in the long term, they would create a generation of cripples who would also, in turn, likely give birth to handicapped children. Both things happened, and in a very real sense Hannah is as much a victim of this travesty as Ivy, and in some ways even more so, which is what makes us care so much about Hannah.

Q: How relevant is credibility/believability to telling your story? What kind of research did you conduct to assure accuracy for credibility? How accurate is the historical and political background?

Mark A. Flagel: Credibility is extremely important, and the historical foundation on which the book is built was crafted only after hundreds of hours of thorough and necessary research. Indeed, my research only deepened my resolve to create a historical fiction version of this story. There are at least three well-researched, non-fiction, academic books, along with an enlightening PBS special, that reveal the essence of the secret East German doping machine, its extent, its impact, and its fallout. Despite all these materials, relatively few people know about this important, and tragic, chapter in Olympic and doping history. I hope to change that, at least a little, and accuracy regarding the underlying historical and political background is and was an important part of that effort.

Q: Does the concept of heroes vs villains apply to your story? If so, what are the characteristics of an effective villain? Do you need a villain to have a hero?

Mark A. Flagel: This story raises a question that each reader will grapple with and resolve in her or his own way: who are the real heroes, and who are the real villains? Sometimes in this book, as in life, the answers are not that clear. That’s part of what I think has driven the so far very positive reviews of the book.

Q: Did you write PRICE OF GOLD only to entertain, or did you also embed some key messages? What did you want your readers to take away from your story?

Mark A. Flagel: Through PRICE OF GOLD, I wanted to bring attention to the heroic women who actually lived the tragic chapter of Olympic history created by the secret East German doping machine, honor the women cheated out of medals they had sacrificed everything for, yet recognize the very real and painful sacrifices made and suffering endured by the “other” victims of this politically inspired doping fiasco.

Q: How helpful was the setting of Montreal to adding suspense or drama to your story?

Mark A. Flagel: Montreal, of course, provides the flash-point for the East German, doping-driven gold medals that did and will forever fan the flame of this controversy. That said, the background of the story and the fallout from Montreal take place throughout the United States and Germany.

Q:  Did you use humor to develop your characters or tell your story? How important is it?

Mark A. Flagel: Laughing is always comforting, it seems, and I think it was important for me, in PRICE OF GOLD, to use some humor to humanize the characters. But the strength of PRICE OF GOLD is its dramatic and emotional impact, not its humor.

Mark A. Flagel: Good question! I’m not sure! I’m working on three different projects, and hoping that one of them will inspire me the way writing PRICE OF GOLD inspired me. If you look at my website, you’ll see a synopsis of one of my projects, called Peach Moments, which I use to refer to those moments of euphoria that all of us, regardless of who we are, where we come from, or how much money we have (or don’t have), are capable of achieving, in a variety of contexts. Stay tuned on that front.

Q: Tell us about Mark Flagel. What do you like to do when you’re not writing?

Mark A. Flagel:  I like to walk and think. I like to play poker. I like to spend time with family which, in the case of my children, is not all that easy as my daughter lives in Pennsylvania, my oldest son is an Army Special Forces trainee currently stationed at Fort Bragg in North Carolina, and my youngest son is going to be a sophomore at USC. I like to hear about acts of kindness, above and beyond the ordinary. I get a lot of satisfaction from four non-profit organizations I’m involved in, the LA Regional Foodbank, College Track, College Match, and the Exceptional Children’s Foundation. And of course, I like to travel.

About Mark A. Flagel

Mark A. Flagel was born in Los Angeles, California in 1958. He graduated from Long Beach Wilson High School in 1976, UCLA in 1980, and UC Berkeley Law School in 1983. He practiced law for 31 years, then retired in 2014 to pursue his lifelong passion – writing. He hopes PRICE OF GOLD helps bring attention and, perhaps, even some form of relief and vindication to the heroic women who actually lived through the historical events that inspired the novel.

About PRICE OF GOLD 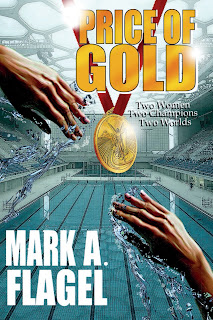 Ivy Johnson had never been more ready. The Montreal Summer Olympic Games. July, 1976. The United States just celebrated its 200th anniversary and Ivy, just shy of her 19th birthday, would deliver gold to her country and confirm her place among the greatest swimmers of all time. Hannah Eberhardt had different ideas. The 16-year-old East German, propelled by a secret guilt and a clandestine truth, crushed Ivy’s dreams and took gold back across the Atlantic, to the Fatherland. Ivy knew at the time, but couldn’t prove, she was cheated. Disturbing secrets emerging twenty years later, after the fall of East Germany, gave her another chance. Ivy headed to Germany to peel back the onion, confront her nemesis, and re-claim her glory, but as each layer came off, new, horrifying, and surprising truths emerged.
PRICE OF GOLD is a work of fiction. But it is built on historical truth; painful historical truth; truth that illustrates the often gut wrenching price of gold, and the efforts of the heroic women involved in this tragic chapter of Olympic history.