A reviewer of Lynne Constantine’s soon-to-be-released thriller, THE VERITAS DECEPTION, says it is "A delicious blend of desperation and intrigue." Constantine says it’s a thriller because it’s “high stakes” and “The pace is fast and the action never stops.”

Constantine likes writing thrillers, and plans for THE VERITAS DECEPTION to be the first of many with these protagonists. She and her sister are getting ready to publish a domestic thriller. She is a contributor to Suspense Magazine and a contributing editor to The Big Thrill magazine.

When she's not writing, she enjoys walking with her husband and golden retriever. Her two teenagers keep her up to date with the latest movies. She loves "hanging out" with her family.

Don’t miss the excerpt from THE VERITAS DECEPTION following her interview.

Q: What makes THE VERITAS DECEPTION a thriller?

Lynne Constantine: The high stakes. Jack and Taylor are running for their lives. They’re trying to find someone who’s responsible for the death of Taylor’s husband, a US senator, as well as for compromising another US senator. The pace is fast and the action never stops.

Q: Why will readers embrace your protagonists, Jack and Taylor? Do you consider them heroes or just everyday people we can all relate to?

Lynne Constantine: Jack and Taylor are ordinary people who find themselves thrust into extraordinary circumstances. They grew up next door to each other, were high school sweethearts and had everything in their lives all planned out. But things didn’t turn out like they planned. Events in both of their lives turned everything upside down and they ended up going down two completely different roads. When the book opens, they haven’t spoken to each other in over fifteen years and they find themselves on the run together—something they would have never imagined in a million years.

Q: How did your career in marketing and advertising help you write THE VERITAS DECEPTION?

Lynne Constantine: It was the realization of how susceptible we are to the images and messages inundating us everyday that became the seeds for THE VERITAS DECEPTION. As I sat in meetings with executives talking about ad campaigns and how to change the perception of the public toward our product, it made me start to wonder about other people in other meetings. From there it was easy to imagine a world where changes and trends in public opinion weren’t random, but a result of orchestrated efforts between advertising, media, and legislature.

Q: What makes your plot credible? How important is believability to tell your story?

Lynne Constantine: I did a lot of research into the historical components of the plot. The credibility of the conspiracy is helped by the fact that many of the plans of the antagonist have already come to fruition in reality. For example, when I started the book over twenty years ago and came up with ideas for outrageous television shows, one of them was about a charming serial killer. I also wrote about ads for condoms and other sexual aids. At the time, there was nothing like that on t.v. Before the book came out, Dexter had come and gone, and those types of ads were commonplace. The change has been so gradual that it’s easy to go unnoticed. It’s only if you take a snapshot of entertainment from twenty years ago and compare it to today that you see the extreme contrast.

Q: Does the concept of heroes and villains apply to THE VERITAS DECEPTION? If so, what are the characteristics of an effective and compelling villain?

Lynne Constantine: Yes. The book is all about good vs. evil and the traditional hero and villain. An effective and compelling villain is actually the hero of his or her own story. Aside from motivation for his or her actions, a complex back story makes a more interesting and believable villain.

Q:  You’ve also written short stories and co-authored a novel. Do you prefer writing novels or short stories? What can you do better in a novel?

Lynne Constantine: I much prefer novels. I become very attached to my characters and I need the long form to allow them to develop and grow. A novel has the time to explore in greater depth the character journey and metamorphosis present in a good story.

Q: Without giving anything away—no spoilers please—what does the title, THE VERITAS DECEPTION, mean?

Lynne Constantine: Veritas is Latin for truth. So it literally means the truth deception.

Q: Did you write THE VERITAS DECEPTION strictly to entertain, or did you embed a few messages along the way?

Lynne Constantine: There are themes in the book of faith, redemption, forgiveness, and grace. I tried hard not to impose my own opinions but rather to let the characters and their experiences speak for themselves.

Q: What’s next? Will you write another novel? Will you continue to write thrillers?

Lynne Constantine: Yes and yes! I love writing thrillers. I’m hoping that this is the first in a series with Jack and Taylor. Also, my sister and I have a domestic thriller coming out with a traditional publisher that we’re very excited about. That deal will be announced in September, and she and I will continue to write together as well.

Q: Tell us about Lynne Constantine. What do you like to do when you’re not writing?

Lynne Constantine: I love to read, of course. And watch too much television. I adore the beach, and weather permitting, will start the day with a walk with my husband and our golden retriever. I have two teenagers who keep me up-to-date with the latest movies and trends and I love hanging out with them. Time with family and friends is the best way for me to unwind.

About Lynne Constantine
Lynne Constantine is a coffee-drinking, Twitter-addicted fiction author always working on her next book. She likes to run her plots by Tucker, her golden retriever, who never criticizes them. Lynne is the co-author of CIRCLE DANCE, as well as several short stories. She is a monthly contributor to Suspense Magazine and a contributing editor to The Big Thrill magazine. Lynne has a master’s degree from Johns Hopkins University.  Visit Lynne at www.lynneconstantine.com

About THE VERITAS DECEPTION

There is a way that seems right to a man, but in the end it leads to death.
Proverbs 14:21 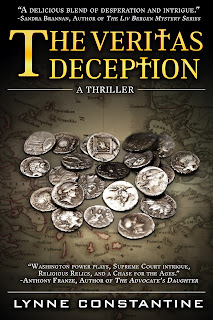 Days after US Senator Malcolm Phillips changes his vote on a bill he sponsored, he is murdered and his death disguised as an accident. He contacted one man before he died: investigative journalist, Jack Logan. He left Jack a single clue to help him uncover the truth and keep Phillips’s widow, Taylor, safe. But safe from whom?

Jack and Taylor’s desperate hunt leads them to a vast network of corrupt authority, controlling everything from social media and television programming to law enforcement and US legislation. The key to unraveling a complex web of lies is a set of ancient relics, dating back to the time of Christ. But what do these relics have to do with a senator’s death?

Allies turn to foes when Jack and Taylor discover that those closest to them are part of the conspiracy, and that they too have been manipulated. How long has a puppet master been pulling their strings—and will Jack and Taylor trust the right people long enough to win what becomes a colossal battle for souls?

Jack Logan had ditched his Catholic upbringing but kept the guilt. He hadn’t planned on blowing his entire afternoon listening to the woman he was interviewing talk about her dead daughter, but he didn’t have the heart to tell the grieving mother that he already had enough for the story. So instead, he bought her lunch and dinner, listening as she painted a picture of the girl she had loved and had failed to save. Now he was behind schedule and would have to work all night. Man, he hated the pieces involving kids. The parents got to him every time, and his attempts at comforting them were as effective as a Band-Aid on a gunshot wound.
His phone was ringing as he approached the door to his apartment, and he jammed the key in the lock. Pushing the door open, he rushed over and snatched it, upsetting the bottle of Bass Ale and spilling the dregs on the table.
“Great.” He clicked the green button. “Yes?”
“Could you sound any more annoyed?” It was his editor.
“Sorry, Max. What’s up?” He sunk into the worn leather sofa and ran a hand through his hair.
“Tried your cell. Went right to voice mail.”
“I was interviewing one of the mothers.”
The sound of papers rustling came over the phone. “You already did your piece on the decision. What’s the angle on the follow-up?”
“The fall out, the casualties left in the wake of the decision to let the show go on.”
A sharp intake of breath. “You’re not saying they should have censored it?”
“No, no. Of course not. But their voices deserve to be heard.” This had been a particularly difficult assignment for him. He wasn’t much of a television watcher, but when the class action suit involving the production company behind Teenage Wasted reached the Supreme Court, he’d tuned in. At first it looked just like another of the ubiquitous reality shows jamming the airwaves—an eclectic group of teenagers allowing the cameras behind the scenes into their world. Within the first five minutes of the show, Jack had sat open-mouthed while a young man retrieved paraphernalia from under his bed, pulled up a porn site on his computer, and began doing what your average adolescent boy did behind closed doors. Cheap shock value but not much in the way of entertainment. It wasn’t until he put the noose around his neck that Jack’s shock turned to horror. So that was what erotic asphyxiation looked like up close and personal.