Joel T. McGrath brings us SOMETHING ETERNAL, a story he has entered into Kindle Scout to win a five-year publishing contract. Currently he is focused on “building a fun, insightful audience” and hopes to attract readers to nominate SOMETHING ETERNAL on Kindle Scout.  McGrath describes SOMETHING ETERNAL as only he can (see his response to the first question), but he says it's a "fun read" that "almost anyone should enjoy."  He provides an excerpt following the interview.

A member of the New Hampshire Writers’ Project, McGrath is a four-time top 20% choice for the Amazon Breakthrough Novel Award with four different manuscripts. He is currently working with a Disney illustrator on a graphic novel.

Q: How would you characterize SOMETHING ETERNAL? In what genre[s] would you place it? Is it paranormal? Romance?

Q: Who are the most likely readers of SOMETHING ETERNAL? Is it for young adults or all ages?

Joel T. McGrath: You know, I didn’t box it into a corner. I hate saying it’s for this age group or genre. It’s a fast, fun read packed with cool, fresh stuff almost anyone should enjoy.

Q: What makes SOMETHING ETERNAL unique?

Joel T. McGrath: Probably my upbringing, I was raised to believe I would never die. Since becoming a nurse years ago, I have, firsthand, watched death and suffering on a scale I wish I had not. It makes you think about life more often than I ever had before.

Q: How do you help readers engage with your characters? Why do we care what happens to them? Have you based them on real people?

Q: Is there a “villain” in SOMETHING ETERNAL? Do you believe that you need to have conflict between a villain and a hero to have an entertaining story?

Joel T. McGrath: No. I have antagonists, there’s a difference. Conflict is a part of everyday life; it doesn’t need some great evil power or heroic figure, it just needs to be genuine. Villains and heroes are passé, but that doesn’t mean someone can’t act treacherously or bravely or even both at different times in their life.

Q: Do you write purely to entertain your readers or did you embed some messages in SOMETHING ETERNAL?

Joel T. McGrath: I’m not big on messages. I don’t think I’m smarter than other people, yet people are always trying to separate you from your own thoughts, mostly it’s people you trust. Your ability to think for yourself is the greatest gift you will ever have. That being said, yes, I want to open a world of possibilities you may have never considered when exploring SOMETHING ETERNAL.

Q: How helpful is humor to create characters and/or develop the plot?

Joel T. McGrath: It’s only helpful if it’s applicable. When in doubt, leave it out. If it’s the character’s defining quality, you had better be able to pull it off, because nothing will sink your plot or character faster than poorly timed humor. At the same time, I hate heavy-handed material, too. You’ll find dabs here and there in SOMETHING ETERNAL, kind of like salt at the dinner table. A little is good, but too much will kill you.

Q: How important is credibility in SOMETHING ETERNAL?  What makes the story believable?

Joel T. McGrath: Let’s face it, fiction is only as good as its ability to convince the audience that unbelievable things are possible. I’ve carefully constructed rules in SOMETHING ETERNAL, rules which I will not break. Certain concrete rules help lend credibility to any work of fiction.

Joel T. McGrath: That is up to the readers. As you may know, SOMETHING ETERNAL is not for sale…yet. I’m hoping to win a five-year publishing contract. Those who read and nominate the excerpt from SOMETHING ETERNAL will get a FREE copy from Amazon should it win. I have other works planned, but I’m building a fun, insightful audience right now, and I’m completely focused on them.

Q:  Tell us about Joel T. McGrath. What do you like to do when you’re not writing?

Joel T. McGrath: Sad but true, I think about writing when I’m not writing. No, but seriously, I love the theatre, music, animals, and meeting different types of people. I guess I just try to find balance with whatever I’m doing because life goes by quickly.

Thank you for sharing your time with me. I hope you will find me over on Kindle Scout starting 7/1/16, and I also hope you will nominate SOMETHING ETERNAL while you’re there. All books selected for publication will have free copies distributed to the readers who nominated them.

Joel T. McGrath is a proud member of the New Hampshire Writers’ Project. He is a four-time top 20% choice for the Amazon Breakthrough Novel Award with four different manuscripts. He has sold foreign rights to his first novel through a literary agent in Turkey. Joel is currently working with a Disney illustrator on a graphic novel and hopes to release portions of the work in summer 2017. 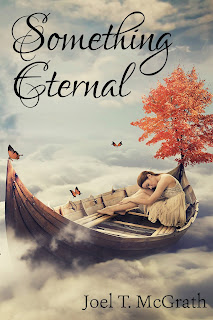 “Life without love is fire without flame.”

In our time, wonder has disappeared. Most believe in what is seen, others in what is heard, yet a few know something eternal guides them.

When Vincent steals his older brother’s girl, Noemi, someone is going to die. Three lives, once ascending to greatness, are pitched into chaos. Jak, after months of searching, finds his younger brother, Vincent, while Noemi faces certain death. On one hand, Vincent can save her, yet others will die for their love.

Vincent eyed the six-foot, jumbled pile of wood nearby. Wiping his brow, he reached over, grabbing the unevenly weighted ax handle. He placed a block of wood on a large stump, and with two mighty hands, he raised the ax over top his head. His muscles expanded, heaving with lines of defined power. Vincent chopped down with a crack upon the block of wood, splitting it clear in half, and from the rubble, tossing the divided pieces airborne in opposed directions.
At first, he had been too distracted by the loss of his vigor, his power, and source of his strength to notice Noemi’s sadness, but now he had restored a measure of balance within himself. Yet, he failed the first class of boyfriend 101, not listening, while trying to solve. Not hearing, thinking he understood, and dismissing any problem as tiny and illogical, yet with every rationale, Vincent missed the hidden, parched well of despair deep inside Noemi’s core.
And though she smiled, it killed her a little more each time he ignored, whether on purpose or by accident, the deprived, soft coal of her slow burning, resentful heart toward him.
Down in the swaying wheat fields, Noemi had plenty of time to think. Her face flushed, rosy red from the sun, she sauntered along, tending to the animals, while gathering a bouquet of aroma-filled flowers into her wicker basket. She plucked red clovers. An eruption of orange, black, and white spotted butterflies hovered circles around her. Their tiny, delicate wings fluttered up and down with gradual majesty. The butterflies slowly dispersed, their soft wings tickling her skin as they did. Yet one rested on Noemi’s index finger. She carefully brought her finger to eye level, smiling while examining its fragile wings. The butterfly soon flew off into the vast, blue sky along with the others. Her smile straightened. Her eyes dimmed. She looked at her surroundings and sighed.
Noemi knew something was wrong, she just did not understand why Vincent refused to admit it. Not only was her heart exposed, it was breaking. She felt as if her soul were eroding, that a void widened an empty space in her chest, which filtered into regret. There were mitigating factors. She was still young, and Vincent was younger than she was by two years still. Noemi had been so many things in her young life already. She was a warrior, an immortal, a force for good, a tool for evil, but she was a woman, and most of all, a teen trying to play house.
She had been engaged to Vincent’s older brother no less, but she tried to forget that tragic romance. Noemi felt treasured in Vincent’s arms, though her own desire turned hostile, with a lessening of passion in recent weeks. She missed her parents, she missed her life, and she missed the world. She was isolated from her friends. She felt drained by her relationship with Vincent, and she wondered if he knew that everything she had sacrificed was for him.


A Note from the Author: 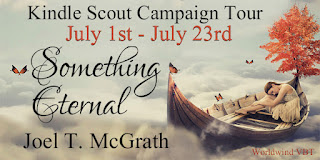