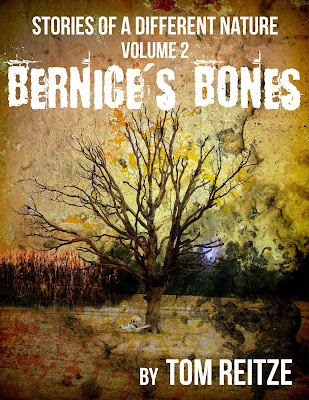 Tom Reitze continues his interview with the release of his second story, BERNICE’S BONES, in his “Stories of a Different Nature.” In a previous interview, he told us that he didn't write his first story, DATE WITH A CHAIR, "to produce joy and happiness.” BERNICE’S BONES, on the other hand, he says is “light and humorous,” and if it doesn’t make us laugh “that’ll make me cry.”

Reitze is releasing his short stories one at a time to tantalize us, and he’s stingy with his clues about what’s coming next. For more on his first story and his comments on genre, paranormal fiction, and themes of his stories, check out his first interview on this blog at http://bit.ly/1RGM8Fy

Q: What can you tell us about your second story, BERNICE’S BONES? In what genre would you place it? How does it differ from your first one, DATE WITH A CHAIR? Will it make us laugh, cry, or be terrified?

Tom Reitze: This story is part of my Waldorf salad genre. I think this one is the walnuts. Here I go off in an entirely new direction. Many writers keep to a theme. I don’t. If all the stories under the umbrella ‘Stories of a Different Nature’ were collected as a book, it might appear to be a short story collection of many different writers. I enjoy the challenge of writing in different styles.

This piece takes place in the early forties in the Dakota farmlands. Jasper, of some indeterminate but surely prehistoric age, killed his wife some time ago, but got away with it. He buried her then, but now faces an unusual dilemma: Once wasn’t enough.

This story is light, humorous, and as such is in complete contrast with DATE WITH A CHAIR. It has a supernatural element in it, but it’s presented in a totally different manner than my first story.  I hope it makes you laugh. If it doesn’t, that’ll make me cry. I had a lot of fun writing it, and I really enjoy the ‘country bumpkin’ type of characters in it. They make great implements for delivering a story. I use them quite often.

Q: How helpful is the concept of heroes vs villains to telling your stories? Do you need to have villains to tell a good story? Do your characters fall into the category of hero or villain?

Tom Reitze: I had to stop and take a second to think about that one. In some of my stories there are definitely strong and despicable villains contrasted to heroes of various heroity. (I declare heroity to be a word.) Sometimes the heroes are reluctant ones, just people trying to survive and get through some tribulation, or through life itself. They make the best heroes I think, rather than a superhero with a cape that can do anything. You know he or she will always be the victor. I like the sympathetic heroes the best; they are more substantive characters. Those kinds of people walk amongst us every day, and we don’t even know who they are. They are the survivors, and in a way, they are us.

Not all stories need heroes and villains, though. In BERNICE’S BONES I can’t say there are any individuals that fall into those categories. The characters in ‘Bones’ are sort of a general ‘out of touch with reality’ type. None of them are threatening, but you wouldn’t want to rely on any of them saving the day, either. The nature of the story determines the requirement of how solid the personality of the characters needs to be. Sometimes I believe a story can be very effective with everyday people as the cast. Those are the individuals we can relate to most of all. But I also understand people read to come in contact with special people and places they would likely never come across in real life.

I don’t think you will come across Jasper and his friends too often. But I have on occasion and usually walk away scratching my head.

Q: How important is believability or credibility to telling your stories? Do your readers need to believe in your setting, characters, and backstory to become engaged? If not, how do you pull them into the story?

Tom Reitze: In terms of the setting, it is important for what I do for my work to be reasonably believable.  In a science fiction story, I haven’t dealt with the extremes of that style yet, maybe it’s not so important. If you have your characters living on the planet Kronkgorb II in the year 2500, I don’t think there is any form of realism you can come up with. Who has any idea of what that would be like?

I don’t go to extremes to research the details of my settings. After all, it’s just a story, not a geography or history book. And lord knows I can’t afford a research staff. So I use reasonable, believable descriptions for most of the settings of the stories. I may use actual places, or if needed they are made up but kept realistic enough to feel like places you might be able to go to. Then I bend the surroundings as needed by adding the required ingredients to make the whole thing work. You know, you add more sugar to the pie if the cherries you picked are too sour. With enough imagination you can usually make it tasty.

In some of my writings, many of the stories do take place in real places, and I do some research getting those right. But still I add nonexistent features to them so the story will work out the way I need it to. If you need a lake and the location doesn’t have one, that’s no problem. Poof! There’s a lake! The realists will tell me, “That place doesn’t have a lake!” My reply is, when I was there in my mind, it did.

I think most of the time, if the setting feels real to the reader, that’s the most important factor.

The characters are all made up, I can’t think of an actual person I’ve used as an active member of the cast in anything I’ve done so far. They range from being very realistic, to exaggerations of real people. You’ll see what I mean in ‘Bernice.’ Think along the lines of Festus in the old Gunsmoke TV show. A real enough individual, but not someone you would see walking around too often. You might find numerous Festuses in the next story.

I think for what I do, since every story is different, is not rely on characters or settings to hold people’s attention.  Those things change story to story. As in any story of the supernatural some of the ‘characters’ are not even real, such as the Devil in ‘Chair’ and unknown spirits in future stories.

The catch therefore has to be some string that runs through the narrative that drags a reader with it. It could be mystery, humor, suspense, or a need to understand the plight of some character the reader connects with. Maybe it’s simply the structure of the thing more than anything else. If it’s fun or interesting, they will follow. I hope.

Tom Reitze: The genre salad delivers a spicy pepperoncini this time. It’s back to the supernatural and an evil, mean, malevolent, and powerful persona. You can’t escape from him, nor can you kill him. What to do if it inhabits your home? This thing is a killer and perpetual menace.  Find out more by reading ‘Pejito.’

(The sad thing is that Pejito actually lives with me. So far he’s been benign. But he’s looking down at me as I type and I’m not sure I like it.)

“I am a very opinionated individual and was sure I knew what was wrong with society and how to fix it. I planned to write a series of editorials and bind them into a book. Before I started, I realized no one in the world would give a damn about what this unknown writer had to say. I decided to expose my feelings in the form of fictional stories, something people would be more likely to read.

"My 22 lb. cat, Horus agrees. He is very opinionated as well.

"I am contradictory. I will present one idea at one time, and then write another story that presents the opposite concepts. I like to believe I am a person willing to listen to and consider both sides of an issue. Some of my writing is serious, some of it is supernatural in nature, and some of it is humorous (I hope).”

About STORIES OF A DIFFERENT NATURE by Tom Reitze

“STORIES OF A DIFFERENT NATURE is my first foray into eBooks. One at a time they will sneak out and onto Amazon over the next several months. There is a novella ready to make a surprise appearance “between the stories” as well. Watch for them. Give them a try. Let me know what you think at dragonflybooksandart.com  and review them on Amazon.

"Horus and I are ready for you to read the stories. I hope you like them.”