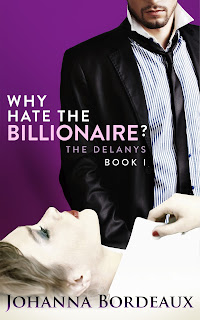 Johanna Bordeaux, author, has just released WHY HATE THE BILLIONAIRE? a “red-hot romance” that is the first of a series of books about five members of the same family, all encountering a billionaire who desires them. (The Delanys is a series only suitable for those 18 and older.) She tells us that all of her characters begin with part of her, and she set the stories in Boston because she appreciates the “rich history” of Boston.

Bordeaux is a psychotherapist from a medical family and is a mental health counselor. She has a degree in English literature with a specialty in Jane Austen. She is currently working on the next book in the series. She loves dancing—any kind.

Q: I embrace the concept of writing a series of books about five members of the same family. It enables you to write a distinct story for each character (book) but with some familiar background and characters—offering a sense of familiarity many of us enjoy. How did you conceive of the idea? Have you already worked out character traits for each of the sisters? Are they based on real people?

Johanna Bordeaux: I, too, like being able to spend a lot of time with familiar people because it lets me more fully explore the characters as time goes on. Cassidy's siblings, Brianna, Kellee, and Norah, as well as her brother, Niall, were already fully developed as I began to write the book. Each play an important role in WHY HATE THE BILLIONAIRE? as they will in all the books to come.

Q: How do you create your characters—particularly the sisters—so that we readers will embrace them? In WHY HATE THE BILLIONAIRE? Cassidy appears to be a real hero – striving to provide for her siblings. What makes us cheer for her to engage in a romance? Do we want her to succeed?

Johanna Bordeaux: All my characters start with a little bit of me, but I draw from everywhere – family, friends, co-workers, hypnotherapy clients, research, reading, and, of course, my imagination. I'm a psychotherapist in training with and come from a medical family, including psychiatrists, so talking about the construct of the personality, how we think, etc., was dining room conversation as far back as I can remember. I was pre-med and worked in a Women's Clinic so some of Cassidy's stories are true.

Just in general, the oldest sibling in a large family naturally takes on some of the child care responsibility. Essentially, for all her dedication to her family and becoming a doctor, Cassidy Delany is a passionate person. She loves her each one of her siblings deeply and not just because they're family, but for who they are.

Cassidy's the kind of doctor who comes into the field because she relates to each of her patients individually and wants that person to become better. She's like a lot of people I've known where, unlike most people, the only person she's never cared about emotionally is herself and she's been hurt in relationships before. She's spent almost half her life taking care of others while no one's ever really paid attention to her needs. Her romance with Daniel isn't just about satisfying physical needs – although that is an important part of it and any good relationship. Cassidy is like your BFF who's always there when you need her. You want her to be happy and have a better life.

Q: Did your upbringing influence your writing? How important is “family” to you?

Johanna Bordeaux: I'm a lucky woman in that my family has been and is always supportive of whatever I decide to do. They thought it was great when I did every job in film/TV and all of them have really supported my writing. I came from a world where academic achievement was important and the discipline that requires has held over to my writing. The most important people in my life are my niece and nephew. I was so fortunate to get to play a large role in their upbringing and was, in fact, a soccer aunt. And a baseball aunt. And a volleyball aunt. Legos club, art class, summer school…

Q: How relevant is the concept of “heroes vs villains” in WHY HATE THE BILLIONAIRE?

Johanna Bordeaux: Any story needs a conflict and I felt that when your main story centers on a passionate love, the forces against it need to be as strong as that emotion. Because of that, I went more with a villainous feel for the forces against Cassidy and Daniel's success. But you have to remember, the people who play villainous roles in the book consider themselves to be the victims.

Q: Are you writing the series purely to entertain readers, or do you and/or your characters have something you want us to learn? Or a message you want to deliver?

Johanna Bordeaux: I was never the class clown, but I was the kid in the back making jokes to my friends. Sometimes with clients, especially, the best way that I could explain something was with humor or a story.

I like entertaining people and it's important to find a place to escape. Readers do half the work since it's their imagination that brings the writer's words to life. I do put in messages, but it's more about the way I see the world. The biggest problems always seem to stem from communication problems, from not taking the step to be sympathetic and looks at the issues from both sides. I love stories about characters who grow, especially in a romance.

Everybody needs to enjoy themselves and relax, but it'd be great if people read my books and it reaffirmed that whatever the relationships are that you cherish, they require effort, trust, and communication – and that's some of the best parts.

Q: How helpful is setting the story in Boston? Does the city of Boston help to describe your characters or motivate their actions?

Johann Bordeaux: From the moment they put the Dick and Jane primer in front of me, I was reading everything. I'm immensely curious about everything and I've always loved the rich history of Boston in terms of its history and culture.  For a while, I put together scientific and medical meetings. So many of the doctors, researchers and students I knew and were friendly with came from Brookline and Boston that I wanted to celebrate them.

Q: What made you decide to become a writer? Have you written other books, poems, short stories?

Johanna Bordeaux: I don't think you decide to write fiction. You just find yourself doing it. At least that's true for me and most of the writers I know. I've been a short story writer since I was young and have written mainly in the science fiction/fantasy/speculative genre. Writing a novel was a wonderful challenge and a romance…. I really hope it is as much fun for the readers and it was for me to write it. More fun since they don't have to worry about grammar.

Johanna Bordeaux: I'm currently working on the second book in Cassidy and Daniel's trilogy WHY TRUST THE BILLIONAIRE? which will be released this fall. The conclusion, WHY LOVE THE BILLIONAIRE? which will come out in the winter. Brianna's story is in its early stages but I already know the basics about the central relationships for all the Delany Books. For information as to when the books become available, you can subscribe to my mailing list at http://eepurl.com/bp7WD9.  If you look at www.johannabordeaux.com, you can see more about the books and others.  I'm also in the conceptual stages of another Romance series.

Q: Tell us about Johanna Bordeaux. What do you like to do when you’re not writing?

Johanna Bordeaux: Read everything I can get my hands on. I love practicing hypnotherapy, working out, and most of all, spending time with my truly amazing niece and nephew, and learning new things. I've had a physical set back, but one of my goals is to take at least one flying trapeze lesson. In my spare time, I wrangle cats, hang out with friends, and I love dancing. Any kind!

Johanna Bordeaux grew up loving Jane Austen, Elizabeth Gaskell, Fanny Burney, Collette, Georges Sand — all the classic female writers who knew that a good romantic relationship is all about the unique personalities of the lead characters and the special spark between them. She received her degree in English Literature, specializing in Jane Austen, the early English novels, and Shakespeare, with a minor in biology. In her profession as a mental health counselor, Johanna learned and deepened her understanding of the human heart and what makes a relationship great. Her sexy romance novels are about true love and fulfilling all of her characters needs for a very satisfactory relationship.

WHY HATE THE BILLIONAIRE? is the first of The Delanys, red-hot romances filled with sensuality, passion, and all the forms of deepest love. Five closely-bonded siblings—Cassidy, Briann, Kellee, Norah, and Niall from a lower, middle class family whose parents were killed 11 years ago each just find a way to survive and thrive from their encounters with the sexy billionaires who desire them.