I am so excited to introduce you to my first historical mystery, THE JUDGE’S STORY. I enjoyed creating my judge based on a real California Superior Court Judge who was the grandfather of a friend—and a law partner of the creator of Perry Mason, Erle Stanley Gardner. My friend introduced me to his grandfather’s memoir. When I read it, I immediately knew I had to create a mystery around him and developed my fictional Judge from the ethics, mores, and beliefs of Judge Louis Drapeau Sr., the grandfather of my friend, Lou Drapeau.

I set the book in 1939, intending to write an entertaining mystery, drawing on events caused by the Great Depression, the looming WWII, and the social issues of a small California town. The case on which I built the mystery is entirely fictional, although I assured it was consistent with similar crimes of the era.  But, perhaps you can get a better idea of the story from the following interview by one of the supporting characters, Clara Bow Wilson, of the protagonist of THE JUDGE’S STORY, Judge Grover Roswell Akers.

Don't miss the short excerpt and the opportunity to enter a giveaway at the end of the interview.

Clara Bow Wilson: Hello, Judge. I’m so pleased that I’ve been asked to interview you. You are one of my most favorite people. I’m so excited to be part of this mystery. Tell us about it right away.

The Judge: Thank you, Clara, I’m pleased to be here to answer your questions. And you’re one of my favorite people, also. And I’m so glad you joined us to help solve the mystery. We couldn’t have done it without you.

This mystery starts in my courtroom in 1939 when you, a 16-year-old, testify against a young 14-year-old about his participation in a robbery-murder. He does not deny being part of the crime, but I know he didn’t actually pull the trigger that killed the store-owner and am concerned that the juvenile shows signs of being a decent young boy who's never had a chance.

Clara Bow Wilson: But that doesn’t matter, does it? I mean, he’s guilty of the crime based on what the prosecutor says is the California felony-murder law, right?

The Judge: True, but as a judge I have some discretion as to his sentence based on his age and his co-operation to identify the real killer. The full punishment for murder could be 25 years or more in a prison. However, I could take into account his co-operation coupled to his young age, which would result in a much lesser sentence—closer to ten years or even less.

However, when he refuses to tell us who the murderer is, I stall for time by postponing my verdict until we can convince him to help. Then you join us to try to get him to talk and my investigator interviews the boy’s acquaintances to see if he can figure it out. But we only have a month to uncover the culprit before I have to sentence him.

Clara Bow Wilson: So that makes me really curious, what do you actually do as a judge?

The Judge: It’s my job to assure a fair trial and in the absence of a jury, I determine the verdict and then the sentence. In our case, there was no jury, and verdict and sentencing were all up to me.

Some of the cases I hear are more demanding than others. They range from murder to reckless driving. I’m particularly interested in juvenile crime. I believe boys who come from a broken home are more likely to turn to crime than those who live with both their parents. I also believe that a boy’s upbringing influences his actions. And certainly the extreme poverty caused by the Great Depression has led to much crime. That’s why I help our Chief of Police with his Boys Club. We work to reinforce what’s right.

Clara Bow Wilson: I think I've always seen you around town, walking everywhere. How did you become a Superior Court Judge in Ventura, California?

The Judge: Well, that’s easy. I was appointed. I lived here in Ventura most of my life, and I was a lawyer. I practiced law for many years. I met lots of people, and I like living in a small town and getting to know everyone. Walking around town is one way to meet people and find out what they're up to.

Clara Bow Wilson: Really? I like cities, myself. There’s lots more happening there, I think. But let’s get back to the mystery. It seems like all we have to do is get our defendant to talk. That should be easy.

The Judge: It should be. But unfortunately the more we try to convince him and the more we investigate, well, we certainly uncover more than I ever anticipated.

Clara Bow Wilson: You bet. Me, too. 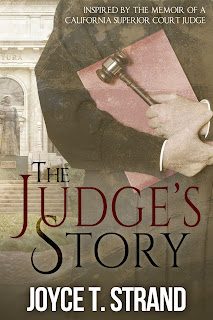 About THE JUDGE’S STORY

A Superior Court Judge with a passion for social justice as well as the law strives to discover the truth behind the mystery of a robbery-murder in a small California town in 1939.

When the Judge hears testimony against a 14-year-old teenager, he realizes that the boy participated in a robbery-murder. However, the accused did not actually pull the trigger. But unless the boy identifies his partner, the Judge must sentence him as a murderer, which would result in prolonged jail time. The Judge’s investigator, along with the precocious 16-year-old girl who identified the boy as one of the thieves, explore different approaches to uncover the murderer. In the backdrop of escalating war in Europe, the financial scarcities of the Great Depression, and the Judge’s caseload, their attempts to find justice for the accused boy and unmask the killer lure the Judge and his friends into sordid criminal activities.

Judge Akers watched the teenage girl enter his courtroom. She had agreed to testify against a fourteen-year-old schoolmate for theft and murder.

He suspected she was nervous. The room loomed in front of her, with high ceilings, chandelier lights, and seats for at least one hundred people, that day less than one-third occupied.


The Judge sat elevated at the end of her walk. He noticed that she stared at the portrait to his left, perhaps to avoid meeting the eyes of the defendant, a typical ploy of witnesses. She walked slowly, almost as if her legs were too heavy to lift. He saw her look up at the skylight in the ceiling.

The Judge was disappointed that the District Attorney required a sixteen-year-old to convict the defendant. He believed that in the modern California justice system of 1939, children should not have to deliver such testimony. Of course, the defendant himself was just a boy, so perhaps that justified a teenager testifying against a teenager.

Mystery author Joyce T. Strand, much like her fictional character, Jillian Hillcrest, served as head of corporate communications at several biotech and high-tech companies in Silicon Valley for more than 25 years. She is the author of the Jillian Hillcrest mysteries ON MESSAGE, OPEN MEETINGS, and FAIR DISCLOSURE and the Brynn Bancroft mystery HILLTOP SUNSET, and her new historical mystery, THE JUDGE’S STORY. Strand received her Ph.D. from The George Washington University, Washington, D.C. and her B.A. from Dickinson College, Carlisle, PA. She currently lives in Southern California with her two cats, a collection of cow statuary and art, and her muse, the roadrunner. She loves attending Broadway musicals, eating at gourmet restaurants, and drinking red wine! 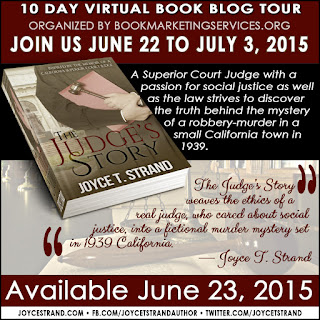 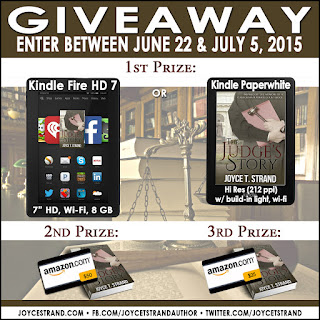