Please welcome Kenneth S. Murray who joins us to talk about his latest thriller, THE JEWELER. Mr. Murray based his protagonist on a real jeweler whose early life fascinated the author. In the novel, the jeweler discovers he gets a rush when he kills someone and is recruited by the CIA as an assassin.

Mr. Murray became an author due to "retirement boredom" combined with his realization that he has a knack for storytelling. To develop his characters, he "becomes" them to the point where his wife questions who is coming to dinner. He values backstory and researches events to mix fact with fiction for credibility.

Please check out the opportunity to win giveaways at the end of this interview.

Q: What inspired you to create your novels and THE JEWELER specifically?

Kenneth S. Murray:  Retirement boredom. When I met Rock Hard, the jeweler's real name, in Grayton Beach, Fl., and his beautiful Narragansett Indian wife, Carla, and learned facts about his life, I knew I had to write a novel about them.

Q: How helpful was your career in a top secret cryptographic unit of the U. S. Army in the Pentagon in writing your thrillers?

Kenneth S. Murray: Zero. It just looks good in my biography and lets readers know that I did serve my country.

Q: What do you do to make your characters compelling so that your readers care about them? --Especially one who seems to enjoy killing.

Kenneth S. Murray: Rock's early and unusual life formed the basis of my interest. Read 'A Note to the Reader,' in the front of the book. Until his first kill, Cole Hanson didn't know he had a Jekyll and Hyde split personality. The reader discovers his affliction as it occurs and makes the hero more human to have a very major problem. The reader develops empathy for him if the writer develops the plot carefully.

Q: I was reminded of John Le Carre a bit when reading THE JEWELER. Heroes and villains become mixed. How would you define a hero? A villain?

Kenneth S. Murray:  A hero can be too good. It's not credible to the reader—but he must have a basically good character, with flaws so the reader can associate with him. Now a villain needs to be, in most cases, pure evil; plus a few dirty, rotten scoundrels who can screw up a lot and give the reader some humorous touches.

Q: Do you write to entertain only? Or do you want to deliver a message? Educate? Inform?

Kenneth S. Murray: Mostly to entertain. Messages are difficult to weave into fiction for me. Educate and inform, yes. However, at the end of my new novel, "The Second Creation," I really take a position through my characters.

Q:  What do you do to make your novels “thrilling” and “suspenseful?”

Kenneth S. Murray: When I first started to write, I found that I had a knack for story telling—a rather wild and crazy imagination, my wife tells me. I did what my favorite cynic, Oscar Levant, said, "There is a fine line between genius and insanity. I erased that line."

Q: How important is back story to your novels?

Kenneth S. Murray: That depends on the importance of each character in the book. Some need more than others, but I don't dwell too much on back story, I always like to keep moving the plot along and add morsels of personality, good or bad, to characters as they appear or re-appear in the book.

Q: How do you make your books “credible?”

Kenneth S. Murray:  Now here's where 'credible' takes a leap. At a book conference an editor from a major publisher told me I could not use the real name of the jeweler - Rock Hard !! Even in fiction, he said you have to build credibility with the reader and no one would believe such a name. I refer to that in "A Note to the Reader."

I research a lot to find actual events that happened—facts that can be intertwined with fiction. Many of the adventures that occur in the novel did actually happen—like the murders in the Vatican. The mother of the dead guard and his wife, just a few years ago, was pressing the Italian police to investigate further. She does not believe the official report from the Vatican.

Q: Do you outline your stories or do your characters just take you along for the ride?

Kenneth S. Murray:  I do not outline. I feel it restricts me. You're quite right—I actually become the characters and live in another mind and body. Sometimes I sense my mind is floating in the ether of space, searching for another person. My wife would ask me sometimes, "who’s coming to dine with me tonight?"

Q: Tell us a little about yourself. What do you do when you’re not writing?

Kenneth S. Murray:  I read a lot—mostly fiction of course. My wife reads non-fiction. We're both into exercise, almost every day. We spent many summers in Colorado, hiking in the Rockies. I play golf about twice a week—any more than that it’s boring. Big into movies when something good comes along. We enjoy going to museums in cities we visit—see the art, and attend symphonies. I really like champagne or sparkling wines and a few red wines with good food.

Ken Murray lives with his wife Beth in Winter Park and has sons and daughters and three grandchildren. A graduate of the University of Virginia, he served in a top secret cryptographic unit of the U. S. Army in the Pentagon during the Korean war organizing intelligence from codes deciphered by the National Intelligence Agency. He moved to Florida in 1958, retired early and for the past fifteen years has been writing novels and poetry.
About THE JEWELER

Cole Hanson learned the jewelry trade early in life. Dealing in emeralds in Columbia, Hanson is kidnapped and taken to the mountain jungle lair of the Black Jaguar, a cocaine drug lord. He witnessesa horrible triple murder, executes the killer, and escapes.
Hanson is overwhelmed by a euphoric rush and struggles with this discovered Jekyll and Hyde personality. He is recruited to become an assassin for the CIA who learns of his strange predilection for death and uses this alter ego to press The Jeweler ever deeper into espionage and assassinations around the world. Murder occurs in England. Diskettes with top secret information about the Soul Catcher are stolen. Incensed, Hanson seeks the killers, but is on his own without CIA approval as clues take him across Europe and to the Vatican for revenge.
After twenty years of service The Jeweler attempts his toughest sanction. Hussein is well guarded moving between palaces and seems an impossible target until fate deals a hand. Hussein flees on his mega-yacht. Hanson battles his way on board for the final action and twists in the Persian Gulf. 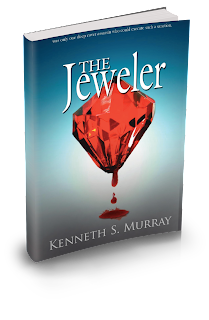