Many of Bell’s short stories have been featured in various publications. She plans to release a second book of short stories later this year and is working on a speculative fiction novel. When she’s not working or writing, Bell likes to go to the movies, live theater, and drag shows. Born in Melbourne, she currently lives in Sydney.

Q: How much and/or did your upbringing, current surroundings, or life events influence your stories in SNIGGERLESS BOUNDULATIONS?

Morgan Bell: Many of my stories feature overt Australiana, such as eucalypts and butcherbirds in Telfer Speck, some feature real places, such as Stockton in Granted, or my old front fence in Newcastle in Shark Fin Soup. A lot of dialogue is expanded fragments of real conversations from real life. Stories like The Package and Mini Play are based on real exchanges, just extrapolated out and with some invented backstory or motivations.

Q: Reviewers say that there are “many layers” to the stories in SNIGGERLESS BOUNDULATIONS and were pleased that they are thought-provoking. How do you provide multiple layers in a short story? Did you intend to deliver a message with your stories?

Morgan Bell: I am a believer in the saying: a good story reads you. It is the ultimate compliment that my stories have been interpreted in so many ways. I find that is part of the craft of writing, leaving enough negative space that any reader can relate. I keep my stories concise and my dialogue and descriptions pointed. Rather than telling the reader what to think present a situation of moral ambiguity and let them draw their own conclusions.

Q: What makes your stories unique?

Morgan Bell: They come from a unique place, within the world, within society, and within my perspective. They do not conform to short story conventions, in structure or in length. They also have a common narrative and themes running through them as a collection. I write entirely in third person, and I have a strong voice, its like being led into the wilderness by someone you trust.

Q: Reviewers also like the range of stories – from the “rather amusing, to deeply disturbing, and even heartfelt.” Were you trying to evoke reaction to various emotions?

Morgan Bell:  Absolutely, it’s a little book of feelings told through the tears of a clown. The face of it is quite funny, but like most comedians there is an underbelly of hurt and sadness. Many of the stories are about not fitting in and the general unease that comes with forming an identity relative to other people.

Q: I was interested to see that your reviewers appreciated your characters. How do you develop multiple engaging characters in a series of short stories?

Morgan Bell: To see the best or the worst of a character you need to put them in a character defining situation. I don’t put them through an obstacle course like a mad puppeteer, I just introduce them to one scenario and let the camera rest there while tensions boil. I also like to present queer characters, characters of various ages and socio-economic groups and stages in life, and present couplings where the relationship is not defined. The reader can observe the dynamic and decide for themselves.

Q: How important is setting to your stories? Could they occur anywhere?

Morgan Bell: Most of the time the setting is not very important, it can be anywhere from a faraway land to the house next door. As a default I will set them in Newcastle Australia, but often the location is not even named.

Q: Can you explain the meaning and significance of the title SNIGGERLESS BOUNDULATIONS?

Morgan Bell: It is a non-sense phrase that stuck in my mind while I was half-asleep. It sounded to me like something the Dormouse from Alice In Wonderland would talk about in between tales of treacle and drawing a “muchness” from much of a muchness. Linguistically it translates to a calculated series of steps forward. I like the riddle quality and the weightlessness of the phrase.

Q: How relevant is the concept of “hero” vs “villain” in your stories?

Morgan Bell:  To think there are no good people and bad people, just people capable of doing both good and bad things depending on the situation. Someone like Constable Skillion in Telfer Speck may seem like a villain in some lights, or maybe he’s lonely and socially awkward and just trying to do his job. The young woman in It Had To Be Done acts in a way that may negatively impact another person, but what motivates her is more defining to her character than the end result.

Q: What’s next? Will you write more short stories? A novel? What genre interests you next?

Morgan Bell: I have another collection of short stories coming out later this year, called Laissez Faire. I am also working on a speculative fiction novel, it is bare bones at the moment, but it will have various female protagonists, the working title is Daughters of Mallory.

Q: Tell us about Morgan Bell. What do you like to do when you’re not writing?

Morgan Bell: I love watching movies, especially at the cinema, and watching tv series like Game of Thrones, Girls, Shameless, True Detective etc. Recently I began a class in mosaic, which has been fabulous. I also like going to see live theatre and drag shows, and dining out and in with friends. I am a bit of a people-watcher so I just like being out in the community, listening and observing.

Morgan Bell is a young Australian woman, born in Melbourne, Victoria in 1981. She attended school in regional areas of New South Wales, including the Northern Rivers, the South Coast, and Newcastle. She currently lives in Sydney and works in Local Government as an engineer. Bell is university educated in civil engineering, traffic engineering, technical communications, linguistics, and literature. She is a member of Hunter Writers Centre, Newcastle Writers Group, and Newcastle Speculative Fiction Group. 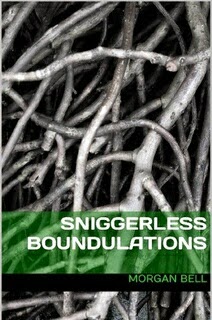 Debut collection of short stories by indie Australian author Morgan Bell. A cross-section between dreams and reality. An examination of the horrors of life, with plenty of peering, in the form of vignettes, micro fiction, flash fiction, and short stories.

“Her eyes were itching and beginning to water, she pawed at them with the backs of her hands until they went red. A mosquito buzzed in her ear, she trod on a bee, and a single line of tiny black ants curled up around her flamingo shin. She began limping, her foot swollen, shaking the other leg like a cat who had stepped on sticky tape.” (Tiptoe Through The Tulips)

“The tune was the call of his love, a tune only he and she knew. But it was different, peppered with some menacing mannerist malice. Constable Skillion swaggered out from the scrub with a shovel slung over his shoulder, tobacco smoke unfurling. He spied Telfer lingering over the dirt mound and stopped his whistling. Telfer snapped to face the silence.” (Telfer Speck)