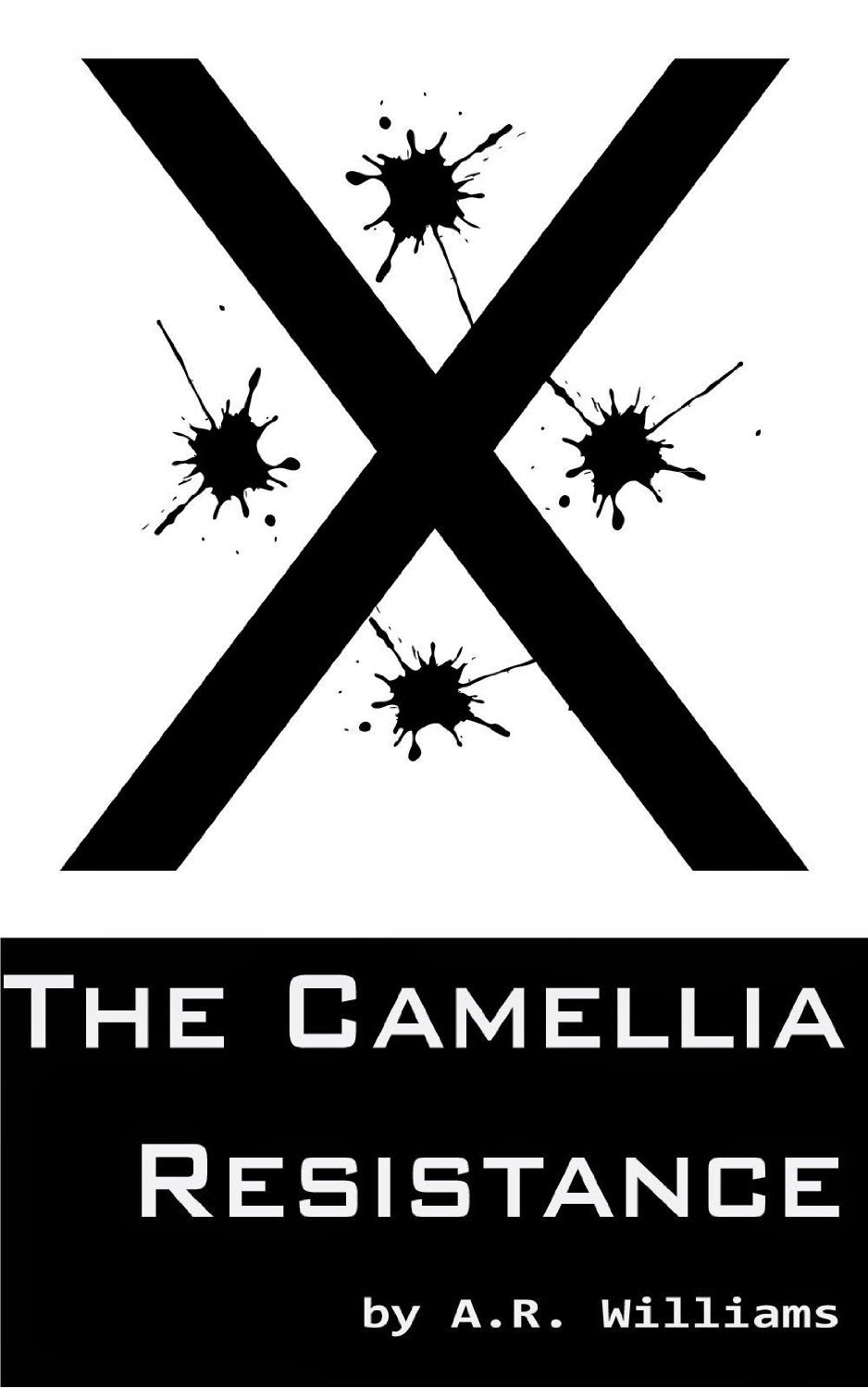 A.R. Williams created The Camellia Trilogy as a result of a conversation with a friend about superheroes and their origins and the realization that “There's always some accident, some government-engineered scientific mishap.” Reviewers of the first book in the trilogy, THE CAMELLIA RESISTANCE, say it’s an entertaining and interesting read… of mystery, survival, conspiracy, and adventure” and “a dystopian future in a society obsessed with hygiene.”

A.R. Williams has always wanted to write, and she embraces the politics and available opportunities offered by living in Washington, D.C. She also appreciates making a “killer” salsa.

Q: How did you conceive of the plot line for THE CAMELLIA RESISTANCE? Is it a story that has to be told?

A.R. Williams: THE CAMELLIA RESISTANCE started as a strange conversation with a friend back in 2009.  We were talking about writing naughty stories and he suggested superheroes having sex.  As the conversation evolved, that turned into superheroes and their origin stories.  There's always some accident, some government-engineered scientific mishap.  Why not a virus, and since we're talking about superheroes and sex, why not a STD?

I wish I could claim JK Rowling's discipline when it comes to plotting, but the plot and the ideas behind it have evolved over time.  I started writing in November of 2009 and the last big idea fell into place in the beginning of 2012.  As a writer, this is the story that hasn't let me go. From my perspective, it had to be told.

Q: What draws you to write in your genre? Would you characterize THE CAMELLIA RESISTANCE as SciFi, fantasy, dystopian fantasy?

A.R. Williams: It is probably a cop-out, but I never set out to write in a particular genre.  It was the characters and the world they live in that came first.  Then it was a focus on "oh dear, I've got to live up to this concept."  Where the book would fall in the groupings at Barnes and Noble was the last thing on my mind, at least while I was writing it.

That being said, it turns out that the trilogy falls solidly in the dystopian fantasy genre.

Q: How do you create credibility for a world set in 2044? How important is back story?

A.R. Williams: Back story is crucial.  Where we come from sets us the parameters for where we can go next.  Our history informs everything.  Our assumptions about the world we live in, the things we take for granted, everything rests on the foundation of what comes before.  In the writing process, the back story weighs as much as the current activity.  I think that will become more evident as we move into the second book.

As for creating credibility, I may have taken the easy way out.  A pandemic flu wiped out most of the population in 1987, an event that was followed by the disintegration of the constitutional government of the United States.  That's pretty much going to grind technological progress to a halt. I didn't put myself in a position of having to build a world where flying personal space suits are the norm.  I think that puts the burden of credibility with the characters living in the culture with its norms and expectations instead of adequately describing the technology.

Q: What makes us care about Willow Carlyle as a character?

A.R. Williams: Well, I've found out that Willow isn't universally likable.  She's been a bit sanctimonious and judgmental, she doesn't understand herself very well, she thinks she has things under control and she doesn't.  But what happens to her - not just the specifics, but the experience of hitting rock bottom - is a pretty universal experience.  She gets to this thing that she never thought would happen to her, this experience that is the end of her world, and it doesn't kill her.  Much to her surprise, she keeps going, imperfectly, of course, but she keeps going.

Some readers can't stand Willow, but really like one of the other characters.  Which is okay with me, because although Willow is the introduction to the world of the Camellias, it is a bigger world than just her.

Q: Are there villains in THE CAMELLIA RESISTANCE? What makes an effective villain?

A.R. Williams: There are villains, but it depends a little on your perspective.  There are people in the book who do bad things, who hurt other people carelessly, who kill.  Back when Veronica Mars was still on TV, the actor that played Logan (Jason Dohring) said about his character "no one thinks of themselves as the bad guy."  The quote is paraphrased because it's been so long ago even Google is having trouble finding the exact quote, but that idea really stuck with me.  I think he was right.  We all do stuff other people don't like, but none of us thinks of ourselves as bad people.
From the internal perspective of a "villain," you're just doing what you have to do, right?  We all have our reasons.  When you cut someone off in traffic, you never think of yourself as the asshole, it is always the other schmuck that wouldn't let you in.

So to me, an effective villain has some ambiguity, believes in whatever course of action he/she is pursuing, and has moments of likability.

Q:  Why write a trilogy instead of just a standalone book?

The trilogy structure, at least as I'm planning to use it, allows me to widen the aperture to this world a little with every book.  Willow's perspective is the first one we meet, and THE CAMELLIA RESISTANCE is about her understanding of the world she lives in. Books two and three will each take a step back, widening the perspective until the whole big world, back-story and all, comes into view.

As for the impatience, my experience with the real world has taught me about the importance of getting started.  You can do something now or you can wait and do everything later, but if you're going to do everything later...  well, later never shows up.  Now is here.  Now is about all you can count on.  I've spent too much time waiting for the perfect conditions, waiting to have everything 100% ready, and really, that's just fear talking.  Do what doesn't take permission.  Do it now.  To quote Janis Joplin, tomorrow never happens man.

Q: Do your characters push you around and lead you to write something you never intended? Or do you stick to your outline?

A.R. Williams: I'm not much of a planner, but I did start out with ideas about who my characters were - and pretty strong ideas at that.  Sometimes they comply, sometimes they don't.  Ianthe started out as a side-kick, Marshall started out as a nice guy 100% of the time.  Warren, at least, was always Warren.  And then some characters showed up wholly formed without invitation.  I keep talking about Morrigan, who shows up in the last half of the book.  She arrived all by herself and pretty much pointed her cane at me, waved her joint around, and said "listen lady, this is how it is going to be."  A lot of things have happened in the process that I didn't intend, but that's why you write...  as much as the reader, I want to know what happens next.

Q: Do you write to entertain your readers and/or do you want to deliver a message or educate?

A.R. Williams: The two aren't mutually exclusive in my view.  We engage with stories to entertain ourselves, but that doesn't mean that the entertainment doesn't contain a thread of truth or doesn't serve a purpose in our lives.  Some of the best stories we've got teach us that we can survive, that others have experienced what we're experiencing - again, rock bottom is pretty universal - and have found a way to carry on.  Other authors have been with me through that rock bottom experience, have held my hand and shown me that it is possible to keep going.  If I can be that for someone else, even just a little bit, then I can count myself as a success.

So if there's a dogma to be found in the book, it is in the value of showing up, as imperfect as you are, as ill equipped as you may be.  It is in making peace with the way life is inevitably going to scar you, and learning to find the beauty and the strength in those scars.  It is that living unafraid is going to get you hurt, but hurt and alive is better than walling yourself off from everything because you're afraid of pain.

A.R. Williams: I'm about 75% done with the next in the Trilogy - The Camellia Reckoning.  Then there is the editing and the re-writing and the early reader feedback and the perfecting to do.  That should keep me busy for a while, and when I'm done with that, book three.  I'm booked for the foreseeable future.  Literally.

Q:  Tell us about A.R. Williams. What do you like to do when you’re not writing?

A.R. Williams: I'm afraid the most interesting part of me is what happens when I'm not paying attention to what the thoughts in my head are up to.  Other than that, it is all pretty normal.  Work.  Swimming.  Music.  My 13 year old dog that has no idea she can't see, can't hear, and can't smell anymore.  Making a killer salsa.  This is another quote I can't find, and I don't even know who said it, but it applies: I live a restrained life so my imagination can run wild.

A.R. Williams is obsessed with language and myth, not just playing with words and making up stories, but with the real-world impact that our words have on the way we live. Words are the only puzzle that never gets boring, and writing is the only thing she has wanted to do consistently. Other interests, such as sewing and photography, become alternate means to feed the writing habit.

Ms. Williams feeds her obsession with curiosity: people, philosophy, technology, psychology, and culture. Living in Washington D.C. is a good source of inspiration. From the sublime heights of arts and achievement available for free at the Smithsonian to the bureaucratic banality of Beltway politics and scandals, it is a great city for fantasy, possibility, power, and consequence—ideal fodder for the fictional life. She lives between an ordinary external life filled with time cards, meetings, and deadlines; and an extraordinary imaginary world where anything is possible and everything is fueled by music.

About THE CAMELLIA RESISTANCE

2044. Willow Carlyle is the youngest cultural epidemiology research director in the history of the Ministry of Health and is on the fast-track for further promotion until a night of passion shatters her carefully constructed life.

Marked and unemployed, Willow falls in with a band of dissidents. Everyone wants something. In the process of discerning friend from foe, Willow begins to unravel secrets that will shake the New Republic of America to its foundation.

* Add The Camellia Resistance to your Goodreads Shelf *

* This tour is brought to you by Worldwind Virtual Book Tours *