Annamaria Bazzi departs from her usual YA books with her recently-released first paranormal mystery, INCANTATION PARADOX, reviewed as “An enjoyable paranormal read with the subtle hints of romance blended in” and “a good creep factor.” Bazzi wrote it for pure entertainment as “an escape novel.”

When the author isn’t writing or reading, she loves to paint, crochet, or go on hikes. She confesses that she’s not a very good cook, but she’s getting better—she enjoys having all her children to dinner.  She plans to release her next YA novel by the end of the year.


Q:  INCANTATION PARADOX departs from your series of the YA fantasy world of Kendíka. How would you characterize the new genre?

Annamaria Bazzi: I actually wrote INCANTATION PARADOX before Kendíka’s story. I wrote the novel because an author told me that to be a good writer I needed to come out of my comfort zone and write something I’d never write. So I did, coming up with mystery and murder and suspense, I hope.

Q:  How do you create a “tangled web of murder, intrigue and magic?” How important is building suspense to telling your story?

Annamaria Bazzi: It wasn’t too difficult to build the intrigue and murder, all it really took is a very evil person as the antagonist. You know, I originally wrote the novel in first person, but became so fascinated by Eric, the evil maniac, that I had to rewrite it in third person just so I could get into his twisted mind.

Building the initial suspense was very important because it was something that could never happen in real life, or at least that’s what Dolores, the main character, believed. The suspense creates tension within Dolores, making her feel like she’s gone crazy.

Q:  Can you explain the title INCANTATION PARADOX (without spoiling the plot)?

Annamaria Bazzi: I’ll give it a try. First, I’d like to say that the original title was Trapped in a Nightmare, but I found another book in the market with this title. Wanting my book to be unique, I brainstormed. Nothing came to mind. I was too ingrained with the nightmare title to see past it. I asked a few author friends who were familiar with the book and Michael Drakich, author of The Brotherhood of Piaxia, came up with this new title for the book. I really liked it.

Q: Your previous works were targeted at young adults. Who are the most likely readers of INCANTATION PARADOX? Is it intended for the YA audience?

Annamaria Bazzi: This novel I did not write with a YA audience in mind; this novel is more for New Adults and adults in general. In the real world good doesn’t always prevail, unfortunately, so this is an escape novel where good wins over evil and the man ends up with the woman of his dreams. But make no mistake, this is not a romance novel.

I would assume that anyone who enjoys reading urban fantasy would enjoy this piece.

Q: What inspired you to create Dolores Raynard? What did you do to make her engaging? Why will readers care about her?

Annamaria Bazzi: Dolores is a single mother with two teenage daughters who is literally plucked from her existence and thrown into a strange world, inside a strange body, surrounded by intrigue and murder. In her devastating predicament, she fights to return home.

Q:  Did you write INCANTATION PARADOX purely for entertaining your readers? Or did you also intend to deliver a message or educate?

Annamaria Bazzi: No, no messages, no education, this novel is for pure enjoyment, quite different from my usual.

Q: Do you have villains and heroes in INCANTATION PARADOX? What makes an effective villain?

Annamaria Bazzi: I definitely have a villain in this story and his name is Brian, at least that’s what it was in his old life. He’s a typical power hungry male who will stop at nothing to gain it. I can’t really say what makes an effective villain, because in my mind to be effective he must also be successful in his endeavors and well, you need to read the novel to decide about this particular villain.

Q:  How helpful is setting to telling your story?

Annamaria Bazzi: With this particular novel, setting is not very important. The interactions and actions of the characters are important. For the longest time, till the end of the novel I had no idea where it was taking place. I finally settled on Seattle, Washington.

Annamaria Bazzi: Next is the YA novel White Swans A Regency World. I’m hoping it can be released around the Christmas holidays. The main character, Kendíka, even has a website where she gives updates on my work. At present Dolores, from INCANTATION PARADOX, lends her a hand. You’re welcome to stop by at http://annamariasbooks.com

Q: Tell us about Annamaria Bazzi. What do you like to do when you’re not writing?

Annamaria Bazzi: One thing I find extremely relaxing is painting, but I also like to crochet. Most of the time I read. I love going for hikes or long walks in the park, I hate cooking, but am getting better at it. The most pleasurable thing is having all my children for dinner.

Although born in the United States, Annamaria Bazzi spent a great deal of her childhood in Sicily, Italy, in a town called Sciacca. Italian was the language spoken at home. Therefore, she had no problems when she found herself growing up in a strange country. Upon returning to the States, she promised herself she would speak without an accent. She attended Wayne State University in Detroit Michigan, where she obtained her Bachelor of Science in Computers with a minor in Spanish.
Annamaria spent twenty years programming systems for large corporations, creating innovative solutions, and addressing customer problems. During those years, she raised four daughters and one husband. Annamaria lives in Richmond, Virginia with her small family where she now dedicates a good part of her day writing.
About INCANTATION PARADOX 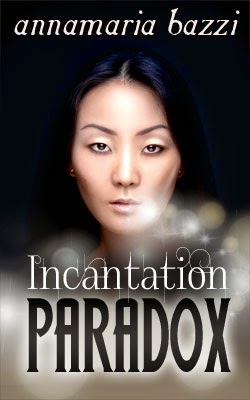 Magic is an illusion. It doesn’t really exist. Or does it?

A horrible car accident destroys Dolores Reynard’s life. But instead of waking up in a hospital bed, she awakens in a teenager’s body. Soon, she discovers she is at the heart of the murderous mystery surrounding the death of Mona, the young girl whose body she occupies. Caught between an evil greater than she ever imagined and a wizard who heals her tattered heart, she is forced to play a dangerous game of intrigue in the hopes of finding a way to return to her previous life.

Will magic be her ally, or will it lead to her demise once and for all. 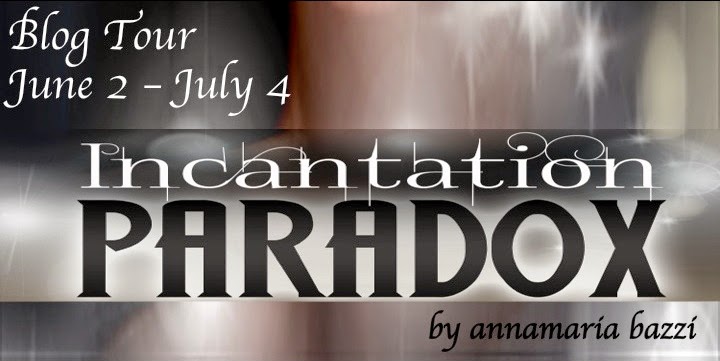