Suspense author Ty Patterson brings us THE WARRIOR, a thriller about a crime committed in the Congo and the “warrior” who chases those responsible. It “is fast-paced, with a great cast of characters,” according to one reviewer.

A “voracious” reader, Patterson started to write THE WARRIOR when his wife and son challenged him to do so. After all, it was on his “to do” list. Patterson believes that his experiences from living on several continents enrich his writing.


Q: What inspired you to write THE WARRIOR?

Ty Paterson: I have been writing for a long while, in the short story/humor piece format and even spent a stint as an advertising copywriter, which helped me hone my skills in packing a punch.

The idea to write a full length novel was on a wish list, but got a kick start when my better half and son suggested one night in December 2011 to stop making excuses, come out of my comfort zone, and start writing.  The events in the Congo which form a backdrop to THE WARRIOR had stayed with me and when I started writing, those events became part of the book and THE WARRIOR was born.

Q: Many of your reviewers describe THE WARRIOR as “a gripping read.” How do you make your story “gripping?”

Ty Paterson: Yes, this feedback gratifies me immensely. I don’t think there is a formula for making a book gripping. If there is one, someone out there is rolling in it.

What I do is to write in the style that I like to read. So I like sparse prose, I like intense action sequences that are short, I like my characters to be driven by a purpose, a conscience, not ‘Dolph Lundgren’ action characters, and I like to write about themes that are big in scale.

I tried to bring all these together in THE WARRIOR and am grateful that my readers found my story gripping.

Q: How important is the setting in the Congo to telling your story?

Ty Paterson: Very. For my first book, I was very keen on writing a story based on a theme that had a large reach, global scale and that affected the emotions of people. I did not want to write about a bank heist or the theft of a nuclear weapon, or the Apocalypse… there are enough books out there on those themes. The Congo and those events were perfect for my story.

The other driver to having that setting was my own experience. I have lived in Asia where in many countries, women do not have a voice; where the system is so skewed and imbalanced that it will take decades for women to be recognized as equals. I wanted to have a champion who took on such a cause and Congo was apt.

Q: Besides “gripping,” your reviewers also mention how much they like your characters. “Ty Patterson skillfully weaves a clever thriller with an ex-soldier as a likeable male lead.” “I also really enjoyed the secondary characters a lot.” What makes your characters “likeable?”

Ty Paterson: When I read my first review with that description, I couldn’t stop grinning like a goofball for a week till my son reminded me not to inflict that look on him.

My characters are not Superman or Ironman, who do unbelievable feats. They are characters who believe in certain values and commit everything to those values. I think it is that aspect that makes my characters likeable to my readers. We live in a world where, especially in recent years, the rate of change is so fast that people change on an almost daily basis. So to read about a character that has a value system and holds steadfast to it is something my readers like in my opinion.

In terms of secondary characters, I have always been fascinated by movies/books that depicted a strong bond; Butch Cassidy and the Sundance Kid, Tango and Cash, for example, and I wanted to bring out this bond in my book. I think that has resulted in readers liking the secondary characters too.

Q: What makes a good villain?

Ty Paterson: A very good question that no one has asked me before. A villain is of course someone everyone hates, but does the villain have to be all evil? Does the villain have to have a background that resulted in his having a set of beliefs that are against societies? If villains do acts of good, do they become better villains?

Again, I think there is no formula to what makes a good villain. I think the character of the villain has to be dictated by the overall plot and that is how I created my villain.

And yes, I have sidestepped that question a bit because I haven’t a clue.

Q: Is THE WARRIOR a story to inform readers? Or to entertain?

Ty Paterson: Great question. I am a voracious reader and read anything from the labels on toilet paper rolls to books on quantum physics, economics, fiction, thrillers… anything that captures my mind.

I have learnt a lot from books that were pure entertainment and some of those facts stayed in my mind just because I read them in pieces of fiction. When I was in high school I read an Agatha Christie book that mentioned the corrosiveness of Sulphuric acid. Guess what? That has stayed in my mind all these years but I have forgotten all those chemistry classes and the experiments.

So the short answer is my book is primarily to entertain, however there are themes in my book that will be informative and will stay in readers’ minds. And in my very humble opinion, that should be what good entertainment is about.

Q: How helpful was your background to forming your story?

Ty Paterson: Very. If I had not spent some time in Asia, in all probability my book would have been in a totally Western milieu, with a different plot. My background has shaped the story for sure.

Q: Do you outline your stories or do your characters take over?

Ty Paterson: I am not one of those authors whose characters scream in their minds and make them rush to the keyboard to let those poor things out. I am less romantic that way.

I outline my stories, but it is a rough outline with some lines nonexistent or blurred. I am not sure if there are authors who write from a fully formed outline and structure right from the beginning. If there are, I would love to meet them.

My characters do influence the plot to some extent as I start writing, but in general I know the start, the end and the bits in between, so my characters do not radically alter the plot.

Q: What do you do when you’re not writing? Are you a dancer? Do you do standup comedy?

Ty Paterson: I would like to say that I am really born on Krypton and if you are lucky you might see me up in the sky with the cape and the red underpants. Unfortunately, in the world where bills and mortgages have to be paid, I work at a job that I love…however; I hope that my writing will enable me to write full time.

Readers, you know what I mean. Appreciate your love and please don’t stop showing it!

Ty discovered reading at an early age and the backs of cereal cartons were frequently part of his reading diet when nothing else was at hand.

Reading has held him in thrall ever since. Reading takes him to multi textured worlds and fills his world with visual imagery; all fuelled just by the power of the black word on a white page.

He uses his life experiences, of living in a couple of continents, of selling tea to street side stalls, to infuse his writing. And to take his readers on the same flights of visual imagination that his favorite authors take him on.

Ty is privileged that his wife and son shape their lives to accommodate his writing. They also humor his ridiculous belief that he is in charge.

If you enjoy reading thrillers from the likes of Lee Child and Robert Crais, you will enjoy THE WARRIOR. 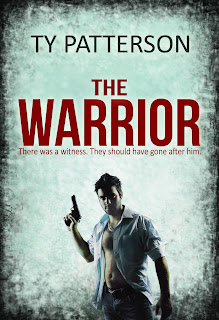 Plagued by the scale of the crimes and the helplessness of the victims, he is bent on his own private justice.

What transpires is a fast pace gripping journey that stretches from the Congo to New York, into the world of corrupt politics, influential politicians who want him dead, and government agencies who are against him.

This breakneck paced read is an edge-of-your-seat thrill machine, with a plot so full of surprises; it will carry your imagination beyond the final word.


It’s in Kindu, almost in the center of the DRC that he first hears of a group of contractors who have gone to the other side. The Congolese who mention them are fearful and whisper about mass rape and these contractors in the same breath. ‘La mal personnes’ and ‘atrocities’ are phrases used by them, describing the contractors as evil, committing atrocities. Many Ngok and Primus beers over several days and he hears that the contractors and the FDLR soldiers they are associated with are now based near Lake Kivu near the border with Rwanda. After all it’s quite difficult for 6 white men to blend in with black soldiers so they get noticed. The Congolese talk about a band of black and white soldiers who capture mines, often killing several mine workers and then looting the mines. Artisanal and small scale mining is wide spread in the DRC and because of the small scale of operations; it is very easy for armed bands of men to hijack the mines. The FDLR soldiers and the white skinned contractors roam across the mines, taking them over and trade in gold, minerals, diamonds, ivory, coffee, drugs, anything that has value. They prey on the local villages for food and women. The DRC’s army and police is either incapable of dealing with this force or is unwilling. Or, more likely, is in collusion. The UN Peace Keeping Force is usually too late to the scene and stretched too thin.

On a few occasions he is lucky to meet victims who have suffered at the hands of this band of soldiers. They all speak of the ruthlessness of the soldiers both black and white. He records his conversations with the Congolese victims and pretty soon has a dossier of atrocity. A few victims have even identified the mercenaries from their Agency photographs he is carrying. He has decided to visit a few villages in North and South Kivu before making his way back to Kinshasa and then back to the US.

And so he lies on the outskirts of Luvungi one of the villages in the vicinity of Lake Kivu. This is the third village near Lake Kivu that he has surveilled. It’s been a couple of hours since the trucks left, the jeep is still there, and nothing has changed. He does not know how many soldiers have gone in the trucks or how many have been left behind. He knows these have been the FDLR soldiers since he recognizes their uniforms, or soldiers impersonating them.

Of course he is going in; it isn’t in him to be a passive spectator. Andrews can go firetruck himself.