Welcome F.C. Malby who joins us to talk about her recently-released book TAKE ME TO THE CASTLE.  Malby wrote her novel to inform people about “a time in history which has shaped much of Eastern Europe" -- February 1993 in the newly formed Czech Republic.  Malby has personal experience with the turbulent times following the fall of communism. She taught English there as a teenager.

Originally from East Anglia, UK, Malby has travelled extensively and taught English in the Philippines and London in addition to the Czech Republic. She was a wedding photographer and teacher before becoming a writer.  She likes to bake and experiment with recipes, which help to inspire her.

Q: What caused or inspired you to write TAKE ME TO THE CASTLE? Where did you get the idea?

F.C. Malby: I spent several months teaching English in the Czech Republic as a teenager just after the walls came down and it was an experience that will never leave me. The changes were rapid and many people were afraid of the freedom that they had been given and afraid of the changes in their lives and their country. There was a security in having 100% employment and in knowing the rules but I found it unsettling.

Q:  One of your reviewers said, “F.C. Malby has managed to bring history to life through the eyes of her well-crafted characters” Did you create your characters to tell a story, or did your setting drive your characters?

F.C. Malby: The setting definitely drove the characters. I wanted to write about the Velvet Revolution and the fall of the Berlin Wall and to look at how those changes impacted the lives of ordinary people.

Q: How do you make your characters engaging?

F.C. Malby: You have to get inside their heads and to think the way they do. Engaging characters often have character flaws or are driven by a particular need and it is important to keep this in mind.

F.C. Malby: I think both and neither. The story has a wider arc of good and bad set within a very complex time in history. The narrative is more about what a situation will drive a character into without their willingness to actually go there.

Q: You have traveled extensively. Does travel help you envision stories?

F.C. Malby: Absolutely. Setting is key to a good novel and you have to know a place, whether it be real or imaginary. If you are using a real location, you really need to know the details: the feel of the place, the sights, sounds and smells which the reader needs to be able to experience through your words alone. Without this the story is only two-dimensional.

Q: Do you write to entertain, inform and/or influence?

F.C. Malby: I would say hopefully to inform and influence, but writing has to be entertaining to engage the reader. I wrote TAKE ME TO THE CASTLE to give people an idea about a time in history which has shaped much of Eastern Europe. It is a period about which very little fiction has been written and I believe it is an important jigsaw piece in a distant landscape. Prague has changed almost beyond recognition. When I was there in the depths of winter, you didn’t hear a single western voice and there were no vegetables, just meat, dumpling and wonderful cake. Now Prague has become very westernized.

Q: What is your ultimate goal as a writer?

F.C. Malby: To grow, develop, and to continue to bring fresh ideas into print. When someone emails or contacts me to say that they loved the book it makes the hard work worthwhile. I write because I love to write and I want to be the best that I can be so it takes work. I will continue to read and learn the craft.

Q: When you’re not writing, what are you doing?

F.C. Malby: I ski when it’s cold enough. I am also a photographer and an artist. I love to paint and to travel and take photographs. I also enjoy film and theatre which inspires my writing. It is important to take time away from work, especially if you work from home. I bake and experiment with recipes. That is often when the next idea strikes.

F.C. Malby grew up in East Anglia, in the UK, and has taught English in the Czech Republic, the Philippines and London. She gained a First Class BA (Ed.) Honours Degree in Geography and Education, and became a teacher and a wedding photographer before beginning her writing career. Her first novel, TAKE ME TO THE CASTLE, published in December 2012, has been nominated for The People's Book Awards. She is currently working on short stories and further novels.

About TAKE ME TO THE CASTLE 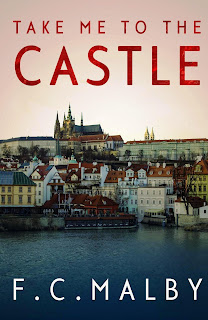 The door opened slowly, and she could see the outline of five men standing in the corridor. Her room was far enough away from the figures for no one to notice her nose pressing into the door frame. She was aware of her own breathing and tried to slow it down, slow down her heartbeat until she was invisible. The idea in these moments is to be completely invisible. There were a lot of invisible people in Prague, doing invisible things to other invisible people.

What would you do to secure your own freedom?

February 1993. Walls between East and West have dissolved, following the Velvet Revolution of 1989. It is a harsh winter in the newly formed Czech Republic, but the nation celebrates. Arriving in Letovice, Jana is trying to escape a personal loss and come to terms with the changes in her country and in her own life. She stays with the Martineks and meets their son, Miloš. When he leaves Letovice and she travels back to Prague, she encounters a deep and shocking betrayal. Jana meets Lukas, a conservator working on the restoration of a mosaic at the Cathedral of St Vitus. But who is he and what is he hiding?

An evocative portrayal of life during the fall of communism: It is a sometimes heartbreaking tale of deception, distrust and the need for redemption in the aftermath of a regime in which no one can be trusted, not even someone you thought you knew.