Welcome, Tina.  I am so pleased to be speaking with a finalist in Kindle Book Review's Best Indie Book Awards for Literary Fiction.  Your book RIVER IN THE SEA is very special – you vividly and compassionately portray one girl reaching adulthood in The Netherlands during WWII when everything she believes about family, friendship, and loyalty is questioned by war. I found it compelling and very real.

Q First, can you tell us what inspired you to write about a teenage girl in The Netherlands during WWII?

This is my family history. While I certainly embellished, changed, truncated, etc., this story is heavily based on true events. Leen De Graaf is my mother’s birth name and Leen is very much… Leen.  From a writer’s standpoint, I always believed it would make good fiction – once I figured out how to do it, which took some doing.

But beyond that, I think there’s a universality to the story that was really attractive to me. I think each of us, especially during our youth, feels this push/pull of what you should do versus what you think is right, of learning that the world is miles from black and white, and that all the ambiguity of life is both beautiful and incredibly terrifying.

I’m also incredibly proud of my heritage.  Most WWII fiction doesn’t take place in the Netherlands, and very few are aware of Friesland and its rich cultural history. Frisians are a very old, distinct ethnic group and I’ve always believed its uniqueness deserved a story. Put it all together, and there was no way I couldn’t write this book.

Q The back story of German occupation and life in an occupied country are critical to your story. How did you apply your research/background information to make your story so credible?

I am so incredibly lucky in that my parents, now 80 years young, took us to Friesland several times during my childhood. Their childhood homes are where much of the story took place, so I had pictures and my own memories to provide a sense of setting.  As a kid, I grew up listening to terrific, bizarre, and sometimes horrifying stories of what they experienced during WWII, stories of young men hiding in hollowed-out potato heaps and the villagers pouring milk into the canal rather than giving it up to raiding soldiers. I think those stories seared onto my synapses at a young age.

I have to give a lot of credit to my father. While RIVER IN THE SEA is based on my incredible mother and her family history, my dad remembered detail upon detail that you just don’t find in any history book. For example, there is a scene where a young woman’s clothes are stained with daffodil pollen that came straight from him. He told me about fueling lamps with diesel fuel and what the soldier’s uniforms looked like, all those details you need to bring that time to life.

Besides my parents, I relied on the good old Internet for WWII dates and important names. Otherwise, I tried to keep it very focused on the domestic.

Q How do you build your characters? Especially Leen is very engaging – a 15-year old experiencing harsh circumstances as she is growing into adulthood. Her reactions to events are very real – and very much like a teenager’s.

That is a very good, and very tough, question. And, thank you! I am very motivated by plot and “moments” – key scenes where the drama is ramped up.  So I don’t start with character. This has the unfortunate effect of increasing my writer’s self-doubt. I have learned, though, to trust revision. When I first draft, I feel very distant from the characters, as I’m just trying to get words on the page and move to the next piece. The important key is, though, to keep writing! However, by the end of the draft, I am usually crying as I write the important moments. I think what I’m saying is that I get to know the characters as I write, and then in revision, I try to invest more in the characters since the plot is usually laid out. I try to mentally step into his or her shoes and feel the physical sensations, the emotions, think those thoughts, so that the voice feels organic. It’s hard to describe but I feel like I get up out of Tina and sit back down in the character. Perhaps it’s a bit like method acting (although trust me, there will be no acting in my future).

I very much wanted Leen to be a teenager. Impulsive, vulnerable, sometimes shy, sometimes outspoken. It probably didn’t hurt that my stepdaughters were in varying stages of adolescence when I was revising!

Q Who are your targeted readers and what are they looking for?  I find your book very compelling – although I am in the, let’s say, over 50 women’s category.  Yet I suspect if someone reads that the book is about a “coming of age” 15-year-old girl during WWII in The Netherlands they might dismiss it as a story for teenagers.

Excellent question! This has been a toughie for me, as I feel like this book could be YA and could be straight literary and then it could be historical. That makes the target reader anyone from 16 to 99! But it’s a wonderful “problem” to have, really. I know of young women who identify with Leen, as well as more mature readers who return to their teen years and identify with what Leen went through.  We’ve all had to come of age at some point, which is why so much teen fiction and literature resonates with readers of all ages.

That said, I think I have had the strongest reaction from older readers.  I’ve had women in their 60s email me about the story, about experiencing those emotions, of feeling caught between pursuing their own authentic selves and the expectations their world had for them.

Q When you’re not writing or teaching, what do you do? Hobbies? Sailing? Knitting? Standup comedy? Favorite music?  Favorite authors?

I am a serial monogamist when it comes to hobbies, although a few have stuck with me. The latest: running. Before summer began, I had spent a year so incredibly busy (and rewarding) that I didn’t exercise much beyond walking my dogs – which, by the way, is something I spend considerable time on, and one that I am pretty sure keeps me sane.  And then, for some reason I still can’t pinpoint, I thought, I want to run. This comes after years of hating it and never doing it beyond an occasional five minute spurt here and there. I just ran my first 5k and am just starting the training for a 10k.

Another new-to-me obsession is stand-up paddle boarding. It’s something I do by myself, with my husband, friends and family… Anyone I can get on a board! Living in Oregon provides ample beautiful lakes and rivers to explore, and there’s nothing like gliding over water and taking it all in.

Craft-wise, I’ve been sewing for about four years now, and I love to make my own clothes. I’m about to tackle making my own jeans. Yes, jeans. I just ordered rivets!

Of course, there’s reading. I read everything from the Sookie Stackhouse books to Edith Wharton. My Kindle is on the fritz, though…. 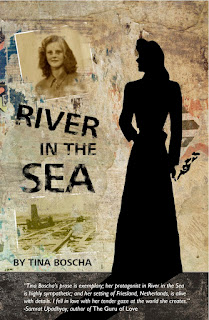 RIVER IN THE SEA

At fifteen, Leen De Graaf likes everything she shouldn’t: smoking cigarettes, wearing red lipstick, driving illegally, and working in the fields.  It seems the only thing she shares with her fellow Dutchmen is a fear of the German soldiers stationed nearby and a frantic wish for the war to end.  When a soldier’s dog runs in front of Leen’s truck, her split decision sets off a storm of events that pitches her family against the German forces when they are most desperate – and fierce. Leen tries to hold her family together, but despite her efforts, bit by bit everything falls apart, and just when Leen experiences a horrific loss, she must make a decision that could forever brand her a traitor, yet finally allow her to live as her heart desires.

Tina R. Boscha grew up in Wisconsin, a second-generation daughter of Frisian immigrants.  She holds a BA and an MA in Sociology and earned an MFA in 2002 from the University of Oregon’s Creative Writing Program, where she also served on the editorial board of The Northwest Review.  She is a recipient of the Leslie Bradshaw Fellowship from Oregon Literary Arts, and in April 2007 received a research and living expenses grant from the University of Oregon's Center for the Study of Women in Society to support the completion of her novel.  A chapter of River in the Sea, “Fernedering,” appeared in The Portland Review and was nominated for a Pushcart Prize and also to the 2004 Best New Writers In America anthology.  Her short fiction has appeared in the Colorado Review and other small literary journals.  In August 2011, she self-published her novel, River in the Sea as both an ebook and paperback.

Presently, Tina divides her time among numerous pursuits, including teaching composition at the University of Oregon and at Lane Community College. She is represented by Curtis Russell of PS Literary.

Join Tina Boscha and 9 other award-winning authors in the BEST INDIE BOOK FESTIVAL, 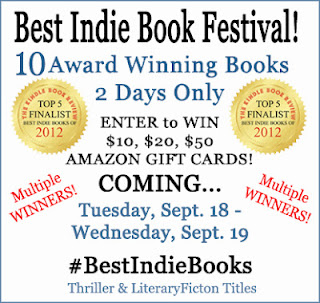