Carl R. Brush is a writer. He just released his historical thriller, The Second Vendetta, based on real people in the pre-WWI San Francisco area. He has also published his work in The Summerset Review, Right Hand Pointing, Blazevox, Storyglossia, Feathertale, and the Kiss Machine. In the following post, he shares some tips on turning real historical people into engaging characters.

If you write historical fiction, you’ll almost surely want to include known historical figures in your narrative. Our readers hunger not only to learn about, but to experience these people and their times with an intensity no textbook can offer. Presenting your audience with “real” characters creates a sense of authenticity that puts the reader’s imagination in the midst of the period and the scene like no other device. They’re also fun to write.

Sometimes, they’ll simply pass through, adding a bit of background and color. Your fictional family might, for example, catch sight of George Washington in a parade, but would be no more likely to meet him than you are to meet Barack Obama. Often, however, you’ll involve such characters closely in your story. In a novelized biography they’ll likely appear as protagonist, like Nell Gwynn in Gillian Bagwell’s Darling Strumpet. More often, they will take ancillary, though important, roles like Ambrose Bierce and Hiram Johnson in my The Second Vendetta.

With well-known characters such as Nell Gwynn, the world (not to mention that pesky scholar) knows so much about your subject that your task is not so much to create a story as to make what is known entertaining and absorbing and to perhaps add facts and events that are not general knowledge. (“My goodness, how interesting. I didn’t know that,” is the reaction you want from your readers.) You’re free to invent details and sparkling conversations, and you get to allow readers delicious peeks behind the curtains to find out what Charles II was “really” like, but you must hew closely to the basic facts.

Of course, you do have latitude where there is scholarly disagreement or speculation, as when Hilary Mandel in Bring Up the Bodies, decided whom to include and whom to omit in her narrative about Anne Boleyn’s supposed parade of lovers. However, your essential job is to take the body of known fact and opinion and transmute that “life” into art. You can’t have someone tomcatting around the South Seas at a time when he was supposed to be occupying the White House. 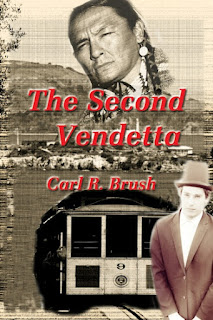 Lesser known figures such as my Ambrose Bierce and Hiram Johnson gave me more storytelling latitude than either Bagwell or Mandel had. Many will recognize Bierce as a turn-of-the-20th-century San Francisco newspaper columnist, the author of The Devil’s Dictionary, and, perhaps, as the main character in Oakley Hall’s recent fine mystery series. Not so many will recognize Hiram Johnson as the premiere reform governor in California History. Elected in 1910 (the election in which my protagonist, Andy Maxwell, becomes a reluctant candidate for the state assembly), Johnson served only two years of his term (No Palin-like resignation. He went to the U.S. senate.), but in that short time brought to the state women’s suffrage, the recall and the referendum, and a spate of anti-trust legislation that loosened the railroad’s stranglehold on the California economy.

Not that I didn’t have to do plenty of research. However, I didn’t feel I had to include most of what I found out, and I didn’t have to present every detail with great historical accuracy. I had parameters, of course. I couldn’t have Bierce writing for the Chronicle, for example, instead of the Examiner; or I couldn’t locate him in Los Angeles instead of San Francisco—Well, I could, but I’d have to come up with dandy historically inaccurate reasons for doing so. Although people in general may not know much about Bierce, plenty know better than that. And there are California history buffs who know every detail. Plus, readers of historical fiction love to catch us up in errors, don’t they?

Johnson’s life is even less well-known, so, although I applied the same criteria as with Bierce, I felt more free to wander. After his progressive period in California, Johnson had a change of attitude, became a granite conservative, and his long stint in the U.S. Senate brought him fame for opposing America’s entry into both WWI and WWII. I used that metamorphosis as an excuse to present him as a stubborn and intractable man whose political power came less from idealism than ambition.

I was free, then, to involve both men in my protagonist’s dispute with the University of California and to create their characters to suit my story instead of being bound by historical reality to the same degree as with a more biographical project.

Whatever your subject, however, it still comes down to what Hemingway said: A writer should create living people: people, not characters.  A character is a caricature. Simply invoking the name of historical persons won’t give them life. That’s as much—or more—up to you as it is to the writer who fabricates a story from imagination alone.

Not again.
It’s taken Andy Maxwell two years—1908-1910—to help his family recover from the vendetta that nearly killed his mother, burned their Sierra Nevada ranch house, and exhumed some long-buried family secrets—including the fact that his father was black. At last, Andy thinks, he can return to University of California and pursue his history doctorate in peace.
Not so.
First of all, it turns out they don’t want a miscegenated mongrel in the Ph.D. program. Just when he’s enlisted the eminent San Francisco journalist, Ambrose Bierce, to help him attack that problem, it turns out that marauder who started all the trouble in the first place didn’t stay Shanghaied. Michael Yellow Squirrel is back for another try at eliminating every last Maxwell on earth. So much for school.
And then there’s the election.
Reform gubernatorial candidate Hiram Johnson wants him to run for the California legislature and help foil the railroad barons.
And then there are the women.
The debutante beauty and the Arapaho princess.
So, how is Andy Maxwell, going to deal with all these quandaries? The Second Vendetta answers that question and many more with a tale-telling style that pulls readers into the book and doesn’t let them go till they’ve turned the last page, wishing there were more yet to turn.
LINKS