According to Nikolai, the pairing of protagonists helps “create tension and move the plot forward.”  By setting this mystery in Ottawa, she takes advantage of the capital city’s  healthcare decision-making, which supports the development of her plot.

Nikolai is currently working on Book 6 of her mystery series. When she’s not writing, she enjoys baking, especially anything with chocolate in it as she is a fan of desserts.

Q: What draws you to write Mysteries? Who is your favorite mystery author?

Sandra Nicolai: Puzzles have always intrigued me, and mysteries even more so. The ultimate test arrived the day I decided to write my first mystery novel. I’ve been published for five years now, but ensuring that all the pieces in a mystery fall into place is still quite the challenge. And I love every minute of it!

Some of my favorite mystery authors include Donna Leon, Linwood Barclay, Kathy Reichs, James Patterson, and Louise Penny. I also enjoy discovering new authors and regularly add their books to my to-read list. I don’t think I’ll ever catch up!

Q:  In your new book, BROKEN TRUST, you’ve paired Megan Scott and Michael Elliott together again in your new book as double sleuths to solve the mystery. Does this pairing help to develop the plot? Romantic interest?

Sandra Nikolai: Yes to both questions!

In my latest book, BROKEN TRUST, as in the other books in the series, Megan and Michael’s characters differ in ways that help to create conflict in the story and move the plot forward. As an investigative reporter, Michael meets with seedy informants in dark alleys in his hunt for murder suspects. He thrives on taking risks. Megan’s participation in his sleuthing activities provides an exciting break from her “boring” job—ghostwriter of non-fiction material. Since she tends to be cautious and worries about Michael’s safety, their covert outings enable her to pull him back from the brink of death when necessary. Of course, Megan’s curiosity sometimes gets her in trouble too, so it works both ways.

The romantic interest between them originated in the first book, FALSE IMPRESSIONS, and continues to grow through the series. Is marriage a possibility? Michael might be inclined to the idea, but Megan’s bad experience with her first marriage planted doubts in her mind. The topic creates tension between them, which helps to develop the plot.

Q: How do you turn your ghostwriter into an amateur sleuth? What makes her credible?

Sandra Nikolai: FALSE IMPRESSIONS launched Megan’s investigative teamwork with Michael when they became prime suspects in the death of her husband and a female companion. That’s when Megan got her feet wet, so to speak. Her interest in Michael’s work prompted him to take her along on some of his ventures. They share a high standard of ethics that drives them to seek justice for crimes committed, but they have different approaches to analyzing the evidence.

When it comes to suspects, Michael is objective and trusts his instincts to guide him. Megan is an in-depth researcher and often deciphers the tiniest detail and nuance on the path to solving a crime. She bounces her theories off Michael and, although he doesn’t always agree with her, he appreciates her input. In the end, Megan’s contributions play a key role in resolving the crime.

Q: How useful is Ottawa as a setting to help develop your characters or the mystery? Would the story be different if set elsewhere?

Sandra Nikolai: Ottawa is Canada’s capital city and the setting for BROKEN TRUST, the fifth book in my mystery series. The city is home to the federal government where major political decisions affecting national health are made. My sleuths investigate the fentanyl crisis here. For readers unfamiliar with fentanyl, it’s a synthetic drug that’s fifty times stronger than heroin and the cause of thousands of deaths by overdose.

My sleuths are Canadian and have a special interest in how organizations are handling the drug crisis here. As they investigate the death of a young woman who supposedly overdosed in their Ottawa hotel room—yes, they walked in and found her body!—Megan and Michael interview key administrators regarding the fentanyl problem. A mystery set in a government town might sound dry to some readers, but I promise you, it’s a thrilling ride!

Q: Reviewers enjoy the suspense you’ve created in your previous mysteries. How do you create that page-turning drive?

Sandra Nikolai: Readers like to get to the heart of a story, so I keep the narrative as tight as possible. I cut back on excessive descriptions of people and places and avoid dialogue that doesn’t move the plot forward. I pepper my stories with clues (including red herrings), tension, and conflict.

My chapters are short and end with a cliffhanger. I ensure the momentum is fast-paced so that the action doesn’t stall. Readers tell me they can’t stop reading—they have to find out what happens in the next chapter. This tells me my techniques are working!

Q:  What do you consider to be the key elements of a satisfying mystery?

Sandra Nikolai: The first pages should draw in the reader. Without a captivating hook, the reader will move on to another book. Setting a mysterious mood that foreshadows the journey ahead is also an important element.

Suspenseful dialogue between realistic characters is vital to retaining reader interest. It’s similar to eavesdropping on a heart-pounding conversation between people you know. My suspects often lie or withhold crucial information, but I keep readers in the loop so that they come across the clues at the same time as my sleuths do.

Wrapping up loose ends by the end of the story is another essential element. Readers need answers to confirm what they already know or didn’t know about who, why, what, and how. A satisfying resolution to a mystery means a reader will most likely read another book by the same writer.

Q: Why do readers care about your characters? How do they relate?

Sandra Nikolai: Like most people, my main characters have strengths and insecurities. Readers can relate to Megan’s determination and Michael’s courage as they track down perpetrators. They admire their mutual loyalty and respect and the way they interact with each other.

Readers root for Michael and understand his anger and frustration when he lacks the evidence to bring a cold-blooded killer to justice. They empathize with Megan’s lingering memories about her husband’s infidelity, as well as her qualms about Michael’s safety and the future of their relationship. They support Megan as she confronts dangerous situations, despite her fears.

Q: What are the attributes of an effective villain/criminal?

Sandra Nikolai: A credible villain is one that has good qualities and bad qualities. The criminals in my stories often work in typical jobs and have family or friends, yet they manage to get sidetracked by the darker side of life.

We’ve all seen news reports about police arrests of doctors, lawyers, and professors. Who would think that people in such respectable positions could be murderers? How many times do neighbors discover that the “man who lives down the street” is a killer? Criminals can’t be typecast. The creepiest part is that they often live among us.

Sandra Nikolai: Book #6 in the series. My sleuths return home to Montreal where their greatest challenge awaits them. It will be a roller coaster of a thriller. Oh, I can’t wait to write this one!

Q: Tell us about Sandra Nikolai. What do you like to do when you’re not writing?

Sandra Nikolai: I love desserts, so I’ll bake anything with chocolate in it. No surprise there, right? I also like to read, shop, watch movies, go for walks, and catch up with friends over coffee. My routine might sound dull to some people, but the first half of my life was quite hectic, so I welcome the change. I wouldn’t be able to write without the peace and quiet I now enjoy.

Thank you for inviting me, Joyce!

Author Sandra Nikolai weaves ordinary characters into extraordinary, life-threatening situations, using the premise that evil often lurks in familiar places. She is the author of a mystery series featuring ghostwriter Megan Scott and investigative reporter Michael Elliott. BROKEN TRUST is the fifth book in this series.

Sandra has also published more than a dozen short stories online and in print, garnering Honorable Mentions along the way. She shares her writing experiences on her blog and has been a frequent guest writer on other blogs. 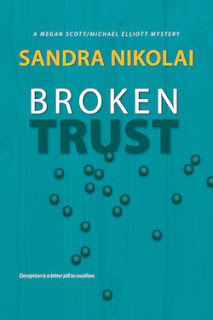 Hotel rooms often come with perks. A corpse isn’t one of them.

Ghostwriter Megan Scott and investigative reporter Michael Elliott discover the body of a young woman in their Ottawa hotel room. Not what they expected on a business trip to Canada’s capital. She’s wearing a black lace teddy. A carafe of red wine and two glasses sit on a table. A closer look inside her purse reveals thousands of dollars, three business cards, and a supply of pills.

The detective initially writes off Becca Landry’s death as an open-and-shut case of overdose, but Frank Landry, an ex-military, believes his wife was murdered. Convinced that autopsy results will prove him right, he fears the police will soon target him as a prime suspect. He asks Megan and Michael to investigate.

As they dig deeper, they unearth shocking links that expose the dark underbelly of a city where widespread fraud, illegal drug trafficking, and a sense of entitlement defy the system. Elusive conspirators up the stakes and threaten to block their efforts at any cost.

How can Megan and Michael ensure their trust in each other is enough to save them on a perilous quest for a cold-blooded killer?