Christine Simolke joins us again to tell us more about her novel, CHILDREN OF ITALY, based on her family’s immigration to the United States in the early 20th century. In addition to entertaining readers, Simolke believes that historical fiction is a way to help them understand what it was like to live in the past. When writing, she starts with her characters. The plot and setting evolve from what they want. She is working on the sequel to CHILDREN OF ITALY, which starts in 1939 and follows the family's story for several years.

Simolke is a retired teacher, active in non-profit work in her community, and an avid traveler who lives in North Carolina with her husband.

Q: Your historical fiction novel, CHILDREN OF ITALY, is based on your family’s immigration to the United States. Reviewers say, it has a "Love story, secrets, and even a bit of suspense!" and that it’s “a page turner.” Do you believe that historical fiction is an effective way to teach about the past, and in your case, about immigration?

Christine Simolke:  For those who enjoy fiction, in my opinion, it’s a great way to learn about and understand the people/society/political climate of a past time period. Good writers of historical fiction do a great deal of research to embed their readers in surroundings that reflect the past to help them understand what it was like to live in those times. When writing CHILDREN OF ITALY, I wanted my readers to be immersed in the culture and feelings of an immigrant in America in the 1920’s.

Christine Simolke:  My favorite recently written historical novel is The Light Between Oceans. My favorite authors of historical fiction are John Steinbeck, the Bronte sisters, and Willa Cather. I agree, Shogun is great!

Q: Reviewers of CHILDREN OF ITALY are eagerly waiting for a follow-on story. Will it bring the reader into today’s world of immigration?

Christine Simolke:  Thanks for including that! The continuation of CHILDREN OF ITALY picks up in 1939 when WWII begins with Nazi Germany’s attack on Poland and the US is still two years away from entering the fighting. It will not venture into today’s world of immigration as it will only cover the course of several years.

Q:  A recent reviewer writes that CHILDREN OF ITALY is “relatable to today’s immigration crisis.” Do you agree? How might an historical fiction book such as yours contribute to understand or help the “immigration crisis?”

Christine Simolke:  I think the immigration issues of the past are much the same as during the mass migration of European immigrants in the early 20th century. Though we are a country full of immigrants and their descendants, those entering our country from other lands face discrimination still today. I think if readers of historical fiction can be reminded of the fact that we are all descended from immigrants, they might better understand recent immigrants and be more likely to treat them with respect instead of viewing them as outsiders.

Q: You have traveled extensively. Does travel help you envision stories? When I travelled, it surprised me to learn more about what it meant to be an American.

Christine Simolke:  Yes, I think that meeting other people and appreciating other cultures is a great inspiration for writing; and I agree with you, it has also shown me that our country, with all of its struggles, is, in my opinion, the greatest place to live. I’m very proud and thankful to be an American.

Q: When you write your stories, what comes first: plot, character, or setting?

Christine Simolke:  Character is my top consideration. I think about what I want my characters to think/feel/dream. The plot and setting evolve from their desires.

Q:  Reviewers tout your characters: “these characters had me hooked from the very beginning” and are “richly developed characters.” Would they have behaved differently in a different setting, i.e., if they had immigrated to Russia, for example? How influential was the setting to the actions of your characters?

Christine Simolke:  The setting of early 20th century America and Italian culture are very central to the story in CHILDREN OF ITALY. The characters are very influenced by the expectations of their families and their place in society. But that being said, I think being an immigrant to any country would have many of the same inherent challenges. I think readers of any nationality could relate to the plight of these immigrants as their feelings of isolation and discrimination are something we’ve all felt in one form or another.

Q: You’ve also written an historical middle grade novel. What can you tell us about it?

Christine Simolke:  My middle grade novel has not been published yet, but it is also about an Italian-American family. It takes place in 1970 and is about the terrorization of one immigrant family by the KKK in a small southern town.

Q: What will be your next publication? Do you plan to write any contemporary fiction?

Christine Simolke:  I hope to finish my novel that continues the story of the Falconi family of CHILDREN OF ITALY. Whether it will be published or not, I can only hope. I love writing historical fiction and don’t see myself writing contemporary fiction anytime soon.

Q: Tell us about Christine Simolke. What do you like to do when you’re not writing? Have you travelled somewhere exciting recently?

Christine Simolke:  I am a retired teacher. I’m active in non-profit work in our community, and I love to read, cook, and exercise at our YMCA. My husband and I haven’t traveled recently, other than to NYC and the North Carolina coast to visit our sons. I am really having fun doing author visits with book clubs who have read CHILDREN OF ITALY. If any of your readers would like to have me do an author visit with their book club, they can contact me at csimolke@charter.net. I will be glad to Skype if they aren’t within driving distance. I really enjoy connecting with readers and other writers.

Thank you so much for the interview!

Christine Simolke is the granddaughter of Italian immigrants. She was inspired by her  grandmother’s life story to write a novel of the immigrant experience. She has traveled to countries all over the world and is thankful that her ancestors chose to settle in the United States. She is a former language arts teacher and currently resides in North Carolina with her husband. They are the parents of two wonderful young men. When she is not writing, she's active in non-profit work.

The idea for her book, CHILDREN OF ITALY was formed many years ago when she wrote a research paper in graduate school based on an interview with her grandmother, Giovanna and stories her great aunt, Evelina told her. Her grandmother and her family immigrated from Italy to America in the 1920's, and Christine and her family were always fascinated by the stories of their voyage to America and their early life in the United States. Their tale of hope, struggle, perseverance and love of family has been an inspiration to all of the generations after them.

About CHILDREN OF ITALY

Against the backdrop of the early 20th century, as millions of immigrants pour through the 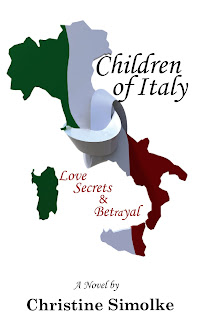 doors of Ellis Island in search of the American Dream, Italian immigrant, Luigi Falconi, works as a coal miner to carve out what he hopes will be a better life for his family, who remain in Italy. Soon he will be with them again, but a dark cloud threatens to ruin all he has struggled to accomplish. After twelve years apart, his wife, and three daughters leave Italy to join him in America. Luigi looks forward to their arrival with anticipation, but first he must end his affair with the troubled Isolde, who cannot accept that he has never loved her. Luigi is all she has, and she plots to keep him.

While on board the SS Roma as it sails to Ellis Island, Luigi’s eldest daughter, Giovanna, begins a romance with Alessandro, a dashing member of the crew. When he immigrates to America a short time after their voyage, intent on reuniting with her, she and her family have vanished. As the Falconi family struggles to assimilate in America, Alessandro perseveres in his hunt for Giovanna. His search intersects with the bitter Isolde’s efforts to win Luigi back, with heartbreaking and surprising consequences for all of them.