T.T. Michael wrote FIRE WAR, a political thriller he’s been mulling over for a long time, because of what’s been happening in the world today. He and his reviewers believe it’s a credible futuristic story because it could happen, given today’s terrorist attacks such as what occurred in Paris. He creates suspense by actually choosing real world situations.

In the following interview, Mr. Michael (wink, wink) shares a secret with us about his real identity. What’s most relevant is that he has written and published four detective mysteries under a different name. He is currently working on FIRE WAR II: Treason. When he’s not writing or working as a financial manager, he enjoys spending time with his wife and four children going to movies and sporting events—in particular, Chicago Whitesox and Dallas Cowboys games.

Q: When I read your biography, I was interested to find that you have been a financial manager at a car dealership for ten years. How or why did you come to write a futuristic dystopian thriller, FIRE WAR?

T.T. Michael: I have actually been a finance manager for 23 years but at my current place of employment for the last 12.

This is a story that I've had in my head for a very long time and with what's happening in the world today I just felt it was time to put it on paper. The book was published October 3rd and one of the stories had a terrorist attack in Paris. One month before the actual attack happened. It's kind of an eerie coincidence and when it happened I got a shiver up my spine.

Q: Reviewers praise FIRE WAR as a “Powerful and thought provoking futuristic thriller!” What makes it thought provoking? Did you intend to deliver a message or did you write it strictly as a thriller?

T.T. Michael: What makes FIRE WAR thought provoking is that this story could actually happen. A lot of the story is based off what could happen if the world keeps going on the path that it's currently on. In the news today you see Donald Trump talking about shutting down the borders. Building a fence. One of my plot points is that we do shut down the borders but to a bigger extreme. We actually join forces with Canada and Mexico to make one Super Country. The U.C.S.A. or United Continental States of America. We then shut down the border to that very large country.

I can't honestly say I intended on delivering a message per say but I can see the message that I put out there. When I started this story I had a completely different plot in mind but it was like the story took on a mind of its own. It grew into something bigger than I could've imagined.

Q: What do you believe are the key attributes of a thriller? How do you develop suspense?

T.T. Michael: The key attributes of a thriller are actually narrowed down to one thing in my eyes. That one thing is…Plausibility. If a reader can actually see what they're reading as something that could happen to them they get intrigued and want to see how the story comes out. I had one reader actually email me (I put my web page at the end of the book) and tell me that he put himself into every situation that my main character, Anthony Jackson, was put in. He told me how he would've reacted in each of those situations.

I develop suspense by using real world situations. Real world decisions would have to be made and sometimes readers will agree with Jackson's decisions and sometimes they'll scream "You idiot" to him. That's the real world because Jackson is very real in my mind and he's going to make mistakes along the way and there will be consequences. Those consequences can be right away or later down the road. Just like in real life.

Q: Reviewers discuss the plot and thriller part of FIRE WAR over and over. Would you say it is more plot-driven than character-driven? Did you conceive of the plot first and create your protagonist to fit into it?

T.T. Michael:  I think FIRE WAR is both plot and character-driven. You can see the world around Sgt. Jackson and you can feel what he feels, see what he sees, and experience every part of his life as it happens. But, at the same time you can experience what's happening outside of his little world too. It's a very realistic book in that way. I conceived the plot many years ago but didn't know how I wanted to play it out. As I said earlier, the story you read today isn't the story I had in mind at all. It really took on a life of its own after the very first few pages were written. Originally I had more action/violence in mind but that story fizzled fast because it just stopped feeling "real" to me and I wanted a "real" story.

Q: How important is the concept of villain versus hero to tell your story? Do you need a villain to create a hero?

Do you need villains to have heroes? Yes I think you do; otherwise you wouldn't need that hero.

T.T. Michael:  I created credibility in this story because it could truly happen. Terrorists could attack the U.S. again and cause all these dominoes to fall into place. This story was all too real to me in some senses because I actually pictured these things happening and how the people of the world would respond.

I truly believe credibility is very important to readers of this genre, especially.

Q: Did you base your protagonist on a real person or is he entirely fictional?

T.T. Michael:  Gunnery Sergeant Anthony Jackson is all fiction but his thoughts and actions are based on how I would think and react to the situations I put him in.

Q:  How helpful is humor to develop your characters or tell your story?

Q: What’s next? Will you write a sequel? What else have you written? Did you always want to become an author?

T.T. Michael:  I am currently writing FIRE WAR II: Treason. It continues the story from the first FIRE WAR and this is where you will see Sgt. Jackson at his finest. Not that you didn't in the first one but you'll see a whole different side that you may or may not have figured out in FIRE WAR.

I've written 4 other books. They're all murder mysteries.

I can't say that I always wanted to be an author but I've always liked writing fiction. I remember when I was in the eighth grade and my teacher gave me an assignment to write a fictional story and it had to be 3 pages long minimum. While kids in my class turned in 3 page projects mine was over 30 pages long and I felt like I still wasn't done with it but it was due so I put an ending on it and turned it in. Of course I got an A.

Q: Tell us about T.T. Michael. What do you like to do when you’re not writing or working?

T.T. Michael:  When I'm not writing or working there's very little time in my life but I truly just enjoy my wife and 4 kids. We love to go to movies and sporting events, i.e., Chicago Whitesox games and Dallas Cowboys games.

There is one thing about T.T. Michael that a lot people don't know and I am going to share it with you right now. This is the first time outside friends and family that this is told but here goes…T.T. Michael isn't my real name. It is in one sense. Michael is my middle name. My real name is Todd M. Thiede. After careful consideration I used a pseudonym for writing FIRE WAR because I polled some readers of my murder mysteries and they said that it would confuse some people that like my murder mysteries to pick up a book by me and not have it follow that genre. Some even said they would be mad and give a bad review because it wasn't what they would expect.
One other thing I've done for the last few years that I've truly enjoyed is this…I give a scholarship at my high school to one deserving kid. It's the Todd M. Thiede creative writing scholarship and all the kid has to is write a story. Any story whether it be a true one or fiction. I just want to hear the student’s voice. In the last few years I've read some great stories and I even still mentor one of the recipients while they continue writing in college and maybe even beyond. I hope way beyond.

Perhaps you wouldn't characterize the Finance Manager of your local automobile dealership as an Amazon best-selling author--until you get to know T.T. Michael. He has worked for the past decade at a Toyota Dealership in Illinois, but he is in the driver's seat as the writer of, Fire War, a political thriller set in the year 2076. See what happens when the United States, Canada, and Mexico all join forces to make one super country. See more about him and his book Fire War at www.ttmichael.com 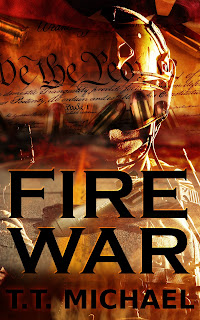 Late in the 21st century, the United Continental States of America (or UCSA), comprising the former USA, Canada and Mexico, is running smoothly: unemployment has been all but eradicated, terrorism is quashed in the country, and internal dissent diminishes by the day. Most people thank President Meyers for this. Many can no longer remember when there was last an election, but as long as he keeps the country safe from the terrorist group Hariq Jihad (‘Fire War’), this seems a small price to pay.

Gunnery Sergeant Anthony Jackson is the model Marine: highly trained, absolutely efficient, and unquestioningly dedicated to his country. The only thing he can conceive of putting before his nation is his family, his wife Courtney and two daughters Maya and MacKenzie. Conscripted into the personal security detail of President Meyers, he begins to get glimpses that not everyone is as content with the current situation as he is, but attributes this to terrorist agitation and fringe lunacy. When his older daughter Maya begins to question the creeping erosion of personal liberties and the revoking of democratic rights, however, he begins to fear for her safety, as well as his own and that of his family. In a climate in which entire families disappear due to minor offenses, one can’t be too careful.

The tensions between liberty and safety, between family and country, will force Jackson to rethink all his beliefs, and lead to a collision with the system he has dedicated his life to serving.

FIRE WAR is a suspenseful, gripping and unnerving examination of the paradoxes of power, the price of liberty, and the dictates of conscience. The world you live in will never look the same again.