CHECK IT OUT: Character Unveils Cover

My protagonist Brynn Bancroft is here today to unveil the cover of her second mystery, LANDSCAPE FOR MURDER, scheduled for release Nov. 5 and available for pre-order.

Brynn Bancroft evolved from the Jillian Hillcrest mysteries where she served as Chief Financial Officer at a small biotech company. For a variety of reasons, including her own divorce, discovery of her affair with the CEO, and her disturbing past, she decided to leave her position and agreed to help manage her ex-husband's winery.

As the protagonist in HILLTOP SUNSET, Brynn begins to shed her past and her behavior of protecting herself by blocking emotions. We watch her transition from a shallow uncaring person to someone who starts to understand the emotions of friendship and love.

At the same time, much like Jillian—who occasionally shows up in the Brynn Bancroft mysteries—Brynn, too, attracts mystery and murders as she grows to enjoy life at her ex-husband’s Hilltop Sunset Winery.

In the following brief interview, she offers some hints about how she becomes involved in LANDSCAPE FOR MURDER.

Q: So tell us about this mystery. When we left you at the end of HILLTOP SUNSET you were seriously considering abandoning your career as Chief Financial Officer and joining your ex-husband to manage a new winery. How did you become involved in another murder?
Brynn Bancroft: Yes, I definitely opted to help Liam develop his winery instead of being a CFO. I find it more enjoyable and fulfilling than discussing the financials of a public company.

And I am particularly excited about this great new killer cabernet we’re launching.

At the same time, I started to paint again. It's quite therapeutic. And that’s how I met a new friend—while painting a landscape together with him.  I was waiting for him to join me one day when a police car stopped and told me about his murder and asked me to come to the station to tell them what I knew.

Q: And just what did you know about your murdered artist friend?
Brynn Bancroft: Not much. I was dumbfounded! He was a gentle elderly gentleman who enjoyed painting—and old Hollywood movies. He was not wealthy nor was he offensive. I couldn’t imagine why someone would want to murder him.

I was aware, however, that he was searching for his missing daughter who had disappeared as a teenager some 30 years earlier.

Q: What about your ex-husband, Liam? How are you two getting along now?
Brynn Bancroft: Well, I’m not sure what’s happening between Liam and me. He is still working at his job and only visits the winery occasionally, so I manage it myself along with our winemaker. But, I admit, I always look forward to Liam’s visits. I feel, well, safer and more at ease when he’s around. But I just don’t know what’s going to happen with us. He seems to think of me as his business partner only. Which I guess is OK. Maybe. But sometimes, I yearn for more. 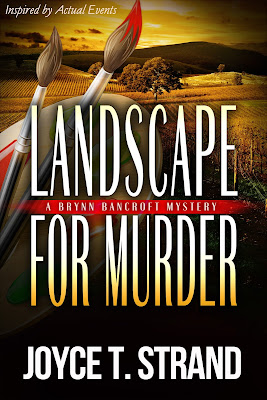 About LANDSCAPE FOR MURDER: A BRYNN BANCROFT MYSTERY (2)

A friend’s murder. An unconnected cast of suspects, including the victim’s missing adult daughter. As if that wasn’t enough, Brynn Bancroft’s winery has been broken into. Can she deal with her co-owner ex and help the police find her friend’s murder so she can finally overcome her own troubled past and enjoy family life with her teenage ward?

Available for pre-orders now. For release on November 5, 2015.


The sheriff’s patrol car annoyed Brynn Bancroft when it stopped in the narrow curve of the road next to her, and its driver put down his window. She had traveled more than an hour to her favorite meadow where she could sit at her easel and paint in solitude without interruption. She had just gotten started. She regretted not having walked further into the muddy field.
The uniformed driver, whose sandy hair was cut close, removed his dark glasses and said, “Hello. I’m Deputy Hallis from the Marin County Sheriff’s Office. Sorry to hear about your friend.”
Brynn turned to face him, confused. She didn’t know him, nor had anything recently happened to any of her friends, as far as she knew.
He must have detected bewilderment on her face. He said, “Your artist friend. Haven’t I seen the two of you here painting when I’ve driven by on my way to town?”
Although perplexed by the interruption, Brynn understood that the intruder was referring to a fellow local artist she had befriended on former painting trips to the area. The two of them had sat together in this same spot.
Brynn said, “Why, yes, if you mean Kenneth Sterling. We often painted together. Is there a problem?”
“Yes, ma’am. Can you tell me your name, please? And where you are from?”
Brynn’s concern for her friend overcame her annoyance, and she answered, “My name is Brynn Bancroft. My ex-husband and I own the Hilltop Sunset Winery in Sonoma.”
“I see. And you came over here to paint with Mr. Sterling?”
“Yes. What is this about?”
The deputy hesitated briefly and then said, “I’m afraid your friend is dead.”

In addition to the current-day mysteries, Strand published THE JUDGE'S STORY in June 2015 a historical mystery set in a small California town (Ventura) in 1939 that features a California Superior Court Judge.

Although fiction, the Jillian Hillcrest and Brynn Bancroft mysteries are inspired by real California cases. She based the protagonist in THE JUDGE'S STORY, also fiction, on the memoir of a California Superior Court Judge (1941).

Much like her protagonist, Jillian Hillcrest, Strand headed corporate communications at several biotech and high-tech companies in California’s Silicon Valley for more than 25 years. Today, in addition to creating mysteries, Strand writes and publishes a blog, Strand’s Simply Tips, is a writer for a regional wine magazine, and is working on the third Brynn Bancroft mystery, to be published in November 2016.

Strand lives with her two cats and collection of cow statuary in Southern California, and seeks out and attends as many Broadway musicals and other stage plays as she can.

A mystery set in wine country pitting financial exec Brynn Bancroft against a determined stalker, a troubled love interest, and a haunting past.