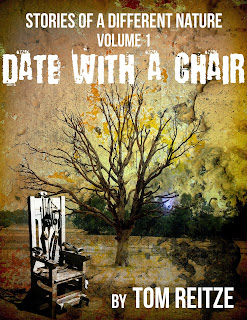 Who is Tom Reitze? What kinds of  stories does he write?

Tom Reitze wants to tantalize us by easing us into his writings one short story at a time in a collection he calls STORIES OF A DIFFERENT NATURE. He at least lets us know that he doesn’t write in a specific genre. Rather he says his “genre is somewhat like a tossed salad.”

He has written a book, but he’s holding that back, too. For now, he just wants to let you know about his first short story in his new collection, just published, titled DATE WITH A CHAIR. He’s only telling us that he didn't write it "to produce joy and happiness", but it might stir some controversy.

When he’s ready, he’ll let us know about his next story in our series of interviews. Until then, he’s revealing himself by responding to one question at a time.

Q: Before I ask you specifically about your first short story, can you tell us what caused you to decide to write and release a series of short stories? Are they related to each other? What can you tell us about them in general? What genre are they?

Tom Reitze: About five or six years ago I wrote a full-length book that I desperately want to publish. I wanted to present my personal beliefs, which are based on logic and those developed by simply living, as a contrast against those that people have by accepting unbending doctrine. I hope I did a good job because it took four years to complete the book. But I will say it was no task of fatigue. I loved every minute writing it. It would take a big effort to publish it though, so as a first foray into the business I thought I would start with something smaller. I’ve found writing short stories to be very enjoyable. So once I started I kept going.

The stories are not really related. But many of them do have a common thread of the supernatural. But they vary in nature from the series to the comical.

There are different styles of writing that I use, and I cross a wide range of subject matter. I think you will see that as more of the stories are released. I enjoy writing humorous material, but sometimes I’m pulled towards darker side of things. I think it depends on my mood, or perhaps some gray event that stirs my thought process .

Ha! As to genre, they’re splattered all over the place. I think I would get bored not letting my mind wander to any place it wants to. I think my genre is somewhat like a tossed salad.

Q: Do you believe paranormal fiction offers a useful vehicle to both tell your story and to deliver message or educate your readers? Or do you use it basically to make your story entertaining?

Tom Reitze: Yes I think that is true, paranormal fiction is a good method for conveying information. I’m not sure I believe in it, but I do think it is a good way to put some of my ideas out in the open. Many people are interested in the subject; maybe it will draw them to my work. Let the reader decide if what is presented is viable. I never want to present myself as understanding everything. I believe everyone’s opinion counts.

I think the entertainment value is what most people are looking for in these types of work. I also believe you can use the element of the paranormal to capture peoples attention and have them pay a little bit more attention to the details of the story. That way you can convey some ideas people would overlook otherwise. I think that goes for writing humorous pieces as well. Don't get me wrong, I'm not out to present some great insight I think I have. The stories are often presented as nothing more than what you see. Then there are times I will present some that are more serious. The intent then is to have the reader continue to contemplate the story after the last page is turned. You'll have to wait some time for one of those though. They are somewhat rare.

Q: What can you tell us about your first story, DATE WITH A CHAIR? Will it scare us? Amuse us? Make us happy?

Tom Reitze: This first story is not one I created to produce joy and happiness. Those are coming; don’t worry—along with tales of mystery, the supernatural, sheer craziness, and the power of love and kindness. I think this one will capture your attention in that it’s presented in an unusual location, with a strange juxtaposition between the main characters. A third character enters the scene and muddles the situation even further.

This story may present some controversy. I’m waiting myself to see the reaction to a few of the concepts it presents. Will it scare you? It’s not a deep thriller if that’s what you mean. But I think it is somewhat captivating and I hope people read it freely and with an open mind. I hope people capture the basic proposal that is the support of the story, and it makes them think a bit.

Q: What’s next? Or do you prefer to keep it a secret until it’s ready for release?

Tom Reitze: Well, I like to keep the specifics of what’s next locked in my closet. However, I will say again, my stories cover a wide range of topics. You could find any kind of tale popping up next. There are silly ones, and some I hope that might make the reader sit back and think about things a little differently. I hope people appreciate them, and maybe even allow their minds to be opened by a few of them.

“I am a very opinionated individual and was sure I knew what was wrong with society and how to fix it. I planned to write a series of editorials and bind them into a book. Before I started, I realized no one in the world would give a damn about what this unknown writer had to say. I decided to expose my feelings in the form of fictional stories, something people would be more likely to read.

"My 22 lb. cat, Horus agrees. He is very opinionated as well.

"I am contradictory. I will present one idea at one time, and then write another story that presents the opposite concepts. I like to believe I am a person willing to listen to and consider both sides of an issue. Some of my writing is serious, some of it is supernatural in nature, and some of it is humorous (I hope).”

About STORIES OF A DIFFERENT NATURE by Tom Reitze

“STORIES OF A DIFFERENT NATURE is my first foray into eBooks. One at a time they will sneak out and onto Amazon over the next several months. There is a novella ready to make a surprise appearance “between the stories” as well. Watch for them. Give them a try. Let me know what you think at dragonflybooksandart.com  and review them on Amazon.

"Horus and I are ready for you to read the stories. I hope you like them.”