Joyce Stewart has published two of the three novels in her “BBQ Trilogy” and plans to release the third book mid-year 2015. These novels focus on relationships, and reviewers tout the realism of her characters and their relationships. Stewart appreciates the value that humor brings to character development and believes in the concept of villains and heroes to bring readers into the plot.

Stewart, known for her poetry, has been writing poetry and short stories for ten years. She describes her approach as “edgy inspirational writings.” She also writes, directs, and produces plays; and is talk show host of YouTube Channel “Brides and Wives.”

Q: One of your reviewers says of THE BBQ: FIREWORKS SPARK that it is a  “great depiction of relationships good, bad or indifferent. At times, I forgot that these were just characters because their story was real life to me.” How did you create such compelling characters? What made them so real? How were you able to depict such real relationships?

Joyce Stewart: My depiction of real characters is an observation of true to life personalities.  They are based on personal references of strangers, friends, co-workers etc. As a writer you are always absorbing life in “Real Time” as you are going about your day to day experiences.  I was able to dig into my reservoir of imagination to combine what I knew and my “Crazy-zany” imagination to create relationships that people could truly identify with.

Q: You are quoted as saying, “I absolutely loved and hated the process of writing this book.”  What was it about the writing process that you disliked? I know that you also write poetry, which do you prefer writing: poetry or novels? Why?

Joyce Stewart: There were portions concerning the editing and research process that were very new to me and not calculated as a new writer, this became my “Achilles’ heel.”  I definitely prefer writing novels!! Writing novels allowed me to go deeper than just the surface and challenged me to be more than one dimensional.  I had to do my homework. Working with a plot and setting required location, description; and it was very time consuming but I would not trade it for poetry.

Q: Does the concept of “villains vs heroes” apply to The BBQ Series? What makes a good villain?

Joyce Stewart: Absolutely, it applies to the BBQ Series.  I believe all stories must have good and evil plots or characters to bring the readers interest into play.  My concept of a good villain is one that you can say you may know a woman or man just like them.  They must invoke extreme intense feelings.  They are the ones that you long to see get what’s coming to them.

Q: How helpful is humor in developing your character’s relationships?

Joyce Stewart: Humor, for me is crucial as it brings special kindredness and relatability to a character.  This causes a reader to develop an affection for the story and have more personal interest in how things turn out.

Q: How did you come up with the title The BBQ series and FIREWORKS SPARKS? (Don’t tell us if it’s a plot spoiler!)

Joyce Stewart: I chose this title because it represented something so simple but so engaging simultaneously in regards to the nature or setting of a BBQ.  It didn’t become a series until I came to the last chapter.  I just couldn’t let it go at that point.

Q: What do you consider to be the most important elements of a compelling story?

Joyce Stewart: Choosing characters that are loveable but imperfect, or villainous, but not heartless.  The story line must keep you on the edge chapter after chapter. Having a plot that can be believable without being predictable.

Q: How helpful are back-story and setting to telling your story? Could your book have occurred anywhere at any time?

Joyce Stewart: For me, they create a beneficial narrative that allows the reader to understand the characters persona.  The BBQ, I feel is more for today’s contemporary woman but it is certainly not limited to this era.

Q: Do you develop your stories from an outline and stick to it; or do your characters push you around?

Joyce Stewart: I make outlines and then make adjustments as I develop my characters.

Joyce Stewart: I’m writing the final volume three as book two launched last year, February 14, 2014 – THE BBQ: LOVER'S HOLIDAY.  I will be completing the trilogy around Memorial Day.  I have many other books on my desktop including a series called “Here Comes the Bride” about five friends and their journey of love relationships.  I also have a book that I will be working on called “My wife, my mistress.”

Q: Tell us about Joyce Stewart. What do you like to do when you’re not writing?

Joyce Stewart: I love to teach and mentor women.  I’m very active in my church and also am writing, directing and producing plays.

Joyce C. Stewart, known for her poetry, plays, talk show host of YouTube Channel “Brides and Wives” and founder of The Love Business, has been a mentor, wise counsel to men and women needing a helping hand in the area of relationships especially in the love category. It is no wonder that she delves effortlessly into her “Edgy Christian love stories” which have been called captivating, realistic and teachable tools to use in everyday dating situations. Joyce uses her sense of humor to encourage others to consider their choices and consequences of waiting for the right kind of love - in a teachy but not preachy Christ-Inspired setting. Her first debut in 2012 for the first book, THE BBQ: FIREWORKS SPARK was well received. Since that time, book two THE BBQ: LOVERS HOLIDAY its sequel stirred up even more excitement. Joyce is more than a romance novelist but also travels to do speaking engagements and women conferences (upon request).

Watch for the third book in “The BBQ trilogy” near Memorial Day 2015.

About THE BBQ: FIREWORKS SPARK 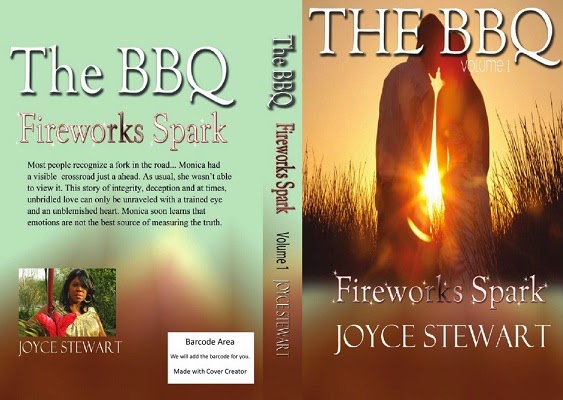 Most people recognize a fork in the road…

Monica had a visible crossroad just up ahead.  As usual, she wasn’t able to view it. Her uncanny ability to turn her peripheral vision on and off at will, distorted her intuitive wisdom; which is why something as simple as a Barbeque with all its queues, clues and even sparks, left her guessing. Life was about to take Monica off the beaten path – right into the world of a Man of Destiny. The only question was “which man” held her future.

This story of integrity, deception and at times, unbridled love can only be unraveled with a trained eye and an unblemished heart. Monica soon learns that emotions are not the best source of measuring the truth.

Monica stood in the kitchen while her mentor, Leslie, talked on the phone to Pastor Richard (Monica’s Godfather). Leslie’s husband, Charles was in the living room glued to the television’s marathon of Law and Order: Special Victims Unit. Monica lived about fifteen minutes away from Leslie and stopped by her house to drop off her birthday gift. The perfume was her favorite, White Linen by Estee Lauder.
By their conversation, it was obvious that Leslie and Richard had discussed things that God showed them about her life.

“Pastor Richard says that he expects to see you today, so please don’t disappoint him.” Though Monica felt like a kid dragging her feet, she hugged Leslie and yelled “Goodbye” to Charles and then began her trip to Pastor Richard’s house.

July 4th Independence Day
Monica sat in traffic impatiently waiting to merge onto the Palisades Parkway. Monica despised any driving that was more than twenty minutes travel, but for the sake of her mentor and Godfather she agreed to go to the Barbeque. July 4th’s well recognized, Grand Finale of all Barbeques of the summer, but to Monica it may well end up being just another religious function. Cars were literally at a standstill and she just took a long sigh. Even her favorite music couldn’t suppress Monica’s inward road rage from asserting itself into her otherwise peaceful personality. Monica swerved her car around a disrespectful man driving a Jeep Cherokee. She saw him coming on her right hand side trying to cut her off to merge onto the Palisades parkway. Monica blocked him and continued on her merry little way. She dialed Leslie.

“Hi, just wanted to let you know that I’m only a few minutes away from crossing into New Jersey, but the traffic is overwhelming.” Monica wished she could just turn back.

“Well dear, sometimes when you’re very close to receiving a breakthrough – you have to do things you don’t always feel comfortable with. You are in an important season in your life Monica,” Leslie said. Leslie felt that Monica needed to remember “the promise”. She was completely aware that Leslie was gifted with wisdom, but at the moment she wasn’t feeling very ‘spiritual’.

Monica was petite; 5’ 3 with an hour glass shape. Her face was attractive with defined cheekbones brown eyes, naturally arched eyebrows and a pronounced nose resembling a Native American woman. Her long hair was worn straight or curly depending on her mood. She debated with herself on what to wear for nearly a week and even today she struggled. Knowing that church folk and strangers would be checking her from head to toe, she had to look her best. ‘It’s funny how men didn’t have that pressure’, she thought ‘They could wear overalls and beat up sneakers—no one would care less.’ However, women had to shine like a peacock. She had a few choices: A halter top denim jean jumpsuit, a beautiful floral ankle length sundress or Baby Phat: leggings with a cute powder blue v- neck mini dress. She decided on the jean jumpsuit since it was cool and sexy combined with 3” cork-heel denim sandals.

About THE BBQ: LOVERS HOLIDAY 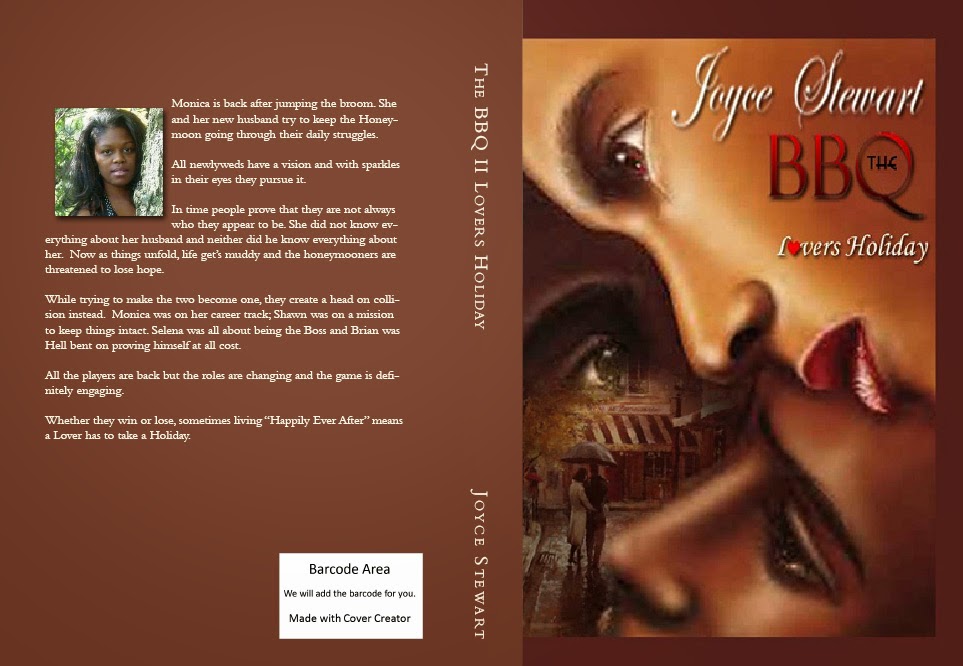 Monica is back after jumping the broom. Monica and her new husband try to keep the honeymoon going in their day to struggles. All newlyweds have a vision and with sparkles in their eyes they pursue it. In time people prove that they are not always who they appear to be. She did not know everything about her husband and neither did he know everything about her.
Now as things unfold life get’s muddy and the honeymooners are threatened to lose hope. While trying to make the two become one they create a head on collision instead.

Monica was on her career track; Shawn was on a mission to keep things intact. Selena was all about being the Boss and Brian was Hell bent on proving himself at all cost.

All the players are back but the roles are changing and the game is definitely engaging. God makes promise(s) but it’s up to Monica and Shawn to meet His requirements.

Whether they win or lose, sometimes living “Happily Ever After” means a Lover has to take a Holiday.