Ryan Leone’s WASTING TALENT, a novel about drug addiction, is described by reviewers as “intense” and “captivating and real.” Reviewers also say that it is a book that “stays with you.” Leone brings his own experience with heroin addiction to the novel, and describes writing it as a "therapeutic experience" and "vicarious escape."

Despite a history of drug addiction, Leone has always been able to successfully return to writing and has had several poems and short stories published. Today he is off  drugs and lives in Los Angeles with his photographer fiancé. He is working on a second novel about “lucid dreaming and prison,” which he claims will be more realistic than WASTING TALENT.

Q: Despite some serious interruptions in your life, you have always pursued writing with some success. What makes you write? What drove you to write your latest novel WASTING TALENT?

Ryan Leone: I started writing poetry and short stories while I was in high school. It was always an outlet for me; if I was angry I’d write a story and feel better. I ended up getting some stuff published early on and it was encouraging enough to make me want to pursue a writing career as I got older. I had a pretty nasty spell with heroin addiction. I ended up going to federal prison for four years and I used the time to write my first novel about my experiences with addiction. Writing offered a form of vicarious escape and solace while I was in prison. I wrote for five hours each day and I completed a lot of material.

Q: Reviewers seem to agree that WASTING TALENT is “intense” and the “darkest story I’ve ever read.” Others claim it’s their “new favorite book” and “captivating and real.” Did you write WASTING TALENT to entertain, educate, and/or deliver a message?

Ryan Leone: I don’t know what I set out to do when I wrote it. I knew that I had been through some indelible life experiences that would make a good story but the themes and messages didn’t reveal themselves until the end. It was a therapeutic experience for me because it allowed me to internalize the horrible things I had been through and gain some clarity. In 2009, when I started writing this book, it was en vogue to write literary/genre novels, so I was trying to do that. A lot of the straight literary novels out there are incredibly boring because they aren’t plot-driven. There is plenty of subtext in my book but I wanted to make sure that the reader was entertained the entire time.

Q:  How important is humor to telling your story?  Many of the reviewers of WASTING TALENT mention it.

Ryan Leone: I address humor in the epilogue: “…it’s the only functioning device they have left to deflect sensitivity.”

I was talking about how drug addicts use humor to comfort themselves. I made the novel darkly satirical because that’s the way addicts deal with the insanity that’s happening around them. When I was an addict I found humor in everything, it didn’t matter that I was in and out of jails or that people were dying around me. A big commonality between addicts is the way they use humor as a coping mechanism after all of their other emotional responses have been stripped away. It was an important part of the story because it made it more authentic and helped readers get through some pretty awful imagery.

Q: Is the concept of villain vs hero important to telling your story?

Ryan Leone: I tried to make a really memorable villain with Mike Virgin. But what I think is more interesting is that the hero of my story becomes less and less of a hero as the novel moves forward. When you’re on drugs your self-worth deteriorates and you get to a point where you legitimately hate yourself. I wanted the protagonist to start having things about him that the readers found deplorable. In a sense, he becomes just as much of a villain internally and externally as Mike Virgin, forcing the reader to choose the lesser of two evils to root for. If I did my job as a writer, you accept Damien for his faults and cheer him on unconditionally. These are the same dynamics you deal with in real life with an addict.

Ryan Leone: I think that character development was one of the deficits in the book. It’s really difficult to create multi-faceted characters that are strung out on heroin. There is this empty stoicism that all of the characters exhibit, essentially they are thin shells of the people they used to be before the drugs. I really admire strong character development in literature. I look at my characters more as caricatures: the stripper, the rave princess, the agent, etc. The characters in my book are mostly based off people I actually knew and a lot of times I didn’t even change the names. I really had an agent named Adam, I had a run in with a guy named Mike Virgin (he died from an overdose a few years back, I read the obituary online), I knew a pregnant stripper, etc. Damien was me in a highly sensationalized way. I wasn’t a rock star but I always fantasized about that lifestyle in my drugged out delusions. The only character that was completely fictionalized is Blair. She’s the girl of my dreams and I ended up meeting her a few months after I completed the manuscript, she is even prettier in person.

Q: WASTING TALENT is described by several reviewers to be “good insight into the world of drugs.” Do you agree? Why?

Ryan Leone: I think I have some real authority on the subject. I shot heroin for a decade and sold everything from cocaine to peyote. I was involved in the festival and rave culture. I spent four years in federal prison on drug charges. I’ve been to rehabs and detoxes all over the country. I’ve experienced almost every facet of the drug world and everything is included in the book except for my experiences in prison.

Q: Who are the most likely readers of WASTING TALENT? Do you consider it an “inspirational” book?

Ryan Leone: I think that the readers of WASTING TALENT are addicts themselves or have been touched by the disease in some way. I didn’t want to romanticize addiction but at the same time I wasn’t trying to give an inspirational message. The themes of the book are about isolation and what it means to be truly alone. I think those themes are pretty universal and can reach people that have no experience with addiction at all. I was just trying to write something with candid authenticity, an honest look at the mistakes I made while I was using. If being honest about addiction conveyed an anti-drug message then I’m all for it. But it wasn’t what I intended.

Q: How helpful is setting to create a background for your story?

Ryan Leone: I think that setting is an incredibly important aspect of any good novel. The setting of WASTING TALENT is California because that’s where I grew up. I think the most lyrical lines of my prose have to do with the natural beauty of California. It was a love letter to a state I’m still very much in love with. I really tried to make atmospheric scenes that would resonate with people that have been there, like the foggy cityscape of San Francisco, the picturesque mountains of Santa Barbara, and the urban decay of Los Angeles.

Q: What’s next? Will we see more novels?

Ryan Leone: I’ve been working on a second novel about lucid dreaming and prison. It’s much more realistic than my first book and it lacks the hyperbole. I have several short stories that I’ve written over the last six years and I think I’m going to polish a few and submit them to literary magazines that I’d like to be included in. The other day I was talking to an agent about optioning my book as a film. I feel that a screenplay writer would try and sanitize my story and give the protagonist redeeming qualities that would mutilate the book’s message. The agent said, “Why don’t you just write the script yourself?” So I might spend some time doing just that.

Q: Tell us about Ryan Leone. What do you like to do for fun when you’re not writing?

Ryan Leone: I recently got engaged to a beautiful professional photographer, she helped conceptualize and shoot the cover for WASTING TALENT. We moved to Los Angeles a couple of years ago and I think it’s the best city in the country. There’s always something to do. We go to a lot of concerts, art shows, and other events. Sometimes on the weekdays, when we’re bored, we go see television shows being filmed. We go hiking, play poker, travel, go to the beach, and spend a lot of time watching movies and reading. I’ve been sober for three years now and I attribute my success to lifting weights, it’s something I picked up in prison and it has been a great addition to my life.

Ryan Leone grew up in Santa Barbara, California. He was expelled from three high schools for drug related offenses, spending much of his teenage years in and out of institutions. Despite these setbacks, he got several poems and short stories published in various anthologies. He was later accepted to a prestigious internship program in Boston for television writing but was quickly asked to leave because of his growing drug problem. He spent the next decade in innumerable jails and rehabs throughout the country. In 2008, after a two year federal investigation, he was indicted for his involvement in an international heroin cartel based out of Mexico. He spent four years in prison and wrote his first novel, WASTING TALENT, during his incarceration. It was published in 2014, and he recently had an essay appear in Beatdom. Rehabilitated and off drugs, Ryan Leone currently resides in Los Angeles with his fiancé. 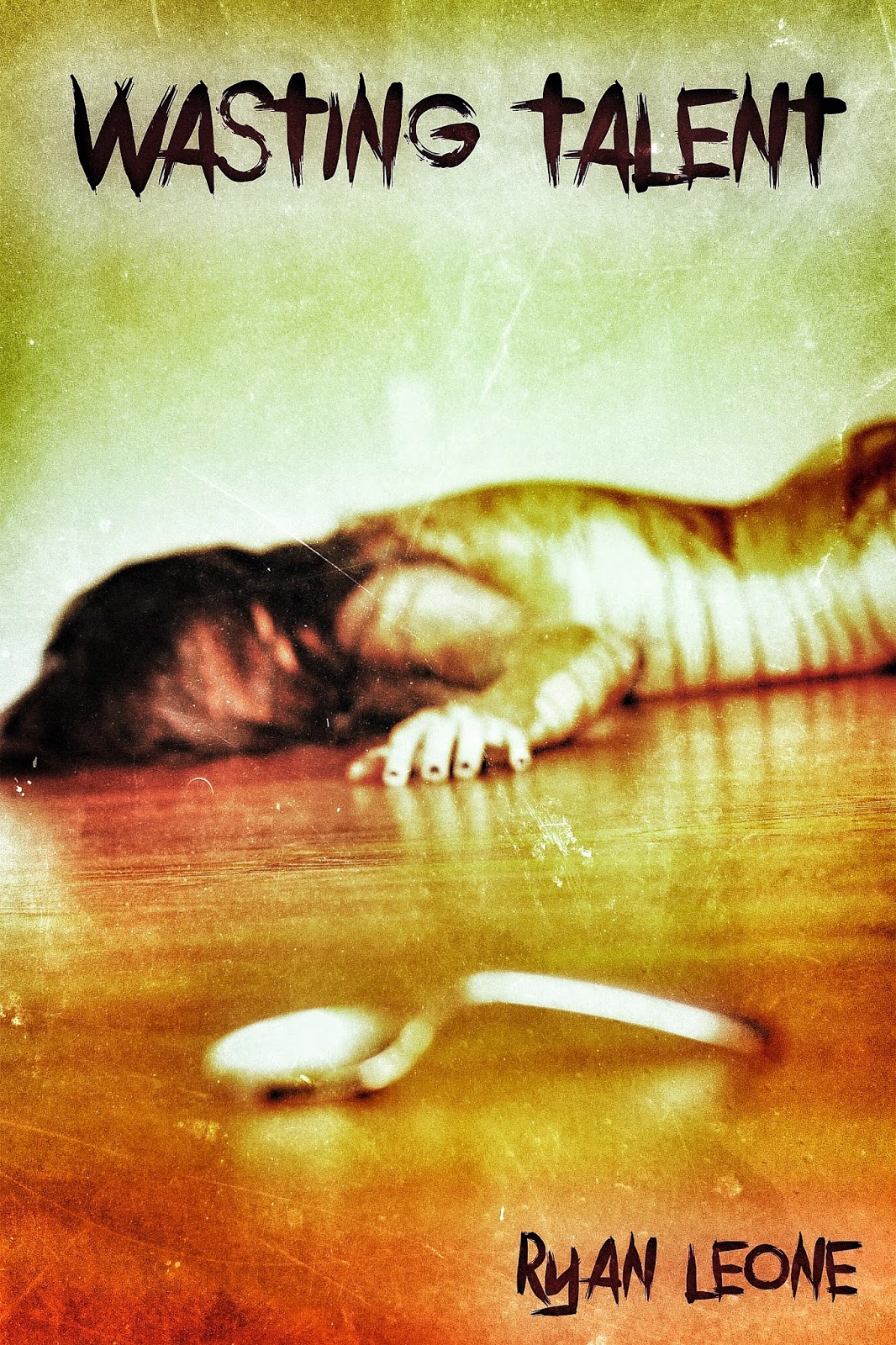 His music could have made Damien Cantwell the star of his generation.

But living fast has its consequences, and Damien soon finds himself spiraling into a dark world full of unfettered debauchery and brutal violence.

The horrors of drug addiction are painted in sharp, biting prose in this novel about throwing away everything and finding that some things are too precious to lose.