Author Caldric Blackwell conceived his latest children’s book, THE BOY WHO COULDN’T CRY WOLF, as part of a project to help children gain self-confidence, but he’s OK with children just enjoying a story about a six-year old werewolf who can’t howl.  Reviewers say it’s a  “A short story beautifully written for children and teaching them how not to worry.”

Blackwell wrote an earlier story titled The Enchanted River Race, and is currently working on a middle grade series called the Young Alchemist series. The first book in this series, The Missing Alchemist, releases on January 20, 2015 and is available now for pre-orders.

Blackwell lives in central California and in addition to writing and reading, enjoys hiking, gardening and playing a variety of string instruments.

Caldric Blackwell: The idea for THE BOY WHO COULDN’T CRY WOLF came to me a few years ago. At the time, I was doing autism research as an undergraduate student. I was part of a project that sought to improve communication skills in children who have autism. During the project, I saw firsthand how important self-confidence is for children, and I came up with the idea of writing about a six-year-old werewolf who lacks self-confidence.

Q: Reviewers say the main character in THE BOY WHO COULDN’T CRY WOLF actually “speaks” to their four-year-old. How were you able to create a character that 3-6 year olds could relate to?

Caldric Blackwell: I was spending a lot of time with toddlers during the writing process, so I think I had a good understanding of the age group. I also shared the story with young readers while finalizing the manuscript, which really gave me insight as to what does and does not work for that age group.

Q: How relevant is believability to create credibility for this age group? Does it even matter?

Caldric Blackwell: I think the necessity of believability really depends on the specific story, rather than the target audience. Readers respond to both outrageous and realistic stories, if they are done well.

Caldric Blackwell: Because a lot of children in this age group can’t read or are just learning to read, illustrations can help them visualize what the text is saying. For THE BOY WHO COULDN’T CRY WOLF, the story came before the illustrations, but as I was writing each page, I was imagining the illustration that would accompany it.

Q: Did you intend to entertain your young readers and/or deliver a message? Reviewers say there is a “positive underlying message about worry.” Did you want to teach children something about themselves?

Caldric Blackwell: I wrote THE BOY WHO COULDN’T CRY WOLF so that young readers would have the opportunity to learn something as well as be entertained. As I mentioned earlier, I created a character who benefits from believing in himself. If the young reader wants to view that as the take-home message, then great. That said, I’m equally happy if the young reader just wants to enjoy a fun story about a young werewolf and not go any deeper than that.

Q: What do you believe are the most important elements of a children’s story?

Caldric Blackwell: I don’t think there is a set of elements needed to make a good children's story. For instance, kids love B. J. Novak’s The Book with No Pictures even though it lacks illustrations. On the flipside, you have Aaron Becker’s Journey, an exceptional children’s book even though it lacks text. At the end of the day, the most important thing is do a good job at whatever approach you decide to take.

Q: Have you written other fiction or non-fiction stories for children and/or adults? What kinds of stories do you like to write?

Caldric Blackwell: I wrote an early chapter book titled The Enchanted River Race, which was published in December 2012. It follows the story of a group of children who race down a magical river on a ship. I like to write stories that stimulate the imagination.

Q: I notice that you’re a musician. Do you believe music can help children to learn, face problems, and/or embrace positive experiences?

Caldric Blackwell: I believe that both listening to music and playing an instrument have many benefits for children. Children’s television shows, such as Sesame Street, certainly recognize this, making songs about everything from saying hello to counting.

Q: What’s next? Will you write more children’s books? Other stories?

Caldric Blackwell: I’m currently working on a middle grade series called the Young Alchemist series. The first book in the series, The Missing Alchemist, comes out January 20, 2015. It’s available for pre-ordering now. I’m excited to share this book with readers because it’s so different from the other books I’ve written.

Q: Tell us about Caldric Blackwell. What do you like to do when you’re not reading or writing?

Caldric Blackwell: As you mentioned earlier, I am a musician. I spend a lot of time learning to play new songs and experimenting with new instruments. I recently got a traditional Chinese instrument called an erhu, and I’ve been working on learning how to play it. I also like to spend time outdoors. I particularly like hiking and rock climbing.

Exposure to a host of great authors while studying at the University of California, Santa Barbara inspired him to begin writing fiction. Although he began writing short stories for adults, he eventually migrated to writing children's books. His debut work is an early chapter book titled The Enchanted River Race. His next release is a picture book, The Boy Who Couldn't Cry Wolf.

Outside of writing, Caldric enjoys hiking, gardening, and playing a variety of string instruments. Caldric currently resides in California.

About THE BOY WHO COULDN’T CRY WOLF 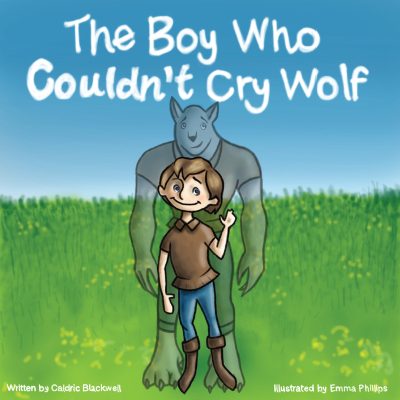 Six-year-old Byron Woodward is a werewolf who can’t howl. Determined not to embarrass himself after being chosen to lead a full-moon ceremony, he embarks on a mission to learn how to howl. He learns a lot about howling during his journey, but more importantly, he learns a valuable lesson about believing in himself.