Sylvia Stein brings us her first novella, CLOSURE, reviewed as “a story about monsters, but not the monsters of typical horror books, these monsters (alcohol and cancer) are reality.” Stein says that she pulled her story partially out of her own childhood and she tells it to inspire readers to hope. Her villain is alcohol, coupled to death and child abuse.

Stein currently lives with her husband and three children. She loves to speak Spanish, and when she’s not writing, to spend time with her family. She has published several short stories, and is currently working on her second novel, “Chasing Clarity.”

Q: What inspired you to write a book about child abuse? Why did you write CLOSURE?

Sylvia Stein: I began writing CLOSURE not as a book about child abuse but to tell a story of a young girl who grows up into a woman and is left with the lingering abuse of her past due to her father.   This book was not only to show the affect of child abuse but also to show how the loss of her mother affects Sara and her father Garrison and how it leads them both into trying to find their way back and if it is even a possibility for them.

Q:  Reviewers tout how real your characters are in CLOSURE. How did you achieve this? Were you able to draw on any actual people?

Sylvia Stein: I am pleased with the Reviews.  I am also happy that the readers have connected with CLOSURE and have found the characters so real.   The main reasons are because I based them off many of those people I knew back home.  These characters of Sara and Garrison are based on them and their experiences and I added the alcoholism because that affected my parents and ultimately ended their marriage, which affected all of us.  It was a bit of what we went through; the only difference was that my father got help eventually and he was never abusive to any of us but for my mother enough was enough. Luckily they were able to become friends and then after getting sober my father lived a happy life with all of us.  He loved all of us, and we all built a great relationship and then sadly in 2005 he passed away.

Q: A story about death, alcoholism, and child abuse could be depressing. Where do you make CLOSURE compelling and inviting to read?

Sylvia Stein: Yes, CLOSURE tackles death, alcoholism and child abuse but I tell the story in a way that the reader is able to follow not only Sara’s Journey but also find out a bit more about Garrison’s as well.   The way I make it compelling and inviting is to have written it with all the emotion that lets the reader not only follow the story but ultimately lets them reach their own empathy for the characters.

Q: How do you create the emotional response felt by many reviewers of CLOSURE?

Sylvia Stein:  As I said CLOSURE is close to my heart because I have known others that have dealt with these issues.   I also added my own struggles within my family in regards to how I felt when someone you love is caught up within the monster that is alcohol and what it does to the entire family.   This is why I believe reviewers are responding in the same way.

Q: How accurate are the attributes of alcoholism and child abuse? Did you need to do research for credibility?

Sylvia Stein: The attributes of alcoholism are accurate because I did the research and I made sure all of it was compelling within the story.

Q: Does the concept of hero vs. villain apply to CLOSURE? If so, who do you consider to be the villain? What attributes contribute to creating an effective villain?

Sylvia Stein: No, for me I do not think I would classify any of the characters as villains.  I would say the villain is alcohol and that is the monster.  Then there is the sadness that is Cancer. However, I do see heroes in the story; for example, Sara’s Aunt Valerie and her Uncle Kyle, Dr. Baker, the AA for Garrison and all the nurses of the Hospice.  And let’s not forget in the end Sara and Garrison became heroes in their own right.

Q: Did you write CLOSURE to entertain readers, to educate them, to deliver a message, to inspire?

Sylvia Stein: I wrote CLOSURE to deliver a message and to inspire their emotions and to ultimately create the faith to hold on to hope.

Q: How relevant or supportive to telling your story was the setting? Could CLOSURE have occurred anywhere at any time?

Sylvia Stein: For the setting I focused on cities that I am familiar with.  I think they could have occurred anywhere.

Sylvia Stein: Well, right now I am working on my second novel called, “Chasing Clarity” which I began writing for my first National Novel Month last November 2013.  It should be out in December and I am also taking my online classes for my Master’s of Creative Writing and English with a concentration in Fiction; I will be graduating next August.

Q: Tell us about Sylvia Stein. What do you like to do when you’re not writing?

Sylvia Stein: I love speaking Spanish.  I was born and raised in Brownsville, Texas to my parents Catarina and Ramon Olivares.  They immigrated from Mexico along with their parents and they provided a better life for all of us.  When I am not writing I love to spend time with my family.  My three children and my husband are my everything. I love having a fun night of being mom and going out to a nice dinner with all of them.  I also love to attend church because my faith is everything too.

Author Sylvia Stein began her path to writing when she joined the Writer’s Group on Linked in 750 in 2012.  She continued her journey by creating short stories, which were published in the Giant tales Anthology series.

While obtaining her Masters degree at Southern New Hampshire University online, author Stein built a solid foundation with her colleagues who encouraged her to continue her writing. That’s when CLOSURE was born.

With the help of her editor CLOSURE grew from a short story to a full novella that Author Stein is excited to share.  CLOSURE is her debut book as a solo writer.   To quote author Stein,  “ This is the first of many to come.” 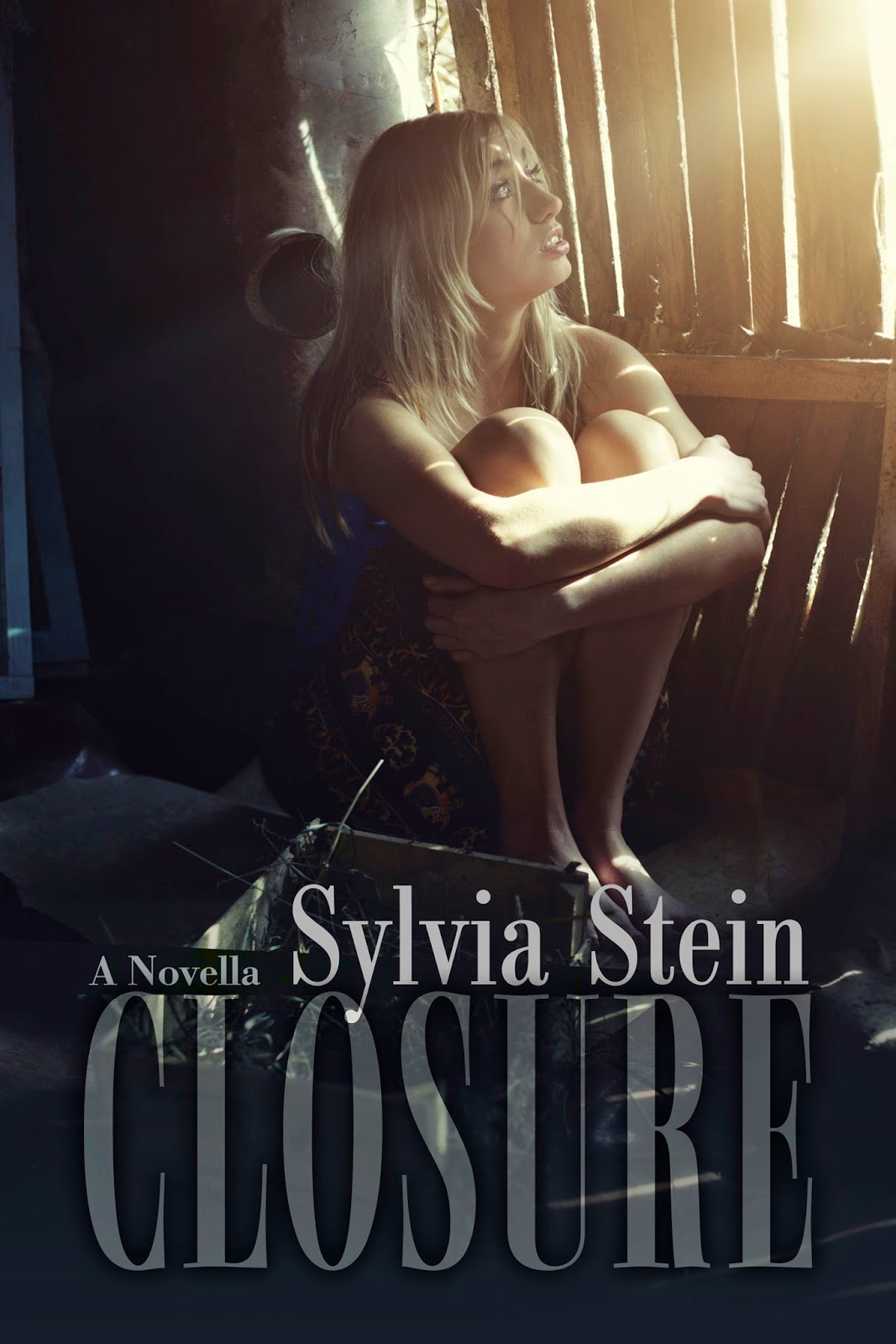 Garrison James had it all.   A beautiful family and one loving home. Together, he and his wife Lila built a successful ranch and construction company. His world changed the day he lost his wife to cancer.  He turned to the bottle and became a monster. Sara, his daughter, tried everything to please him.

After years of abuse, Sara’s aunt visits. She recognizes the abuse and removes Sara. The frail girl begins the delicate journey of finding herself, while struggling to leave her father and the monster behind.

Despite the emotional and mental scars she carried, Sara manages to start a new life. She is finally happy.

A phone call changes everything.

Will Sara continue her new life? Can she face the monster, or will she find closure?

In the dark corner of a room, Sara James waited until the monster fell asleep.

Who was the monster?

It amazed her how much had changed in the few short months since her mother, Lila left. It felt as if it happened over night.

At first, he seemed absent. Then the yelling, drinking, and angry glares erupted whenever she entered the same room as him. Soon, he began calling her names. When she thought things could not get worse, the real abuse began.

Heavy footsteps tromped towards the room. She gulped in jagged breaths and looked to the ceiling while blinking rapidly. A feeble attempt to control her tears.
When hiding from the monster found her, she would replay what she did wrong and how he caught her the time before.

Don’t cry, she reminded herself, that’s how he finds you.

She looked around the once lively home for a sweet reminder of better times. There was a time when the house was surrounded by a beautiful garden. Her and her mother would walk hand in hand and choose which flowers to bring inside. Now, the windows were closed, and the vase that usually held flowers sat empty. No matter where she looked, there was no sign of happiness or life.

The house had become a vessel of sorrow and pain.

Mommy, think of her.

She closed her eyes and forced images of her favorite memories. A brief smile appeared as thoughts reverted her to one of the many times when her mother taught her how to bake cookies.

The memory of her mother distracted Sara from the harsh reality. However, nearly as quick as the memories arrived, they dissipated, and before she knew it, the monster began lashing out.

“Sara! Sara! Where are you?” he screamed.

Realizing she had made noise. Sara covered her mouth and began internally praying.