Mystery author Deborah Garner recently released her second Paige MacKenzie “Cozy No-One-Dies Mystery,” THE MOONGLOW CAFÉ, reviewed as a “terrific blend of mystery, adventure, romance, and humor.” In this mystery, the NYC reporter travels to a small town in Montana to research the area’s sapphire mines, although she is also looking for her “handsome cowboy.” But “stolen sapphires” and “shady characters” soon interrupt her efforts.

When Garner’s not writing, she enjoys photography and hiking with her two dogs.  She loves to travel and divides her time between Wyoming and California. There is definitely another Paige MacKenzie mystery underway, and a few other books as well.

Q: Would you characterize THE MOONGLOW CAFÉ and ABOVE THE BRIDGE as typical mysteries? Cozy mysteries? Who-done-its? What makes them good mysteries?—for those of us who love a good mystery!

Deborah Garner: That's a question I had to think over when I wrote ABOVE THE BRIDGE.  It didn't fall squarely into one single genre, since it mixes history, adventure, mystery and light romance.  But as THE MOONGLOW CAFÉ developed, it became apparent that it most accurately fit as a "Cozy Mystery."  Or, as I tend to joke with cozy diehards who want a murder, it's a "Cozy No-One-Dies Mystery."  The Paige MacKenzie mysteries are clean reads, without any violence or explicit details, involving an amateur sleuth in a small-town setting - all hallmarks of cozies.

Deborah Garner: I think it’s important for readers to identify with a main character.  When that happens, the reader begins to walk in that character’s shoes.  So when Paige's curiosity sends her exploring, the reader follows.  Of course, it needs to be interesting subject matter, so that is tricky.  But that’s all part of how a plot evolves, choosing material that will intrigue the reader.

Q: Both THE MOONGLOW CAFÉ and ABOVE THE BRIDGE are set in small-town areas in the West. How helpful are your chosen settings to telling your stories and creating your characters?

Deborah Garner: I’ve always been fascinated by small towns, which often have unique histories that haven’t made it into the mainstream media. They are perfect settings for mysteries because their isolation sets up opportunities for secrets to be exposed. This type of location lends itself easily to creating characters because rural areas tend to have interesting mannerisms and speech, unlike large cities with more of a melting pot population.

Q: Your reviewers like your characters and say they are “interesting, fleshed-out.” Why do readers engage with Paige MacKenzie? How do you make us care about her and those around her?

Deborah Garner: Paige is very real.  She has good qualities.  She has faults.  She pushes the limits, but still tries to use common sense, usually succeeding in balancing the two.  So I think readers can relate to her.  Surrounding characters are often more eccentric and remind us of people we know or have known in the past.

Q: “The author mixes suspense with a sweet romance” How do you balance romance, humor, mystery, suspense, background information to tell a compelling story? How important is dialogue in this mix?

Deborah Garner: I think dialogue is extremely important.  It provides a means of conveying individual character traits and dropping tidbits of plot information without revealing too much at once. It’s also a great vehicle for balancing different elements of a story. One character might be funny and open in conversation, whereas another is reserved and secretive. Town locals and visitors might have varying accents and speech patterns. Dialogue is a perfect way to give clues to readers, or to create uncertainty, which helps build toward twists as the story unfolds.

Q: How relevant is the concept of “heroes” vs “villains” to your books?

Deborah Garner: It’s funny, I don’t think of any of the characters as villains, though I suppose they are.  I always like them, in spite of their shortcomings.  I see them as people who might have been heroes, but took a wrong turn somewhere along the way in life.  As far as plot development goes, they form a necessary barrier, something that must be overcome in order to solve a mystery.

Q: Do you write your stories to deliver a message, to educate, or for pure entertainment?

Deborah Garner: My intention is entertainment, but I have a fascination with history and make a point of researching carefully, making sure details are accurate.  Often the plot works itself out during the research, rather than the other way around.  So THE MOONGLOW CAFÉ developed around the Yogo sapphire mining history (until Paige found that pesky diary and sent me off in a second direction!) and ABOVE THE BRIDGE was formed around research on gold prospecting.  The travel writer in me also hopes to take readers “to” different areas, providing a bit of armchair travel.

Q: Why did you write a second book with the same character, i.e., the beginning of a series?

Deborah Garner: I didn’t think ABOVE THE BRIDGE would become a series when I wrote it, but Paige wouldn’t leave me alone. She wanted to go to Montana, so I had to follow. She’s bossy that way. It’s not easy to say no to her.

Q: What’s next? Will you continue to write more Paige MacKenzie mysteries?

Deborah Garner: There’s definitely another Paige MacKenzie adventure in the works, which should be out next spring.  She’ll be up to her neck in hot water in that one, literally and figuratively.  I also have a fall release coming up that I haven’t announced yet (Shhh…don’t tell!) that is not a Paige MacKenzie mystery. It’s a standalone that forms a springboard for another series. But Paige will still be around. Like I said, she’s bossy.

Q: Tell us something about Deborah Garner. What do you like to do when you’re not writing?

Deborah Garner: I love photography.  When I’m not writing, I often head out with my camera equipment to track down wildlife or nature shots.  I also love languages and can spend hours studying Italian vocabulary or conjugating German verbs.  Aside from that, you’ll find me being pulled along mountain hiking trails by two canine companions.

About Deborah Garner
Deborah Garner is an accomplished travel writer and photographer with a passion for back roads and secret hideaways. She splits her time between California and Wyoming, dragging one human and two canines with her whenever possible.

About THE MOONGLOW CAFÉ 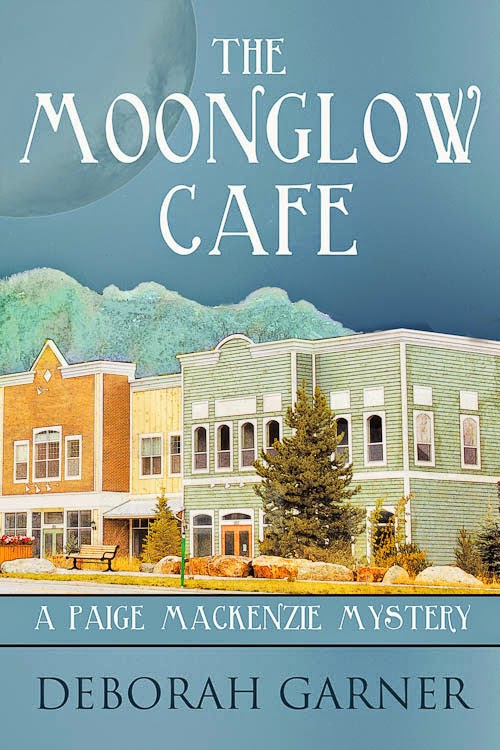 New York reporter Paige MacKenzie has a hidden motive when she heads to the small town of Timberton, Montana. Assigned to research the area's unique Yogo sapphires for the Manhattan Post, she hopes to reconnect romantically with handsome cowboy Jake Norris. The local gem gallery offers the material needed for the article, but the discovery of an old diary, hidden inside the wall of a historic hotel, soon sends her on a detour into the underworld of art and deception.

Each of the town's residents holds a key to untangling more than one long-buried secret, from the hippie chick owner of a new age café to the mute homeless man in the town park. As the worlds of western art and sapphire mining collide, Paige finds herself juggling research, romance and danger. With stolen sapphires and shady characters thrown into the mix, will Paige escape the consequences of her own curiosity?

About ABOVE THE BRIDGE 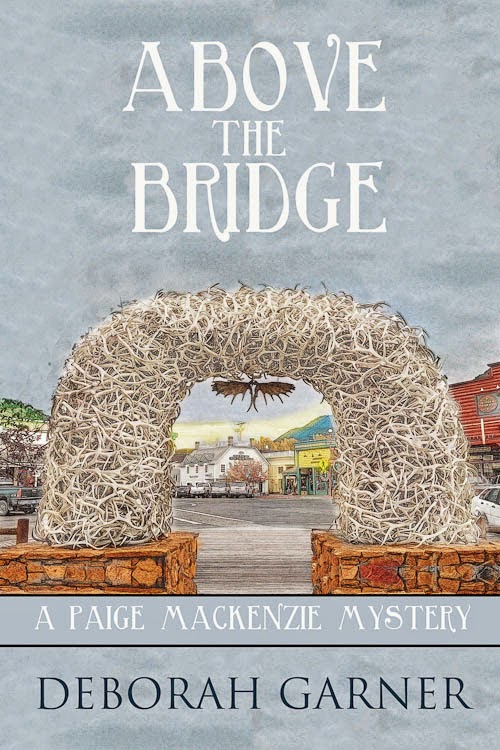 When Paige MacKenzie arrives in Jackson Hole, her only goal is to complete a simple newspaper assignment about the Old West. However, it's not long before her instincts tell her there's more than a basic story to be found in the popular, northwestern Wyoming mountain area. A chance encounter with attractive cowboy Jake Norris soon has Paige chasing a legend of buried treasure, passed down through generations.

From the torn edge of a water-damaged map to the mysterious glow of an antler arch, Paige will follow clues high into the mountainous terrain and deep into Jackson's history. Side-stepping a few shady characters who are also searching for the same hidden reward, she will have to decide who is trustworthy and who is not.

You can find Deborah Garner at: