WHAT THE EXPERTS SAY: Legal Suspense Author A. Wayne Gill


Lawyer A. Wayne Gill has authored THE RUNNER, a Christian legal thriller with “a good, intense storyline” according to reviewers. The first of a series, THE RUNNER features Michael Knight, a lawyer trying to figure out his life.

Head of his own successful law firm, Wayne has experienced the life of an attorney, but he claims his lead character is different from him.  In addition to writing and practicing law, Wayne has received numerous business and humanitarian awards. He is involved in many enterprises and when he has spare time, he prefers spending it with his family or reading.

Wayne Gill: I have always loved to write. My first experience with writing was when I was 6 years old. I entered a poetry contest at my elementary school and ended up winning first place. I wrote the poem on Martin Luther King. He has always been an influence on me not just in writing but also in my overall life.

Q:  THE RUNNER has been described as “A legal thriller filled with excitement and mystery” and also as a novel that “will interest those wishing to intersect the Christian faith with law.” Was it your intent to write a thriller or deliver a message about Christianity?

Wayne Gill:  My intent was for it to be a combination of both. Initially, the concept was to speak about people running away from God. Then when I sat down to outline the book, I wanted to keep the readers enthralled so I went in the route of suspense.

Q: How much of you, the lawyer, is incorporated in Michael Knight?

Wayne Gill:  There certainly are similarities between Michael and myself. However, Michael is a fictional character and his experiences beginning law school are different than mine.

Q: How did you make your characters engaging, especially Michael Knight? Why do readers care about him?

Wayne Gill: I strived to make the characters relate to everyone in some degree. In Michael’s case, I think readers understand where he is coming from and have been through a similar experience that he has.

Q: What makes a good villain? Can you say who is the villain in THE RUNNER?

Wayne Gill:  Villains have to be multi-dimensional. The reader needs to find them relatable and surprising or your story is going to be dull. You know I want the readers to develop their own ideas on the villain.

Wayne Gill: I think the key to creating these elements is by producing these multidimensional characters. Without a strong character, your story just can’t go anywhere.

Q:  Who are your targeted readers and what are they looking for in your books?

Wayne Gill: As a spiritual work of fiction, the Christian community is certainly a “targeted” audience but with that said the messages of THE RUNNER are for everyone. I think that many young adults will find this book extremely relatable to their everyday lives.

Q:  If your book became a movie, who do you envision playing Michael Knight?

Wayne Gill:  I would say Tom Welling. He was the actor on the TV show Smallville. That is the physical appearance I had imagined when creating Michael. He would be an overall good fit for Michael and his small town appeal.

Wayne Gill: Well the tales of Michael Knight have just begun. I am right now in the middle of writing the second book in the Michael Knight series. Michael is in for quite the journey!

Q:  What do you like to do when you’re not practicing law or writing? (although it’s hard to believe that you have time for much else!)

Wayne Gill: Haha!  Yes, I tend to always have a full schedule. In my spare time, I love to read and also spend time with my family.

When he isn’t crafting legal dramas, Wayne Gill serves as CEO and Managing Partner of Gill Law Firm, a law firm with offices in Florida and Georgia that serves some of the top companies in the world, including AT&T, Hilton Hotels Corporation, SunTrust Bank, and JM Family Enterprises.
A husband and father, Wayne is the recipient of numerous civil, professional and humanitarian awards, including Northwood University’s Arthur E. Turner Award for Outstanding Commitment to the Betterment of Mankind. He is also the co-founder of the Oasis Compassion Agency, a ministry to the disadvantaged in the community. THE RUNNER is the first book in the Michael Knight series.
Wayne has been recognized among the 50 Most Powerful Black Professionals in South Florida and the Who’s Who in Black South Florida. He’s received Macy’s Crystal Award for Outstanding Minority Business Advocacy, and he’s received several honors from NMSDC affiliates and the local Bar Associations. In 2002, he received Northwood University’s Arthur E. Turner Excellence in Entrepreneurship Award for Outstanding Commitment to the Betterment of Mankind. He is a board member of the Black Chamber of Commerce of Palm Beach County and Secretary of the Board for The Southern Florida Minority Supplier Development Council.
About THE RUNNER

Welcome to THE RUNNER. 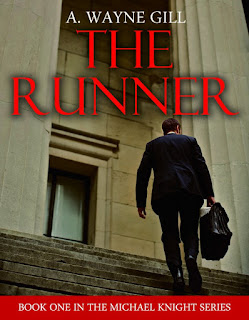 THE RUNNER is the first book in a seven-part series that follows the life of Michael Knight, a young man who is conflicted about his future and who embarks on a long journey of self-discovery. In that sense, Michael is like many of us. I don’t think anyone ever just “arrives.” We all have to go through things in life in order to learn and grow.