WHAT THE EXPERTS SAY: "The 'Me' In Our Work" by Southern Poet and Novelist Damon Ferrell Marbut

Welcome Southern poet and novelist Damon Ferrell Marbut. His first published novel, AWAKE IN THE MAD WORLD, is an entrant for the Pulitzer Prize for Fiction. One reviewer describes it as “a coming of age novel that showcases so many of the issues of twenty and thirty-somethings in America today.”

In the following article, Mr. Marbut explores the significance of "write what you know." He adds the value of comprehending “why” authors write. Why do we do what we do? And why is it relevant that we do so?

Philosophical Sources: The “Me” In Our Work
by Damon Ferrell Marbut

Write what you know.

It’s true. In writing seminars and workshops, or if you weren’t “trained” in this manner, it’s still a common expression that carries with it, in my opinion, considerable importance. Even writers of paranormal, fantasy, etc. can still apply this write what you know standard to a significant portion of their book(s). This is what makes it initially work, I believe: lending a work its validity by giving it your honesty as a writer.

Rarely, though, is the notion of why you are writing what you’re writing the curiosity that follows. Without affording one’s self more than just a series of moments to think this through, the risk exists of condemning the work to stand without enough of the author him/herself. And without knowing exactly why one is writing what one is writing, a book may succeed on some levels but will—and I do not doubt this at all—ultimately fail the author, as it will not be his/her best. Not asking this crucial why will limit the impact of the gift given the reader, which is a person’s work, a creation that may or may not best explain who the person is, as well.

As writers, we don’t ask ourselves this question to doubt why we’re sitting in front of the computer, to doubt our commitment as well as our sacrifices once we’ve hopefully come to term with how we define both. Commitment is sitting there, morning after morning, or night after night, and Sacrifice is something we all must come to terms with. What part of life gets less attention for the work? Finances, exercise, sleep, companionship? What are you willing to sacrifice so that this continues to embody the core of your drive as a complete person and not just a creative person? Or, perhaps you’re writing because it’s an exhilarating activity, or cathartic, or a challenge. Whatever the reason, if you are spending consistent time in front of the computer, there is a deeper meaning beneath it.

“Writers,” no matter how they define themselves, are similarly creating something to represent who they are as a person. Some audiences read to lightly escape the realities of their emotionally-exhausting lives, while others look to be devastated by a beautiful story because it feels incredible to celebrate the fleeting nature of life and beauty and love and human nature and death, all without it being too real. Audiences seek certain books because of how they linger, for how they charge the brain and nerves and surface of the skin. Books should involve full-body reactions and should never be discounted as “guilty pleasures” or “no-brainers.” Audiences select the books they read for a reason. And so as writers, a philosophical obligation exists in us before we commit, before we make the sacrifices, and that obligation manifests itself in the question why. Why am I doing this?

I stopped asking myself this years ago because my writer friends and I moved all around the country and began our own walks toward various creative or academic lights. I used that separation as my excuse to stop asking, and for a long time I didn’t reflect on the reason that conversation had disappeared from my life in general. But today, in thinking of it, it’s simply because I know I cannot stop. I can’t. I gave up law school for this. I lost job opportunities and more financial comfort for this. I made my family think I was ditching them for a notepad, for years, and I was. I became isolated and sometimes drank too much, and then I learned the value of travel and engaging the world around me and started valuing myself because I valued my thoughts and how I expressed them on the page. It’s a life-saving art form, for myself and others like me. I can’t stop because I don’t know any better anymore. I don’t like what my mind wants to do when I’m not writing. I’m never happier than when I’m on a project, which has thankfully been constant for almost ten years now.

And sometimes, I concede, it’s an absolutely terrifying idea to consider who we are as individuals. I remember the sleep-deprivation at work in graduate school after staying up all night reading and writing poems with friends on their couches or mine. But those were the talks we deemed so vital to the understanding of our work, we chose against logic for immediate passion. And when the talks grew so athletic by repetition, or one friend moved away, and then another, we realized there was still that pervasive, churning, all-encompassing why of what we were doing that never left us when we left ourselves. I loved every second of it. I love and need it, still.

My old friends from that moment in our shared lives, when we were developing as creative thinkers, are now my slightly older colleagues. We look back at that era as necessary to where we’ve now landed as individuals in the aftermath of all that romantic and fiery thinking. But we still retain a collective sense of curiosity concerning why we do what we do. The truth is that you, I, we, they are all bound by this obligation as writers to explain ourselves in one way or another, willfully or with a fight. We inject ourselves into our characters and have far more voices speaking on our behalf than we sometimes recognize. Every person, fictitious or real, is seeking to resolve something in their existences. And so, whether we see it or not, our characters tell our story as their creator. I think about that often. I don’t think of my legacy or being respectful to the audience’s desire for my story’s outcome, or how many books I’ll sell or what awards I’ll win.

I consider what truth I’m learning about myself as I write.

AWAKE IN THE MAD WORLD 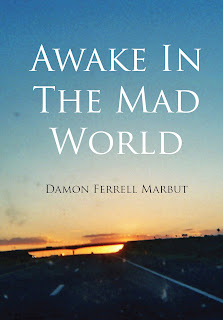 Pete Rattigan is a frustrated young newspaper journalist caught up in uncertainty of the post-graduate “real world”. One night, one seemingly minor encounter sparks a philosophical journey which leads him to discover that in the most beautiful or even cruel moments of life, the power of friendship explains the power of the universe. And that perhaps there is no such thing as chance. With force, humor and sensitivity Damon Ferrell Marbut presents his debut, AWAKE IN THE MAD WORLD, which frees its audience to believe again in the wildness of the young American heart, how it beats just to prove that it will always survive and succeed on its own terms.

After a steady diet of threshold thoughts and staggered steps in and out of the surf, I realized my pants were wetting at the tailored lines, and I decided to make way to my car and drive through Orange Beach just east and visit Perdido Pass briefly so I could let the pants dry and drop off something I’d carried with me a very long time. And due to the most recent move from Midtown to Knox’s, I still had it in the car, the large rock I’d acquired during a skim-boarding-excursion-turned-drinking-bout in high school, a near-decade prior, where I’d fully had that first good fleeting love in a moment with a girl named Tate Bonifay, a memory that was so sweet for such an extended time I couldn’t enforce even the rules of my own heart, to let the past be past, but it was time to forget the patience and allure of that young flash in time, to put the sign of such memory to bed back across the jetties where it had lain for a long time before a heavy youthful heart like mine had come along and told my hands to take it and keep it and maybe later sublimate my resolve.
I drove over the Key bridge against the tumid sun and crept into the narrow parking strip alongside the sand’s reach down toward the rocks’ stretch into the Gulf. The dunes, I could see from the bridge, had blown down from worsening storm systems and beach erosion, and had turned into something only recognizable to locals who had been around enough to see its demise for what it was. I jumped them when they were once twenty feet tall, as Bonifay sprawled up top with Billy and Patrick. She had sat like a football player, confident in her wear, sipping a beer like a mother emancipated from child watch, staring into the sun, curly long hair, a boarder’s attitude. Where had I, that kid, gone, too? The dunes were leveled like tables after a decade and were still beautiful, but lacked the luster of young people sweating in nascent love onto the sand that soon might forget them. I took off again alone on the beach and made it through the seemingly horizontal wind tunnels which tugged my lone body toward the result of what was cresting and crashing down at the shore. If I remembered correctly, the rock had been about ten yards down the rock row in the water, and so without self-doubt and a cigarette stub in my pocket, I negotiated the moist rock pilings down to a fair estimate, and sat on a heavier, dryer monolithic entity in the shade of a generous cloud between me and the sun. I was freezing at that point, but not confused, not in any mood to deliver a eulogy for that which was defecting from my custody, a memory of a beautiful girl I had carried around too long.

Author Bio
Damon Ferrell Marbut is a Southern poet and novelist. Originally from Mobile, Alabama, he now lives and writes in New Orleans, Louisiana, where he is working on a new novel. AWAKE IN THE MAD WORLD, his first published novel, is an entrant for the Pulitzer Prize for Fiction. He is a featured reader at the 10th Annual Saints and Sinners Literary Festival in New Orleans, May 2013.
Links