What the Experts Say: Interview with Suspense/Thriller Author Emerald Barnes


Today we are speaking with Suspense/Thriller Author Emerald Barnes. Emerald has written two books and is an avid blogger, but today she is focusing on Piercing Through the Darkness. This thriller follows a young woman whose memory has suppressed an event. Unfortunately the young woman is taking a class from the professor who she has somehow wronged, and he wants her dead.


Joyce: What inspired you to write about a character with a repressed memory?

Emerald Barnes: While in college, I was taking a psychology class, and we were studying repressed memories and hypnosis.  I was also in search of a story idea for my creative writing course.  I had an idea of a man trying to kill a girl and accusing her of committing a crime she didn’t believe she had committed.  It just kind of hit me in psychology class about how someone would act if they had repressed a memory.  But better than that, how would the victim act if they thought the one with repressed memories didn’t care what they had done.  So, it kind of developed from that train of thought.

Joyce: How did you apply your research/background information to make your story credible?

Emerald Barnes: That’s tough because most people don’t believe that repressed memories are “real.”  How could one person really repress something so horrific?  So, I did research on hypnosis and repressed memories, and I hoped that it all came out correctly when I wrote it.

Joyce: In your opinion, what are the most important elements of a good story?

Emerald Barnes: A good plot, no plot holes, and something that will keep me reading until I can no longer see straight!  I don’t like too much description because I feel like it breaks up intensity of the story, and I always want authors to make me keep guessing at what is going on.

Joyce: When you’re not writing or teaching, what do you do?

Emerald Barnes: When I’m not writing, I am thinking about writing.

Seriously though, you can find me being wrestled down on the ground by my nieces and nephews or with a book or my Kindle in my hand if I’m not watching Doctor Who, Castle, Vampire Diaries, Revolution, Dexter, etc etc.  The list of favorite shows will go on and on.  I LOVE TV!

Sometimes, if I’m not completely swamped by other things, you can find me crocheting a blanket I’ve been working on for two years now.

I love music, but I don’t have a favorite artist.  I mostly listen to Christian music, but sometimes I listen to rock or pop rock.  Sometimes country.  It just depends on my mood.

My favorite authors are too many to name!  But I can tell you that Dean Koontz was my inspiration for starting the writing process to begin with.

I am a dog person!  I have a beautiful basset hound named George that is my baby!

Joyce: What does freedom mean to your characters?

Emerald Barnes: Freedom to my characters means finding release from the tragedy that happened in the book, Piercing Through the Darkness.  Kandi has already found freedom when the book starts.  She has repressed the memories of the horrible accident, but Jonathan, the man whose life was shattered, hasn’t found anything resembling relief.  He wants it though, and when he finds out that Kandi is pretending nothing has ever happened, he finds that freedom by seeking out revenge. Jimmy, Kandi’s best friend, is in search of freedom from that accident because he feels like it’s his fault to begin with. 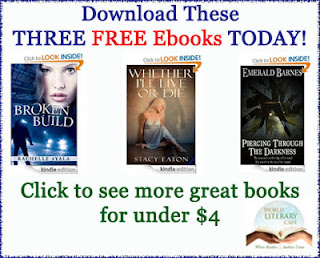 More on Piercing Through the Darkness, Emerald Barnes, and Links

About Piercing Through the Darkness

It’s on the edge of her memory like a word on the tip of her tongue, but Kandi can’t remember what it is to save her life. 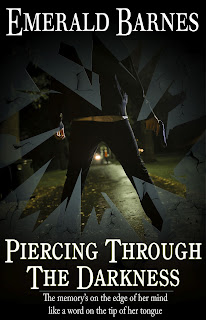 Despite being a cop, Jimmy can’t protect Kandi from the one thing that haunts her. She’s in danger and doesn’t even know it. After it happened, her brain repressed her memories of the accident, and now, she’s taking a Biology class under a man who wants to see her dead. The memories have started coming back, and it feels like she’s miles away from him. How can he protect her when she doesn’t even know she needs protecting?

Can these characters pierce their way through the darkness?


"How Does She Do It?" in Piercing Through the Darkness.

Tony asked, “What’re we gonna do?”
Jimmy said, “I’m not sure.  I’ve been thinkin’ about it a lot today, but I haven’t come up with anything.  If we tell her, she’ll be devastated again, and we all know how bad that was the first time.”
“Her forgetting was a blessin’,” Aaralyn added.
Jimmy nodded in agreement.  Tony sat there.  He wondered what the ex-National Guardsman was thinking.
“What if he tries to get revenge or something?” Aaralyn asked before taking a bite of her food.
“That’s what I’ve been thinkin’.  You know he has to hate her.”
She nodded.
“I just can’t figure it out.  Sometimes I think we made a mistake lettin’ her forget.”
“You know what happened when we brought it up, Jimmy,” Aaralyn reminded him.
Jimmy nodded, and Mrs. Aaralyn stared at her food remembering the day Kandi forgot.  Kandi had woken  up one morning happy which wasn’t normal after what had just happened.  For months after the accident, she’d been like a zombie.  She never smiled and barely acknowledged anyone.  She was hardly passing her classes at school.  She didn’t care anymore, and honestly, he would’ve been the same way.  Even he felt guilty for what happened.
Tony said, “We can’t tell her.”
Startled out of his memories, Jimmy stared back at Tony like Aaralyn was.
“How come?” she asked.
“Our daughter is normal again.  Do you want to go through that again?”
They all had a hard time dealing with it.  Jimmy didn’t want her to go back to the way she’d been when she found out, but he didn’t want to risk her life to keep her normal.
“Are you sure this is a good idea?” Jimmy asked.
He didn’t want to square off with her dad, but he was still questioning Tony’s judgment.
“Jimmy, you know as well as we do that Kandi can’t handle what happened.”
“But it happened!   She has to accept it.”
“Why do you want her to know so badly?”
“I don’t.  I think that it’s dangerous for her not to know.”
“Has he threatened her?”
“Not that I know of, but she’s getting this weird vibe from him.  Don’t you think she ought to know the reason why?”
“Absolutely not.  Until there’s more of a threat, I think we should leave things the way they are.”
No one said anything after that.  It was as if whatever Tony said was what they would do.  Jimmy still wasn’t sure if Tony was right in his assumptions or not.  Maybe things were best to leave them as they were for the time being.  Maybe Jimmy was being paranoid after all.  He was worrying about her like he always did.

Emerald Barnes graduated with a B.A. in English with an emphasis on Creative Writing at Mississippi University for Women.  She resides in a small town in Mississippi and has the accent to prove it.

She's the author of two books.  She mainly writes suspense/thrillers in the YA genre, but she dabbles in other genres and her books are enjoyed by all ages!

She's constantly working on new novels and has more ideas than she knows what to do with.  She blogs at yaindie.com, emeraldbarnes.blogspot.com and ebarnes23.wordpress.com which takes up more of her time than she anticipates but loves it so very much!  She's also a volunteer at the World Literary Cafe which is so amazing!

She's an auntie to two beautiful nieces and two handsome nephews who take up the other half of her time, but she couldn't imagine spending her time in any other way!

She's a Whovian, a little bit of a nerd, a reader, a writer, and a family-oriented person.